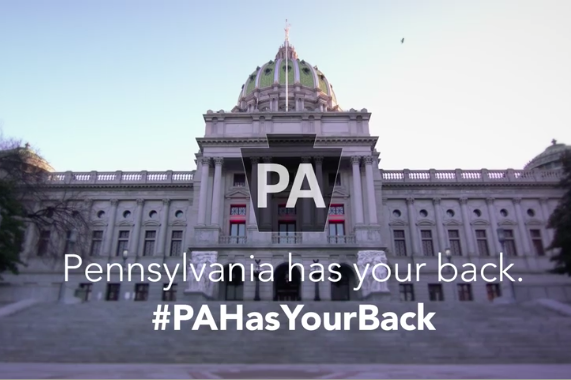 Governor Wolf's office releases inclusive "PA Has Your Back" video.

Pennsylvania Gov. Tom Wolf broadcasted a strong message to the state's residents Wednesday – "Pennsylvania has your back."

It's a new public service announcement that comes in the form of a 1:12-long video preaching a message of inclusivity in the state. It features a number of state officials including Department of Corrections Secretary John Wetzel, Secretary of Education for the Commonwealth of Pennsylvania Pedro Rivera, Physician General for the Commonwealth of Pennsylvania Dr. Rachel Levine, and others.

Wolf, however, is not featured.

While no specific incidents were mentioned, Wolf's office is certainly not wrong. The majority of the black members of the University of Pennsylvania's freshman class were invited to participate in a racist GroupMe called "N***** Lynching" just earlier this month. Swastikas and other racist messages were found in one Bucks County high school, too, while a Villanova student said she was knocked to the ground by a group of males shouting, "Trump, Trump, Trump."

These incidents, however, join many others like them around the country.

Schools are encouraged to contact the Office of Safe Schools if an incident occurred.

The Office for Safe Schools Bullying Prevention Consultation, a bullying hotline, is also available to call at 1-866-716-0424, Wolf said. National incidents of hate or injustice should be reported to the Hate Crimes Hotline at the U.S. Commission on Civil Rights at 1-800-552-6843.

The city has also put together a list of resources to protect citizens following recent events.

"Calling someone by any type of slur, defacing a building, or participating in a flash mob, does nothing to help preserve the values of diversity and inclusion that make Philadelphia strong," Mayor Jim Kenney said in a statement.