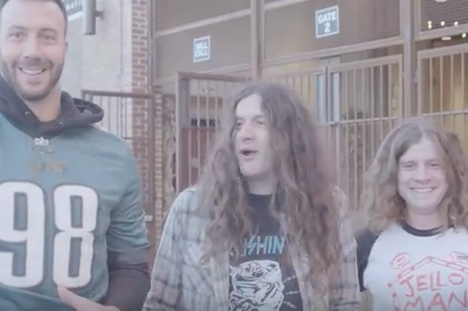 On a day when the flailing Eagles got blown out by the Cincinnati Bengals, now is about as good a time as any to look ahead to 2017.

RELATED ARTICLE: Connor Barwin will only eat from this pizza place in Philly

As Eagles fans well know, defensive end Connor Barwin is an active presence in the city's cultural scene, occasionally partnering with music venues to advance projects through his Make The World Better foundation.

One of Barwin's local friends is none other than psych-folk rocker Kurt Vile, a man Philadelphia has memorialized with a mural in Fishtown.

Earlier this year, Barwin talked to Pitchfork about his musical friendships and revealed which local acts take an interest in the fate of the Philadelphia Eagles. At the time, Barwin found it funny that Vile takes "no interest" in the Eagles.

Clearly, Vile has been converted, at least as long as there's a little quid pro quo involved. The video below is Matador Records' promotion for the upcoming New Year's Eve concert at The Fillmore Philadelphia. Vile will be backed by opening acts Woods and Nathan Bowles.

Who knew the usually laid back Vile had this kind of Rick Flair in him?

Tickets for the December 31 show are available for purchase here.