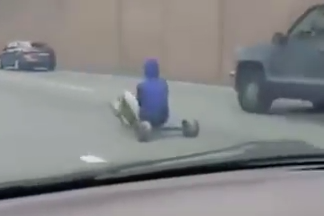 Screengrab from undated video of man who allegedly rode a big wheel on Interstate 76 in the Philadelphia area.

Way back in 1969, Pennsylvania toy manufacturer Louis Marx and Company invented the low-riding big wheel tricycle as a safer alternative to bikes and trikes for kids between the ages of eight and ten years old. The torch was later carried by Empire Plastics and the neighborhood mode of transportation remained popular until Bart Simpson rode into the American family on a skateboard.

The big wheel was officially inducted into the Rochester-based National Toy Hall of Fame in 2009.

"Kids on Big Wheels sought out bumps, corners, and pavements where they could pick up speed. Even older children thrilled at the g-forces. The Big Wheel also gave them mobility along with a measure of independence."

Apparently, some grown man in the Philadelphia area saw fit to take his big wheel out for a ride on Interstate 76, much to the confusion of drivers stuck in slow-moving traffic.

The caveat on the video below, published Monday by local Facebook humor account Meanwhile in Philly, is that we have no factual information about when this happened or where on the highway it occurred. (Note: Video contains explicit language).

A couple things stand out about this. First, it's a great relief that the guy riding the big wheel is not eight to ten years old, or else this would be much bigger news. Second, the fellow who filmed this incident really deserves a special round of applause for his relaxed, humor-first demeanor behind the wheel, even as a minivan swerves out of the way of the rider.

Some commenters on Facebook have pointed out that the guy on the big wheel was traveling at about the same rate of speed traffic usually permits on I-76.

Most believe that this man deserves serious consideration for a Darwin Award, even though he did not successfully chlorinate the gene pool.