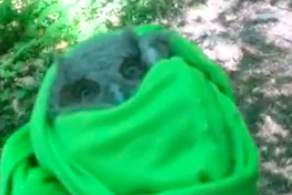 Then, during an afternoon trail run, she sprung into action to save an injured owl she encountered in distress.

Cutting my long trail run short. Just found this injured owl. Going to try to capture it & get it help #wishmeluck pic.twitter.com/QcBdTIXa9G

In the whole heroic process, Tynan produced some of the most heart-melting videos we've seen of these wise nocturnal creatures since a baby owl confronted a Colorado deputy last summer.

Got him! Heading to the @SchuylkillCtr Don't die on me, little buddy! pic.twitter.com/9vH2iA024z

After posting her discovery on Twitter and Facebook, readers suggested that Tynan rush the wounded owl to Schuylkill Wildlife Center.

Eventually, despite concerns about the E.T.-looking 'lil guy, Tynan got the owl to the Wildlife Center for treatment.

Thx so much 2 the hard workers @SchuylkillCtr for taking in "my" baby screech owl. Full update on my FB page at 4:30 pic.twitter.com/iEjnfKFEY0