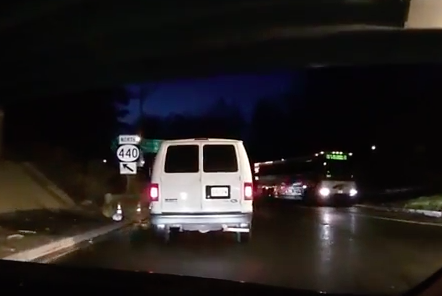 A commuter's dashcam video showing a N.J. Transit bus travling the wrong way on the Garden State Parkway has the transportation agency searching for a logical explanation.

The Thursday morning incident, first reported by NJ 101.5, occurred in Woodbridge during the early morning hours as the driver traveled near Exit 127 in the township's Keasby neighborhood.

Video of the incident, released on Sunday, shows the NJ Transit bus pull to the shoulder of the exit ramp at a point where all traffic lanes are one-way. The interchange allows drivers to take Route 440 North or Smith Street in Perth Amboy. The bus appears in the video at about the 42 second mark.

A spokesman for NJ Transit told NJ 101.5 the agency is "vigorously investigating" the incident and that customers who see unusual traffic behavior by their fleet should not hesitate to report it.

The incident comes as NJ Transit faces ongoing scrutiny over the deadly September crash of a commuter train in Hoboken.