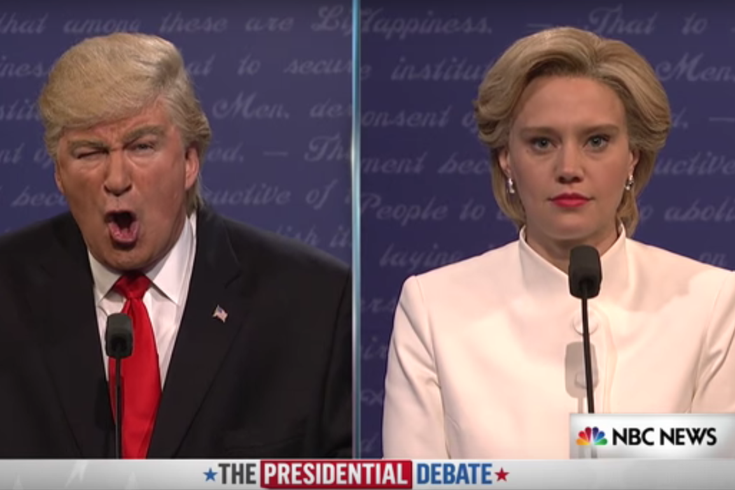 This week's episode of "Saturday Night Live" opened with the absurdity that is the presidential race and brought the funny once again.

Kate McKinnon's Hillary Clinton and Alec Baldwin's Donald Trump poked and prodded each other just like their real-life counterparts did during the third and final presidential debate.

'SNL' even utilized the uncommon tactic of using the guest host in the cold open. It's hard to argue with that decision when someone with the versatility of Tom Hanks, who was hosting for the ninth time, is at the writers' disposal.

Portraying Fox News host and debate moderator Chris Wallace, Hanks set the tone of the nearly 10-minute skit with a warning that watching the debate would be "like the third Lord of the Rings movie, you don’t really want to watch, but hey you’ve come this far."

After promising a more subdued performance, Baldwin's Trump immediately blurted out "They're ripping babies out of vaginas!" when asked the first about reproductive rights.

Later in the skit, the faux-Republican nominee was able to work in his "bad hombres" and "nasty woman" lines, much to the delight of the live studio audience.

Meanwhile, McKinnon's Clinton was more than happy to sit back and allow her opponent to wither in the spotlight. When asked to explain her ongoing email scandal, she took her campaign manager's advice and dodged the question by bringing up Trump's treatment of women.

Baldwins' Trump also repeated claims that the process was rigged and would not accept the results of the elections if he lost.

To conclude, McKinnon's Clinton made one final pitch to voters.

"Listen American, Donald Trump can not be president. He would be a disaster, a failure, a complete 'F.' And America, you deserve better than an 'F.' So on Nov. 8, vote for me and I promise I will be a stone-cold "B," the fake Democratic candidate said with a wink.