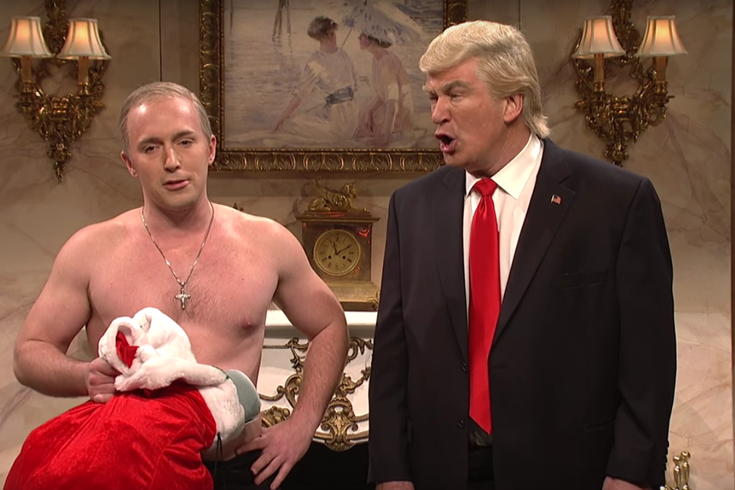 'Saturday Night Live' had one final opportunity to a put a bow on the whirlwind election year that was 2016 and the show took aim at the major presidential candidates.

Both President-elect Donald Trump and Electoral College runner-up Hillary Clinton were spoofed in Christmas skits during the show, which was hosted by Casey Affleck with musical guest Chance the Rapper.

Alec Baldwin returned to portray Trump for the first time since the president-elect publicly criticized his impersonation.

In the episode's cold open, Baldwin's Trump was holed up at Trump Tower with Kellyanne Conway (Kate McKinnon) as work continued on setting up his administration.

Trump was suddenly interrupted when Russia President Vladimir Putin (Beck Bennett) appeared from the chimney shirtless and bearing gifts. Putin wanted to show his appreciation for Trump's victory, praising him as "the best candidate, the smartest candidate, the Manchurian Candidate."

Putin offered an Elf on the Shelf, prodding Trump to "put it right here next to your internet router."

The pandering ended when Rex Tillerson (John Goodman) stopped by for his meeting with Trump. The surprise visit delighted Putin who exchanged an elaborate handshake with his old friend.

Trump became an afterthought as Putin and Tillerson discussed plans to allow Russian oil to flow more efficiently and ignored Trump's plea to say "Live from New York, it's Saturday night" together.

Later in the show, McKinnon donned her Hillary attire as Clinton made a last-gasp attempt to save the world from a Trump presidency.

Clinton was not asking for her vote, rather she urged a vote "for literally anyone else, like John Kasich, Tom Hanks, Zendaya, The Rock or a rock."

To drive her point home, Clinton wrapped up her pitch with a dire warning, "If Donald Trump becomes president, he will kill us all."