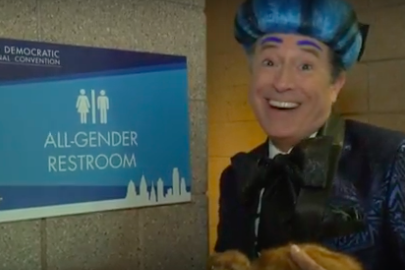 During a week of live broadcasts of "The Late Show with Stephen Colbert," it was a foregone conclusion that the lovable satirist-media critic would find a way to drip sarcasm on the proceedings of the Democratic National Convention.

Last week, Colbert took his hijinks to Cleveland, where he attempted to gavel open the Republican National Convention. In a pre-taped segment that aired Monday night, Colbert staged his "Hungry for Power Games" at Philadelphia's Wells Fargo Center. Dressed in full costume, Julius Flickerman and his stinky pet weasel Caligula tour the amenities and walk the convention floor.

If you learn nothing else from this video, you'll at least appreciate that Stephen Colbert is an excellent harmonist.