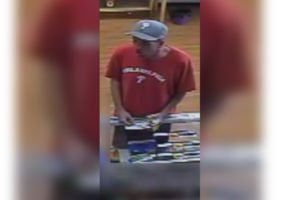 Police are seeking help to identify this man, who law enforcement officials said, sprayed some type of flammable fluid on a store clerk during a robbery in Mayfair.

A store clerk was sprayed with a flammable liquid during the robbery last week of a cigarette shop in Northeast Philadelphia, police said.

On Tuesday, Aug. 30, at about 10:30 a.m., a white male wearing a red Phillies shirt and carrying a plastic water bottle filled with a yellow liquid, stepped into Sunny’s Cigarettes in the Mayfair Mall on the 6400 block of Sackett Street in Mayfair.

The suspect, believed to be about six-feet-tall and weighing about 170 pounds, then placed a yellow plastic bag on the counter and demanded money from the 29-year-old clerk.

The clerk told police that during the robbery, the suspect sprayed the contents of the water bottle he was carrying on the store employee. The clerk then realized he had been sprayed with some type of flammable accelerant.

As the video shows, the suspect sprays the chemical on the employee, then holds out a lighter toward the clerk while he opens the cash register and begins to fill the plastic bag with money.

The suspect fled with an undisclosed amount of money and was last seen running toward Frankford Avenue, police said.

Police believe the suspect has a tattoo on his right forearm and a second tattoo on his neck, and is missing his front teeth. He was wearing a red Phillies t-shirt, light blue Phillies cap with a "P" logo, as well as black shorts with a red vertical strip and white shoes.