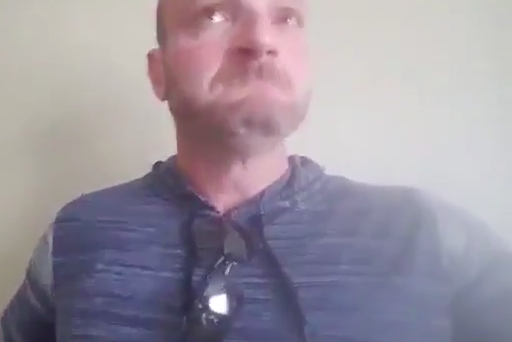 Chris Cantwell, a prominent white supremacist who marched in Charlottesville, becomes emotional in video after learning of a warrant out for his arrest.

In the tense week after an ideological battle turned deadly in Virginia, one of the most powerful documents to emerge from the conflict is Vice News Tonight's "Charlottesville: Race and Terror."

The mini-documentary, led by Vice correspondent Elle Reeve, contains extensive footage of her time with the white supremacists and neo-Nazis who marched to spread their message of racial and religious hatred beyond its familiar realm on the internet.

Footage from the special, picked up by major news outlets including CNN, helped turn the mini-doc into a viral juggernaut, capturing millions of viewers on multiple platforms as HBO distributed it freely.

One of the men featured in the special is Chris Cantwell, the alt-right radio host of Radical Agenda and a frequent speaker on topics including how to combat the tactics of leftist opponents. For an idea of Cantwell's political approach, consider that his YouTube page was terminated "due to multiple or severe violations" of the site's policy against content designed to harass, bully or threaten.

On Wednesday, Cantwell uploaded a tearful video in which he said he was told that Charlottesville police have a warrant out for his arrest.

"I’m terrified," Cantwell said in the video, addressing police. "I’m afraid you’re going to kill me, I really am.”

Cantwell laments the fact that national networks have keyed on the hateful and violent rhetoric of white pride groups, claiming that their intention all along has been to remain peaceful.

The issue with Cantwell's emotional video is that it contradicts nearly everything he said as one of the ringleaders of the protests featured in Vice's mini-documentary.

At one point, Cantwell told Reeve, "We’re not nonviolent, we’ll f------ kill these people if we have to," later adding that he carries a pistol and goes to the gym all the time "to make myself more capable of violence."

At least one YouTuber put together a mashup of the disconnects between the Cantwell we see in the Vice mini-doc and the one we see in Wednesday's video.

Cantwell claimed Wednesday that he will surrender to police and go to jail if he must, although he does not believe he should. He said that while he admits to engaging in violence in Charlottesville, he felt it was only in defense of himself and others.

"Everybody and their mother wants to ruin my life, okay?" Cantwell said. "And if I wanted violence, it's not a difficult thing for a guy like me to find."