The 15-foot inflatable came to Center City to highlight 'parallels' 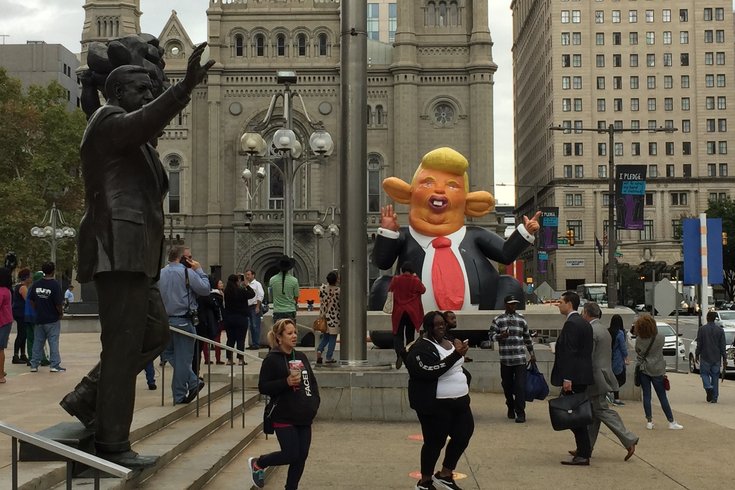 The art dealer and local activist who teamed up to bring the 'Trump Rat' to Philadelphia on Monday said they did so to 'celebrate' the birthday of late former Mayor Frank Rizzo.

Even if they wanted to, people walking past Philadelphia’s Municipal Services Building couldn’t avoid seeing it.

That’s right: The rather disturbing, 15-foot-tall “Trumpy the Rat” inflatable monument made its way to town on Monday afternoon to celebrate the birthday of the late former Mayor Frank Rizzo.

Soon, he hooked the rodentine protest piece up to an electronic pump and over the course of mere minutes, it grew to full height, becoming the talk of Center City on many a level.

To hear Faye Anderson of Avenging the Ancestors (ATAC) tell it, she randomly bumped into Lee near New York City’s High Line last week and told him about the ongoing controversy regarding the future of the Rizzo statue. (ATAC is a broad-based coalition of African-Americans, including  historians, attorneys, concerned citizens and elected officials.)

That encounter led to an idea: Let’s bring the “Trump Rat” to Philly on Rizzo’s birthday to make the political point that the two men were pretty similar in how they comport themselves as public leaders.

“There are parallels between Ratso (Rizzo) and Trump that cannot be denied,” said Anderson, who lobbied for the Rizzo statue’s removal, as the inflatable took shape. “Rizzo paved the way for Trump.”

For his part, Lee said it’s not a particularly political person. He’s more of a “humanist and progressive.” That said, he maintained that Trump’s election put the country “in a horrible place and a new low point in American history.

“As bad as George Bush 1 and 2 were, they were at least presidential. What’s happening now is just grotesque,” said Lee, 58, who attended Friends Select School. “(Rizzo) was corrupt, and Trump is corrupt beyond belief.”

So earlier this year, he launched a Kickstarter campaign that raised $10,000.

The “Trump Rat” was then created by Inflatable Images in Brunswick, Ohio and has made several noteworthy appearances in other cities throughout the year. 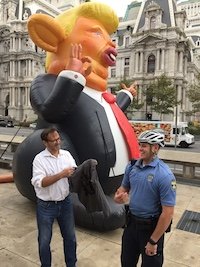 John Post Lee, who commissioned the 'Trump Rat' inflatable after a Kickstarter campaign, shares a lighter moment with a Philadelphia police officer outside the Municipal Services Building on Monday, October 23, 2017.

It didn’t take long on Monday for the inflatable to capture the attention of passersby with mobile-phone cameras at the ready. Also noticing were police officers, who engaged in discussions with Anderson and Lee about the apparent lack of proper permits for the display.

When one couldn’t be produced in a timely manner, the rat was deflated, moved and then reinflated on the John F. Kennedy Boulevard sidewalk.

In its first spot on the Plaza, it faced the side of the Rizzo statue. Now, it was directly in front of it.

While Lee was loathe to wade into the whole Rizzo statue-removing controversy, he said, “we need less divisiveness” in the world.

Some passersby shared anti-Trump sentiments aloud. Others just walked by shaking their heads.

For her part, 73-year-old Jo Long of Mt. Airy bridged the ideological gap to a certain extent.

“Even though I don’t like him, this is blasphemous,” she said. “As president, he should be respected.” 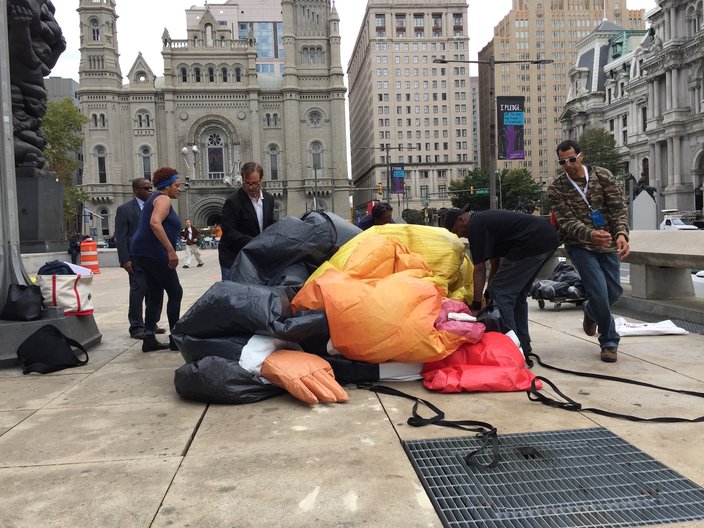 After discussions with Philadelphia police, protesters moved the 'Trump Rat' to the sidewalk along JFK Boulevard. 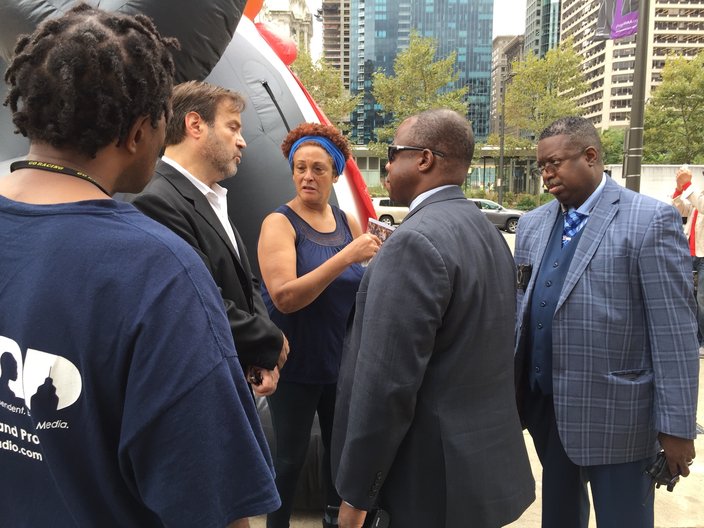 The lack of a permit for the 'Trump Rat' led to discussions between police and protesters in Center City on Monday. 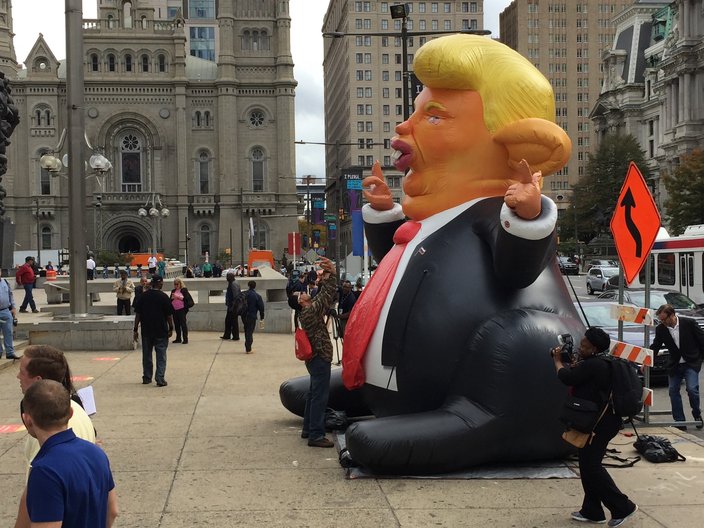 One passerby let his feelings about Donald Trump be known at the 'Trump Rat' in Center City Philadelphia on Monday, October 23, 2017. 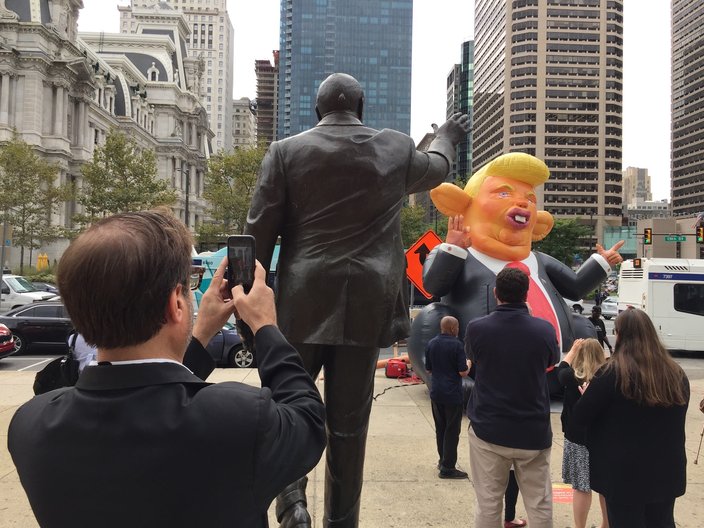 The inflatable 'Trump Rat' eventually made its way to the sidewalk in front of the Municipal Services Building in Center City Philadelphia.