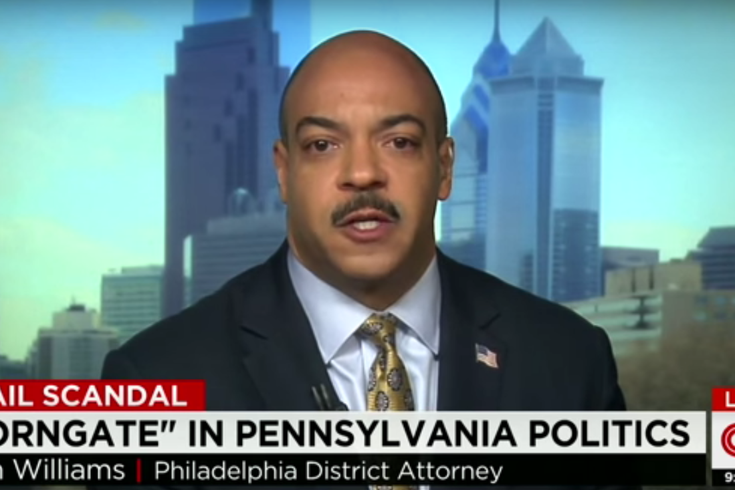 Following articles about how state politicians exchanged offensive emails being published on news sites such as Complex, Fusion and Gawker towards the end of 2015, District Attorney Seth Williams - whose office is embroiled in the mess - appeared on CNN to discuss the scandal Saturday morning.

Speaking to network host Michael Smerconish, a Doylestown native himself, Williams was asked about his three employees who sent the emails, which included pornographic and racially insensitive material, and why he didn't fire them.

Williams quickly turned the attention towards embattled Attorney General Kane over her failure to prosecute six black Philadelphia lawmakers accused of taking bribes, saying her release of the emails was part of a personal vendetta to embarrass one of those employees - Frank Fina - who used to work in her office.

Kane declined to bring charges against the lawmakers, all of whom are black, citing racism. Fina then allegedly leaked the information to the Philadelphia Inquirer. The newspaper ran a story about her shutting down the undercover sting.

"When she didn't take those cases, and it came out, all she had to say was in her prosecutorial or professional discretion, she chose not to prosecute those cases," Williams told Smerconish. "Instead, she said that they were racist and that the prosecutors and investigators were racist.

"For two years I had to bite my tongue, because I knew otherwise."

When Fina became a prosecutor in Williams' office, the cases were reopened, leading to charges and eventually pleas from five of the lawmakers. One of the legilastors, state Rep. Vanessa Lowery Brown, has a court date set for Jan. 11. As payback, Kane allegedly leaked secret grand jury information in an attempt to get back at Fina. She faces obstruction of justice charges as a result.

Williams dismissed Kane's allegations of racism when charges were filed in March. He told Smerconish Kane's been using a "false narrative" to push a "personal vendetta" since.

Smerconish followed up by pressing Williams about the emails and the three employees he hired who sent them, citing City Council's vote calling for the him to fire them.

Williams said he believed in due process, even for the three white prosecutors.

"I had a very systematic method of investigating what happened," Williams said. He reassigned the three employees in December after ordering them to undergo sensitivity training in September.

"The emails are ignorant, and, [it's] just terrible that people would do this," Williams said. However, he noted that they worked for the Attorney General's Office, not him, when the emails were sent, and said two of them were only recipients of the messages.

Williams called for the release of all the emails, not just the ones that implicate his three employees, as Pennsylvania deserves to see how far back the scandal goes. He added that Kane and her twin sister, also a state prosecutor, reportedly received some of the emails themselves.

Smerconish asked Williams if he was worried about the integrity about some of his prosecutors, as some of the emails contained offensive portrayals and remarks about African Americans.

Williams answered by citing the reassignments, specifically taking them off of active criminal cases, and the sensitivity training for the three employees. He again took aim at Kane for promoting an employee previously suspended for sharing the emails.

He wouldn't rule out the possibility of firing the three employees when asked, saying he would continue to evaluate the case if new information was made available. Watch the interview below: