Scene at LBI underscores power of nature at work 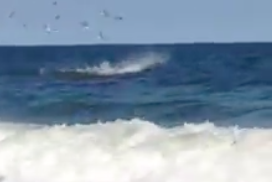 Something sort of like that happened Tuesday afternoon on Long Beach Island, where summer traveler Kristen Kelly witnessed a pair of sharks feast on a dolphin. In a video post on her Facebook page, Kelly said the dolphin had been struck and wounded by a boat propeller before the attack.

Seeing this in person might be especially disturbing, albeit an example of nature at work, but at least the dolphin was spared, in one sense, the probably lengthier suffering of the propeller injury.

There were apparently several dolphins swimming around Long Beach Island on Tuesday, according to Facebook user Anna Ricci, who also confirmed the dolphin's boat injury.

Last year, a much grislier photo of a half-eaten dolphin in North Wildwood surfaced on Facebook and went viral amid speculation that it was killed by a shark. A specialist from the Brigantine-based Marine Mammal Stranding Center said that the dolphin, a newborn bottlenose, likely died before it was eaten.

"People must feel that the natural world is important and valuable and beautiful and wonderful and an amazement and a pleasure," Attenborough once said, always cautioning against a fable of complete harmony in the wild. He also said humans are "a plague on the Earth," but that's a different story.