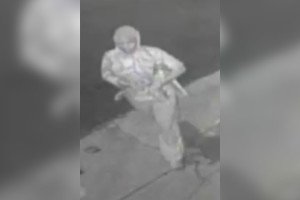 The Philadelphia Police are hoping to identify this woman, who law enforcement officials believe is responsible for setting cars on fire in North Philly.

Philadelphia police are seeking help from the public to identify a woman who they believe set two vehicles on fire in North Philly during the early morning hours of Thursday, May 12.

According to police, at 4:45 a.m. on Thursday, the city's arson task force responded to the 3200 block of North 11th Street with the Philadelphia Fire Department to extinguish fires in two vehicles on the street.

In the surveillance video, a woman can be seen placing an object on one of the vehicles and running off. The object bursts into flames as she stops to watch the fires burn.

Police said the fires were confined to a 2005 Toyota Solara and a 2015 Honda Civic and there no injuries reported during this incident.

The suspect – described as a female wearing a light-colored shirt with a zig-zag design – fled the area, police said.