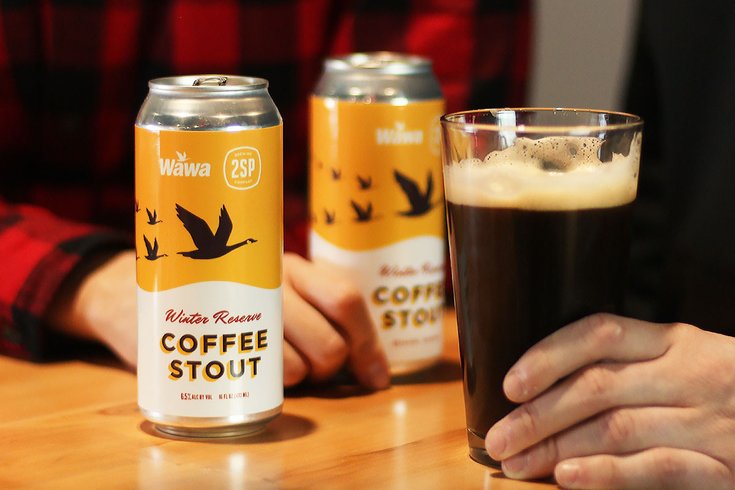 Coffee drinkers who exclusively prefer Wawa – and there are a lot of those in Philly – will find a familiar taste with 2SP Brewing Co.'s newest craft beer release.

A couple months ago the team at Delco's 2SP, recovering from a grueling staff meeting, noticed they all happened to be drinking different blends of Wawa coffee. From there, the idea struck to create a brew using a Wawa coffee blend.

After members of the Wawa team visited 2SP – their respective headquarters are less than eight miles apart in Delaware County – the teams decided on joining Wawa's new Winter Blend coffee with a 2SP oatmeal stout.

The Winter Reserve Coffee Stout (6.5% ABV) will feature flavors of sweet clove, dark chocolate, and graham crackers – but getting a taste for yourself will require you to act fast, as production is limited to just 1,000 cases.

The wider release of the Winter Reserve Coffee Stout cans will be Monday, Dec. 10, and you can expect to find them at Philadelphia metropolitan area bottle shops and craft beer bars.

But for the more ambitious craft beer drinkers seeking an early tastes of the beer, 2SP and Wawa will preview the brew at the Chadds Ford Wawa, 721 Naamans Creek Road, on Thursday, Dec. 6. from 4 to 6 p.m.

During the sneakpeak complimentary tastings will be offered, as well as a chance for customers to purchase four-packs (limit 2 per customer) of the first 50 cases. Winter Reserve Coffee Stout will go for $12.99 per four-pack on a first come, first serve basis.

Bob Barrar, 2SP's head brewer, will also be at the Wawa preview along with Wawa's coffee expert Michael McLaughin to cut the ribbon on the new collaboration.