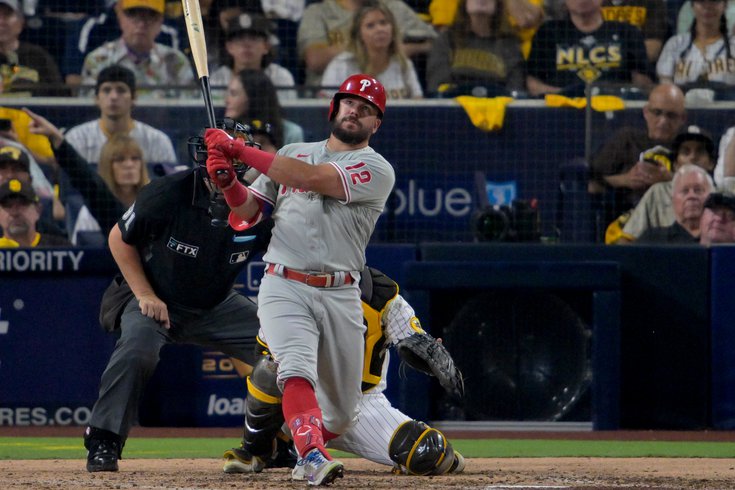 Wawa is partnering with the Phillies' Kyle Schwarber and reprising summertime tradition Hoagiefest during the playoffs. The deal includes discounted Shortis and Classics. Above, Schwarber watches the home run he hit in the sixth inning of Game 1 against the San Diego Padres. It was the longest homer ever at Petco Park.

The defining figure of Philly sports this past June was Kyle Schwarber. The Phillies' left fielder hit 12 home runs with an OPS of 1.065 that month, alone, on his way to the All-Star game, a streak that spawned #JuneSchwarber.

June also is the month that traditionally marks the beginning of Wawa's HoagieFest, the convenience store chain's summertime promotion of discounted hoagies.

Given that coincidence, and the Phillies playoff run, Wawa and the Phils' slugger have partnered for a limited-time "SchwarberFest" deal, the company announce Tuesday. And right on cue, Schwarber hit a bomb in Game 1 of the NLCS against the San Diego Padres – a mammoth home run that exited Petco Park faster than Wawa is closing stores in Center City.

The details of SchwarberFest are similar to Hoagiefest: $5 Shortis and $6 Classics when customers order and pay using Wawa's app during the postseason. The store also announced it is making a $25,000 contribution to Philabundance. From Wawa's press release:

In June and July when Philadelphia fans were watching Kyle Schwarber kiss over 20 home runs goodbye on his way to being one of the best power hitters in the baseball, at Wawa, we were celebrating our annual HoagieFest campaign, a 13-year tradition of discounting hoagies each summer. As Philadelphia made the playoffs for the first time in 11 years, some fans and outlets on social media asked why Wawa couldn’t host a special return of the Hoagiefest promotion in honor of this performance and the team’s success. So, just as Kyle and the team are giving it their all to bring home a championship to Philadelphia, Wawa is thrilled to introduce “SchwarberFest” and hopes fans keep dancing on their own couches and in the ballpark this week!

A Kyle Schwarber twist on HoagieFest from Wawa.