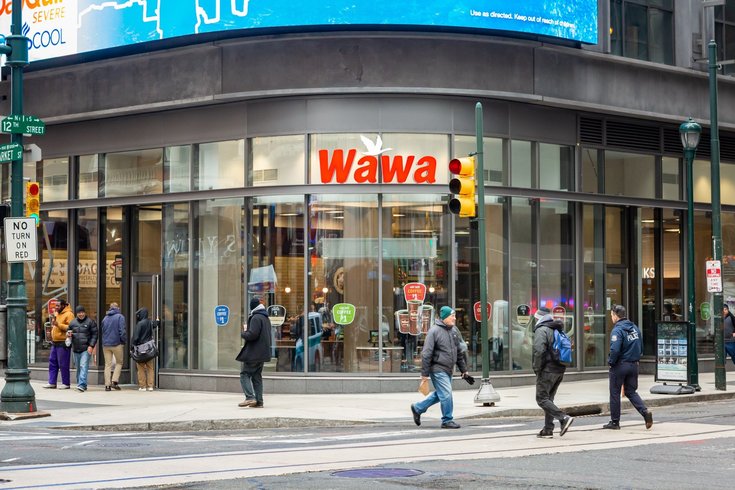 This photo shows the Wawa store at 12th and Market streets in Center City Philadelphia. According to Food & Wine magazine, Wawa is home to the best fast food in Pennsylvania. We (mainly) agree.

Pennsylvania's great gas station-and-convenience store battle, which pits Sheetz against Wawa, will never end. It's like that huge fire in Turkmenistan: unstoppable, and full of hot air.

All either side can do at this point is rack up evidence for their respective store, so here's something for those who (rightfully) champion Wawa's cause: according to Food & Wine magazine, Wawa has the best fast food in Pennsylvania.

If you prefer something like McDonalds when you think of fast food, that's okay: Food & Wine is talking about regional specialties. For example, something called Eegee's won in Arizona. The list is eschewing the heavyweights for the spots you can only find in a specific area, like a Wawa — at least, for now.

Here's a portion of what the (surprisingly detailed) article had to say about Wawa:

"There are sports rivalries, and then there are the regional convenience store rivalries that are a very real thing to Pennsylvanians, and the source of endless, mild entertainment to outsiders. Try the rest — Sheetz, Rutter’s, Turkey Hill, GetGo, we’re probably missing one or two — and then try the best, which is not only a gas station and a convenience store, it’s also the most popular destination for a quick and affordable bite for generations of hard working people in the southeastern part of the state, and increasingly, beyond."

The Wawa blurb goes on to mention the chain's hoagies, the coffee program, the continuity, and of course the pretzels and iced teas.

It's subjective, as food always is, but when a magazine called Food & Wine names one convenience store superior to its main rival, that's a pretty big win for the store in question. Score one gigantic point for Wawa.

Of course, Sheetz was named the best regional fast food in the country earlier this year by USA Today readers, so who really knows?