At the Jersey Shore, the weather forecast calls for a chance of isolated storms on Friday followed by a mix of sun and clouds 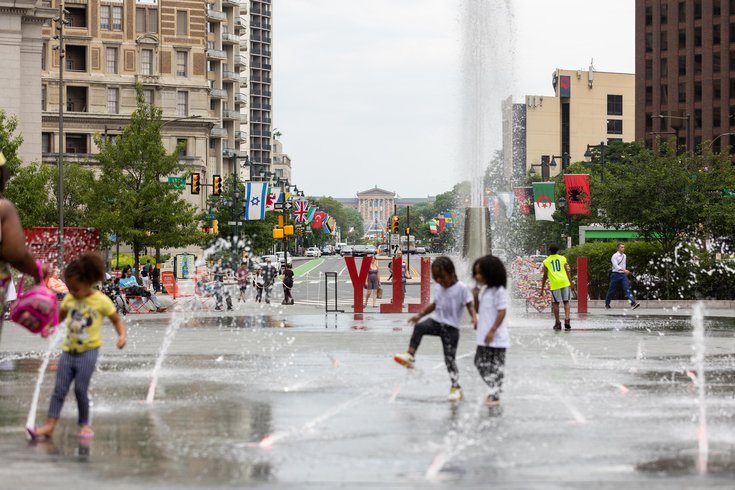 This weekend's weather will be pleasant with low humidity in Philly and the Jersey Shore. In the city there will be a mix of sun and clouds, with temps in the mid to high 80s. The temperature at the show will be in low 80s with a light breeze. Above, children play in the fountains at Dilworth Park.

Who out there is ready for a beautiful weekend? Some clouds will be working in at times, but that won't take away from the overall magnificent feel of it all.

Last weekend, temperatures reached around 100 degrees. This weekend? A walk in the park. Literally, go take a walk in the park, it will be that nice out there. First and foremost, the humidity will plunge. Dew points into the 50s around the city, lower 60s for South Jersey.

Outside of some rain on Friday, there won't be much wet weather. The rain on Friday should be relegated to late day. Barbecuing, pool parties and beaching shouldn't really be impacted, but keep an eye out for some showers in the afternoon. There could be some much needed rain late Friday night into Saturday morning.

There is one issue that a lot of people seem to be talking about: Why is the ocean so cold? Let me explain. I was at the beach in Margate on Sunday and it was blazing hot on the sand – almost too hot to lay out there comfortably for more than a few minutes, but also way too cold in the water. I walked in and couldn't feel my feet for a good 5 minutes! So, what gives? August is next week and we are usually well into the 70s at this point.

It has nothing to do with how hot it's been recently. The wind is the driving force behind the cold water. What happens is winds with a westerly jog (that's west, northwest or southwest) shave off the shallow layer of warmer water and push it out to sea. This allows the colder water from beneath to make it to the surface.

The geography of the state has a lot to do with water temps, too. A southwest wind impacts South Jersey more than North Jersey.

Some of you have said "but my app said the water was 75!" Some of those apps may be pulling data from the off-shore buoy, which has been at 75 – just not along the beaches. Now, back bays will run 5 to 10 degrees warmer than the ocean and the Delaware Bay is basically impervious to upwelling, so those temps stay very warm, as well.

For those asking when it will warm up, it could be a while. Outside of a day or two of an on-shore flow, that land breeze looks to be stubborn.

• FRIDAY: Clouds, some sun, but also a chance of some pop up storms mid to late afternoon and again in the evening and overnight. Highs in the middle to upper 80s. Chance of rain 60%.

• SATURDAY: High pressure builds and it will be mostly sunny. Some clouds mix in at times, but it will be comfortable. Highs in the mid and upper 80s, low humidity. Chance of rain 0%.

• SUNDAY: Clouds and sun mix. Humidity levels stay low and the comfort factor will stay high. Temperatures in the lower to middle 80s. Chance of rain 0%.

• FRIDAY: Mix of sun and clouds and very sticky. Chance of an isolated storm with heavy rain, but most of the day will be dry. The later we go into the afternoon and evening, the greater the rain chance becomes, especially at night. Chance of rain 70%.

• SATURDAY: Great day for the beach, but the water will be chilly. Ocean temps stay in the lower 60s. Looks like a mix of sun and clouds, temps on the sand in the lower 80s. Chance of rain 0%.

• SUNDAY: A few more clouds work into the mix but no big issues, still pleasant with low humidity. Light breeze. Highs in the lower 80s from Asbury to Cape May. Chance of rain 0%.