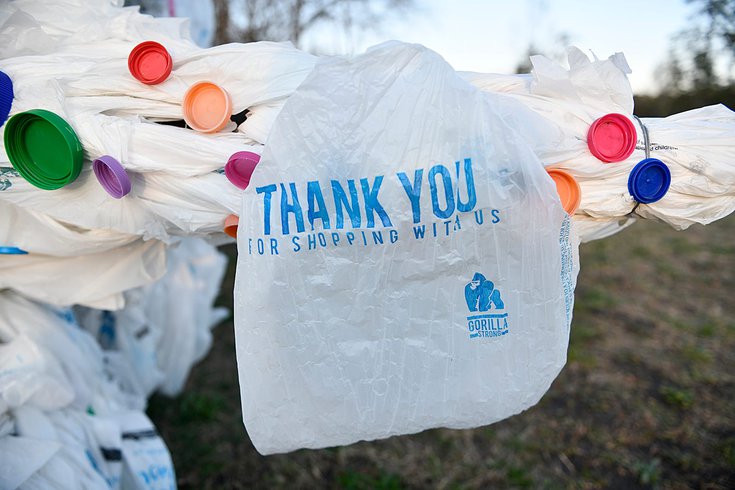 Media Borough is the latest suburban community to ban single-use plastic bags and straws. The ban goes into effect on Jan. 1, though Borough officials cannot issue violations or citations to businesses until June 30. Radnor and Tredyffrin Township are currently working to pass similar single-use plastic bans.

Media is the latest suburban community to ban single-use plastic bags and straws, as its Borough Council recently approved an ordinance meant to curb the amount of litter on streets and parks in the Delaware County town.

The ban is set to go into effect on Jan. 1, 2023, and applies to plastic bags, straws, and stirrers provided at the point-of-sale of any commercial business, including food take-out materials and other items that cannot be recycled. It does not apply to newspaper bags, product bags, or food storage bags that are often sold in grocery stores.

Any business that does not comply will be given a written warning before fines are issued per reported offense. Fines start at $50 for a first offense, $100 for a second, and $300 for a third and any subsequent offenses. In order to keep up with business needs, owners can choose to provide paper bags to customers made with at least 40% recycled materials, and could add a 10-cent surcharge.

"We just think it's best for the environment, best for the people of Media, and something that the business leaders in Media will be able to enforce in their own operations," Borough Councilmember Mark Paikoff told WHYY.

Media Borough will be unable to issue citations or violations until June 30, in order to allow time for businesses and residents to become acquainted with signage and educate themselves about the new regulations.

As single-use plastics do not readily decompose, Media Borough's taxpaying residents face the cost burdens associated with cleanup. Alternatives to single-use plastics are already available throughout the borough, including paper bags, reusable plastic bags, and reusable or compostable straws.

Paikoff said that Media's ordinance is modeled after other recently-enacted bans throughout the Philly suburbs in recent months, including West Chester.

West Chester has had success in implementing its single-use plastic ban, which went into effect on Jan. 1. The Republican-led state legislature introduced a bill during the summer of 2021 which would have extended a moratorium placed on plastic bans throughout Pennsylvania.

West Chester, Narberth, Philadelphia, and Lower Merion Township responded to the legislation with a lawsuit, alleging that state lawmakers acted in an "undemocratic" manner by imposing a moratorium on bans that had already been approved by each municipality.

As Philly and West Chester began implementing their bans, other parts of the region followed suit. Haverford Township became the first in Delaware County to pass a ban on single-use plastics in April. The ordinance was introduced as a way to curb plastic litter throughout the community as well, which impacts quality of life in the community.

"Plastic bags are the poster child for the environmental harm caused by single-use plastics," said Faran Savitz, a zero-waste advocate at Penn Environment who spoke on the Haverford ban in April. "Nothing we use for a few minutes, such as single-use plastic bags, should be allowed to litter our communities, pollute our environment, and fill our landfills and incinerators for hundreds of years to come."

Easttown Township in Chester County followed in June, and officials in the township hope that communities throughout Pennsylvania will move their focus to include polystyrene, or styrofoam, in their proposed bans.

Radnor Township and Tredyffrin Township are among those still attempting to pass bans on plastics. Earlier this month, commissioners in Radnor voted 5-1 on preliminary approval to ban single-use plastic bags.

The single commissioner who opposed the measure, Sean Farhy, told Main Line Times & Suburban that he wants to eliminate the 10-cent bag fee from the ordinance in order to keep the regulations cost-free for residents.

Radnor commissioners are expected to vote again on the ordinance in the coming weeks. If passed, the ban wouldn't go into effect for six months in order to provide an educational transition period for businesses and residents.