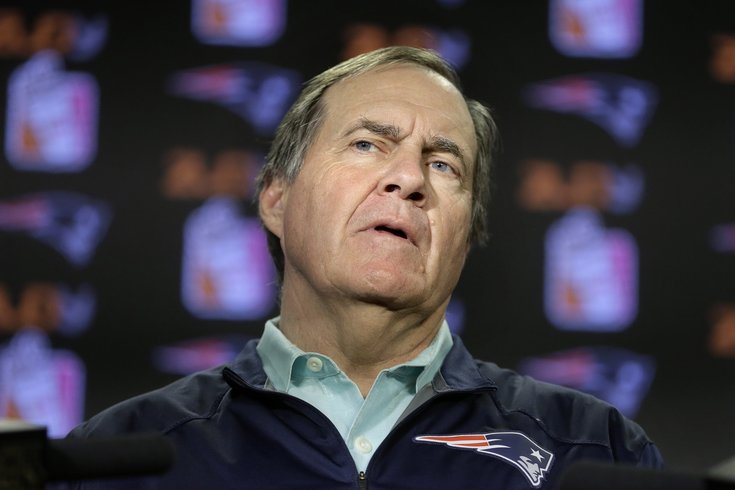 Darth Hoodie isn't even going to bother cheating against the Eagles this week.

For the gambling degenerates, here are my Week 13 picks. To note, the helmets indicate who I think will win the game, not cover the spread. At the end of the picks, I'll note a few teams that I like based on the spread.

Packers (-3) at Lions: In one of the more surprising outcomes of the season, the previously 1-7 Lions went in Lambeau Field and beat the 6-2 Packers. The Lions have won three straight, while the Packers have dropped four of their last five. These teams are currently going in opposite directions. Still, it's hard to pick against Aaron Rodgers, even if the Lions are beginning figure things out.

Cardinals (-5.5) at Rams: Who are the Rams starting now? Nick Foles was benched for Case Keenum a couple weeks ago, who suffered a concussion against the Ravens and could not play last week against the Bengals. So back in went Foles, who threw three picks and got benched again, this time in favor of Sean Mannion. Who's starting this week? Who cares? I'm not even googling it.

Falcons at Buccaneers (-1): After starting 5-0 and looking like a shoe-in for the playoffs, the Falcons have proven themselves to be frauds, and potentially on the outside looking in after this weekend if they can't handle the Bucs. This is simply not a good team. Bucs all day.

Seahawks at Vikings (Pick 'em): "Pick 'ems" are my favorite bets, because they're pure. You don't get those infuriating nonsense backdoor covers. It's just... Pick a team, that's you who got. In this one, I love the Seahawks. The Vikings are playing well this season, but they're giving me a 2013 Eagles vibe. They beat the teams they should beat, but aren't quite there yet against the big dogs.

Texans at Bills (-3): In their last four games, the Texans have held their opponents to 35 points (8.8 points per game). I'm riding the hot hand.

Ravens at Dolphins (-4): From the Eagles' perspective, if the Eagles lose against the Patriots this week, they will move ahead of whichever team wins this game, as both the Ravens and Dolphins have 4-7 records with a draft position tiebreaker advantage over Philly. I feel like the Dolphins are more garbage'y than the Ravens, even with half the Ravens' team on IR.

Jaguars at Titans (-2.5): Normally, this would be a game that you would completely ignore. But again, as noted with the Ravens-Dolphins game above, the 2-9 Titans and 4-7 Jaguars are both currently ahead of the Eagles in the draft order. The higher the Eagles can climb, the better the chance they have of securing a franchise quarterback. As for this game, um, Jags, I guess.

49ers at Bears (-7): The Bears actually look somewhat competent this season, and Jay Cutler is playing reasonably well. Again, not to sound like a broken record, but the 3-8 Niners would be picking ahead of the Eagles if the season ended today, and clearly, they are in dire need of a quarterback. However, I don't see them ruining their draft position this weekend in Chicago.

Broncos (-4) at Chargers: This game feels trappy for the Broncos, who are coming off a huge home victory over the Pats, so I wouldn't touch it. Brock Osweiler has played better than Peyton Manning, and the Broncos are going to have a tough decision to make when Peyton is ready to play.

Chiefs (-3) at Raiders: As we noted last week, Big Red is on fire. The Chiefs' last five games:

Combined score: 160-61. They are +99 over that span. I'll continue to ride the hot hand... until Andy inevitably reaches his playoff loss destiny.

Panthers (-7) at Saints: Like the Eagles, the Saints have played like hot burning garbage the last three weeks, losing to the Titans, Redskins and Texans by a combined score of 105-48.

Eagles at Patri*ts (-10): According to Bill Belichick, the Patri*ts aren't even going to bother cheating against the Eagles this Sunday. "Lol, why would we cheat against that team and risk losing more draft picks," pondered Belichick. "We may as well save our cheating ideas for legitimate competition." This line was originally 13. The Patri*ts' announcement that they are not cheating this week moved the line by three whole points.

Colts at Steelers (-7): The Steelers' offense is in high gear, as they have scored at least 30 in their last three games, and have racked up 1594 yards of total offense (531 per game). You don't often hear the Steelers mentioned as a potential Super Bowl contender in the AFC this season, but that is exactly what they are.

Cowboys at Redskins (-4): The Skins have won five straight games at home. Where'd that come from. Meanwhile, in Dallas, even the most delusional fan base in sports has to think this is delusional:

Cowboys do not plan to put Tony Romo on IR. In the event of a long playoff run he could conceivable be available. Keeping door ajar...