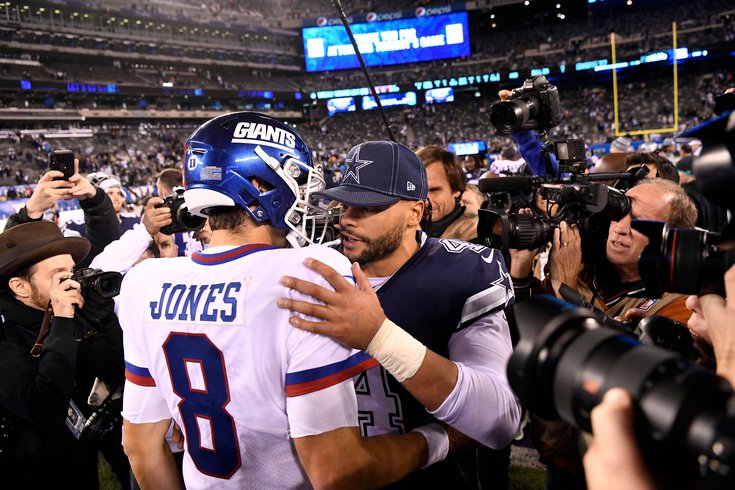 It would be ideal if the Cowboys lost on Sunday, at least if you're still hopeful of any chances that the Eagles can win the NFC East.

In past seasons, Philadelphia Eagles fans generally rooted for their own team, and kept an eye on the rest of the NFC, with a focus on the NFC East. They'll still do that in 2021 (I guess), but there are even more peripheral rooting interests for Birds fans this season because they own 2022 draft picks from other teams.

And so, each week we'll lay out a rooting guide for non-Eagles games on the NFL schedule, and yes, I'm aware that most of the below is obvious. You can also check out the latest Week 5 odds and read all my picks, here. Ideal winners bolded. 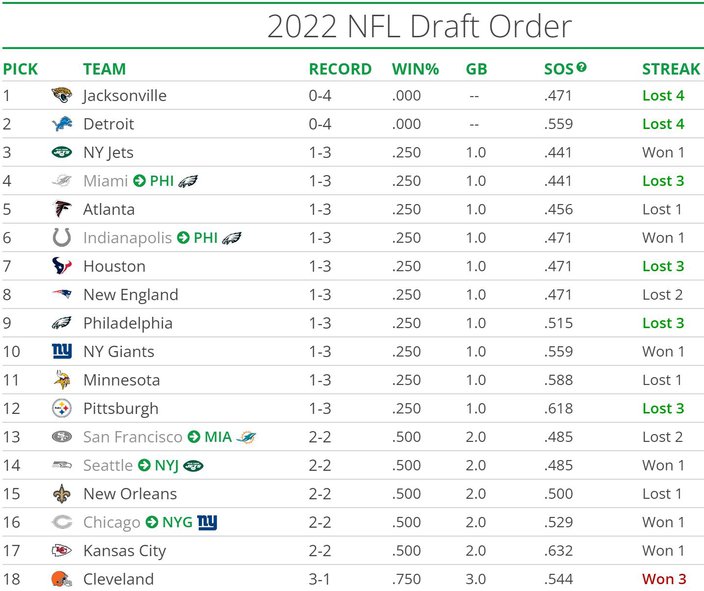 Yep, if the season ended today (it doesn't), the Eagles would have three top-nine picks.

Onto the ideal Week 5 outcomes.

• Saints at Football Team: Is anyone still hopeful that the Eagles can win the NFC East? If so, the ideal outcome here is obvious.

• Dolphins at Buccaneers: The Eagles own the Dolphins' first round pick in the NFL Draft, which as the Tankathon screenshot above shows would be fourth overall if the season ended today. That may wind up being an incredible asset.

• Titans at Jaguars: As you're aware, the Eagles also own the Colts' second-round pick that can become a first-round pick based on playing time benchmarks that Carson Wentz has to hit. The ideal scenario would be for the Colts to stay in the AFC South race throughout the regular season, keeping Wentz from getting benched, but ultimately falling short. The most likely contender to win that crap-ass division is the Titans, who are now 2-2 and a game up on the Colts. Titans losses will be encouraged at some points this season, but for now, it would be nice to see a win against the crisis-mode Jaguars after the Titans lost to the previously winless Jets a week ago.

• Lions at Vikings: The Eagles have an outside chance for the No. 1 overall pick, so the Lions winning some games would be good.

• Patri*ts at Texans: See the Lions explanation above and apply it to the Texans.

• Broncos at Steelers: The Steelers are in line for a high pick as they could have their first losing season in 17 years. It would benefit the Eagles for Pittsburgh to start winning some games.

• Jets at Falcons: Both of these teams are contenders for top five picks. It doesn't matter much which team wins here, but it's worth keeping an eye on for draft positioning purposes.

• Packers at Bengals: The Bengals are the less likely team to make the playoffs in this matchup, so the more games they win, clearing out of the way of the Eagles' potential bounty of first round picks, the better.

• Giants at Cowboys: Again, are you still hoping for that NFC East crown? The Cowboys are 3-1 and looking like an offensive powerhouse, so a loss for them would be preferable. Plus, the Giants can hurt their draft positioning with a win.

• Colts at Ravens: The Colts beat the Dolphins last week, a result that benefited the Eagles. It's ideal if they get back to losing Week 5 against the Ravens, because they probably have some wins against a soft portion of their schedule upcoming.

Browns-Chargers and Bills-Chiefs are a couple of great matchups, but they mean nothing to the Eagles.