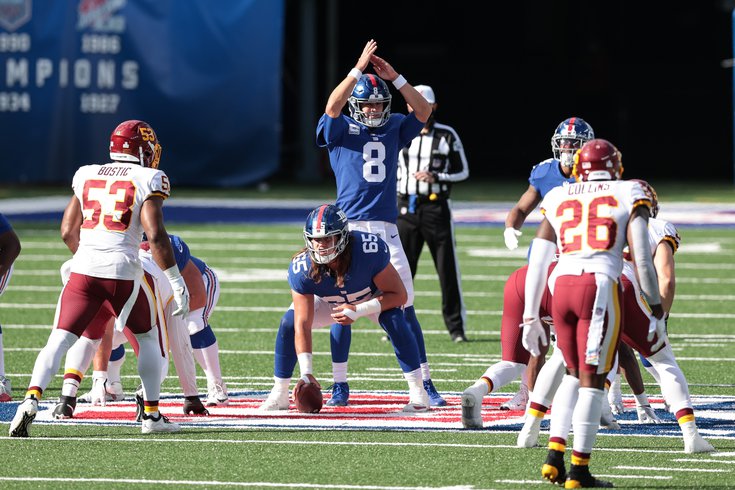 Sadly, we'll probably think of the winner of this Giants - Football Team game as the Eagles' biggest threat to winning the NFC East.

For the gambling enthusiasts, here are my Week 9 NFL picks. To note, the team logos indicate who I think will win the game, not cover the spread. At the end of the picks, I'll note a few teams that I like based on the spread. All the below spreads are courtesy of the consensus Week 9 odds at TheLines.com.

• NFC Championship Game: They lost 37-20, in a game in which that score doesn't even begin to tell the story of how they were dominated. They gave up 285 yards and 4 TDs on the ground, and Jimmy Garoppolo only had to attempt eight passes.

So why are they 7.5-point favorites? Well, the Niners are the most injury-depleted team in the NFL. According to Matt Maiocco of NBC Sports Bay Area, "The 49ers will not have anyone available who touched the ball during their 37-20 victory over the Packers that set them to the Super Bowl." Good Lord.

Just when it was looking like we might get a decent Thursday night matchup for a change... not so much.

Bears at Titans (-6): The Bears have not responded well to the difficult part of their schedule. They have a good defense, but they're average against the run. I like the Titans to eventually wear them down with Derrick Henry, while there's little about the Bears' offense that's worrisome.

Lions at Vikings (-4): In my view, in the NFL expands to a 16-team playoff, the biggest beneficiaries in the NFC would be a trio of NFC North teams that aren't good enough to make the playoffs otherwise, in the Vikings, Lions, and Bears.

Giants at Football Team (-3): The Giants have the worst record in the NFL since the start of the 2017 season. BUT...

But also, the Giants haven't been as bad this season as their 1-7 record would indicate. They've lost three games by three or fewer points, one by four, and one by eight. And hey, their one win this season was against the Football Team. They've at least been competitive.

Ravens (-2.5) at Colts: Some weeks, the Colts look like legitimate contenders. Other weeks, they look like frauds. I have no such concerns about the consistency of the Ravens.

Panthers at Chiefs (-10.5): Here's another double-digit line that's tempting, but I'll pass on this one.

Texans (-6.5) at Jaguars: I didn't write about the Texans poaching Josh McCown from the Eagles' "practice squad," lol, but let's go ahead and update McCown's stops in the NFL (copied and pasted from Wiki):

Raiders at Chargers (-1.5): The Raiders are 3-1 on the road this season, including wins over the best team in the NFL (the Chiefs) and a tough game in some bad weather last Sunday against the Browns in Cleveland. And I get a point and a half? Sold.

Steelers (-13.5) at Cowboys: I thought this line could be around 20 when it was revealed that Andy Dalton would once again be unable to play. Typically, just as a personal preference, I hate laying double-digit points on any NFL game, but this one comes at a value I can't pass up.

This is also an obvious survivor pick this week if you haven't yet used the Steelers.

Dolphins at Cardinals (-4): Around this time last year, the Dolphins were 0-7 with a point differential of -161, and they were clearly the worst team in the NFL. In 2020, Brian Flores is a clear NFL Coach of the Year candidate, as Miami's defense has dominated each of their last three opponents in the Niners, Jets, and Rams. Their turnaround has been impressive.

Meanwhile, Kyle Murray and the Cardinals have scored at least 30 points in each of their last three games, which makes it risky to pick against them, but I'm gonna ride the Dolphins wave for a while longer.

Saints at Buccaneers (-4.5): This is obviously a huge matchup in the two-team NFC South on Sunday Night Football. Personally, I find both Sean Payton and Tom Brady loathsome, which makes rooting for either team based on a pick tough to do, so I'll just stay away.

Instead, let's introduce a new feature! Let's predict which player Cris Collinsworth is going to endlessly ram down our throats all night. They'll be presented by Collinsworth as sort of an "under the radar" player, even though we all already know they're good. I'll go with Lavonte David.

Patri*ts (-7) at Jets: According to ESPN's Football Power Index, here are the percentage odds of the Jets winning each of their last eight games:

In my view, this matchup against the Patri*ts is the Jets' best chance of winning a game. The Patri*ts are a bad football team now, so let's all get used to that, but they should be able to handle the worst team in the NFL.