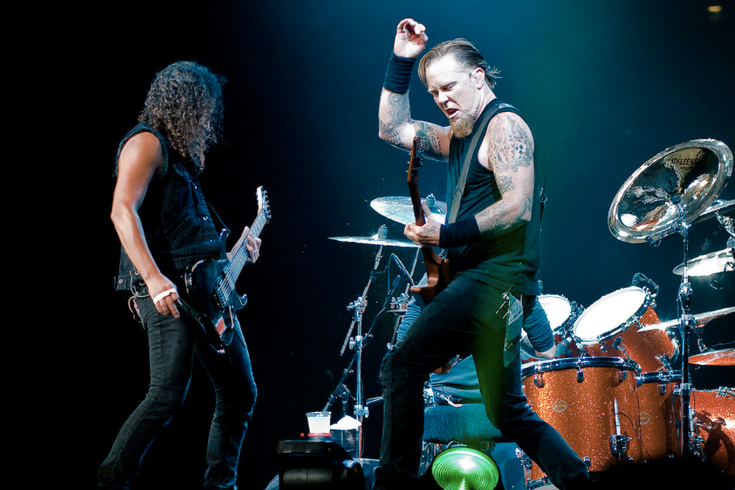 Metallica takes over the Linc on Friday night.

The psychedelic rock of the Australian rock band Pond is all over the place, but they always sounds huge. The group shares an aesthetic, origin story, and some members with the much more celebrated Tame Impala, but Pond is their very own thing. Their latest album, “The Weather,” is the best and most epic in a career chalk-full of meandering experimental rock.

“We really love to get out there and stay out there—it’s in this band’s collective DNA,” the Metallica guitarist Kirk Hammett recently told an interviewer, alluding to the group’s upcoming stadium tour. The band, which has long been almost synonymous with the genre contained in their name, has toured every year for more than three decades. But the crowd favorites are pushing more than fan service, and their latest jaunt is the byproduct of a new double album released last November which found them reinvigorated, sounding more like the band they started out as in the early ‘80s than where they’ve ended up this millennium.

Sheer Mag makes boisterous, soulful rock. The Philly locals have streamlined a grungy but approachable punk sound that fits perfectly with lead singer Christina Halladay’s voice. After sharing a string of wonderful EPs, they bundled up their music in a compilation LP last year called—wait for it—”Compilation LP” that reads like a masterful debut that’s intensely fun to listen to.

A steamy heartthrob from Virginia, the rap-inflected R&B singer Trey Songz has built himself a rabid fanbase. He’s been a sporadic guest on the charts and across radio, but Songz’s live show is particularly legendary. His new music has been a conduit for a protege named Mike Angel, and together they’ll shut down the Electric Factory on Saturday.

Say Anything, the L.A. band that made their splash in the early aughts, are a quintessential emo outfit. Frontman Max Bemis has that endearing, goofy vulnerability that pop-punk stars are so often trying to force. But two decades into their reign, the group are still trying on new sounds, and Bemis is still digging up old stories.

The self-proclaimed weirdo rapper Tech N9ne is a model of indie hip-hop persistence. A faster-than-you-can-hear emcee, Tech has skirted the major label system in favor of a direct-to-fans approach. It's worked out well for him, and he's built a booming brand around himself and his label, Strange Music, which boasts a roster of rappers known for their festival-like tours.