Regional rail service from the suburban county seat to Center City stopped in 1986. SEPTA has doubts about this new plan 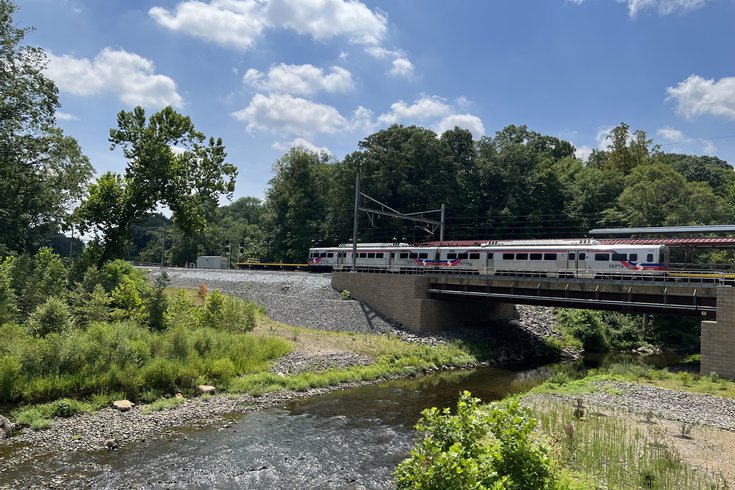 West Chester's proposed shuttle service would use battery-powered trains to take passengers to SEPTA's recently opened Wawa Station in Delaware County, pictured above, enabling riders to get to Philadelphia. West Chester hasn't had direct commuter rail to Center City since 1986.

West Chester's leaders are on board with the possibility of a new light-rail train that would create a shuttle service connecting passengers departing from the borough to SEPTA's Regional Rail line and then to Philadelphia.

While SEPTA says the project is financially infeasible, West Chester Borough Council unanimously passed a resolution supporting a study led by SEPTA and Chester County to determine the train line's viability. the Daily Local News reported Tuesday. Borough officials see the idea as a less-expensive alternative to reviving the borough's commuter train service, which stopped running between West Chester and Center City in 1986.

West Chester is the only county seat among Philadelphia's four suburban collar counties that doesn't have a rail line to Philadelphia, and its closest SEPTA train station is Exton, which is about 6 miles outside the borough. The original train from West Chester to Philly was discontinued due to low ridership, but the growing population of Chester County has led to renewed demand for better public transit options out of West Chester.

A SEPTA official on Tuesday raised doubts about the proposal's chances of happening.

"Service to West Chester is not part of SEPTA’s long-term capital program," spokesperson Andrew Busch said. "The new proposal for battery electric rail cars would require significant investment in track and signals, and SEPTA does not have funding available for this work. In addition, these battery-operated, electric, rail cars are not (Federal Railroad Adminstration) compliant and therefore could not be operated with the SEPTA Regional Rail fleet."

The SEPTA official said the authority is committed to having an ongoing dialogue with the county and the borough, but couldn't immediately confirm any plans for a study.

The plan calls for battery-powered, Class 230 train cars repurposed from the London Underground. Over the last decade, the Pittsburgh-based Railroad Development Corp. has worked with Vivarail in the United Kingdom on converting old train cars into a new kind of passenger train that can be used for projects like the West Chester Metro at a cheaper price point.

Beginning in April 2021, Vivarail sent some of its Class 230 trains to the Rockhill Trolley Museum in Central Pennsylvania to be tested ahead of future leasing opportunities. The so-called "pop-up metro system" trains are the first 100% battery-powered trains in the United States.

"The intention is to lease the trains for use in underutilized lines across the U.S. to pursue 'Pop-Up Metro' routes, offering lower cost, lower risk, faster starts of rail-based transit services in the Americas," Vivarail wrote on its website in April.

The proposal from West Chester calls for two battery-powered trains that initially would be leased for two years. They would operate on the existing SEPTA tracks from West Chester to Glen Mills, with stops at West Chester, West Chester University, Westtown, Cheyney University and Wawa. Together, the two trains could carry 194 passengers.

Prior to passing the West Chester Metro resolution, the borough's council passed another resolution in July allowing its Railroad Restoration Committee to seek outside funding for the project.

A previous PennDOT study in 2018 estimated that using conventional rail to restore a direct commuter line between West Chester and Philly would cost $380 million, a prohibitive figure given the reported $4.6 billion backlog of critical repair projects on SEPTA's to-do list.

West Chester's Railroad Restoration Committee estimates it would take 12 minutes to travel from West Chester to Wawa Station on the proposed light-rail line. The trip to Center City, including the transfer to SEPTA Regional Rail at Wawa Station, is estimated to be 64 minutes.

Taking the SEPTA 104 bus from West Chester and transferring to the Market-Frankford Line to get to Center City takes about 95 minutes.

The shuttle service could serve approximately 1,350 daily riders, according to the Delaware Valley Regional Planning Commission.

The existing SEPTA tracks that the trains would rely on are currently used by the West Chester Heritage Railroad, a tourist train that primarily operates on weekends. It's not yet clear how the shuttle and that train would co-exist.

The Daily Local reported that the estimated start-up costs for the shuttle would be $7.6 million for track restoration, $2.9 million for platform and parking restoration, $1.3 million for a structure to house train operations and maintenance. The two-year lease for the battery-powered trains would be $5 million. The trains would come with proprietary charging infrastructure that Vivarail says can be placed at stations and depots.