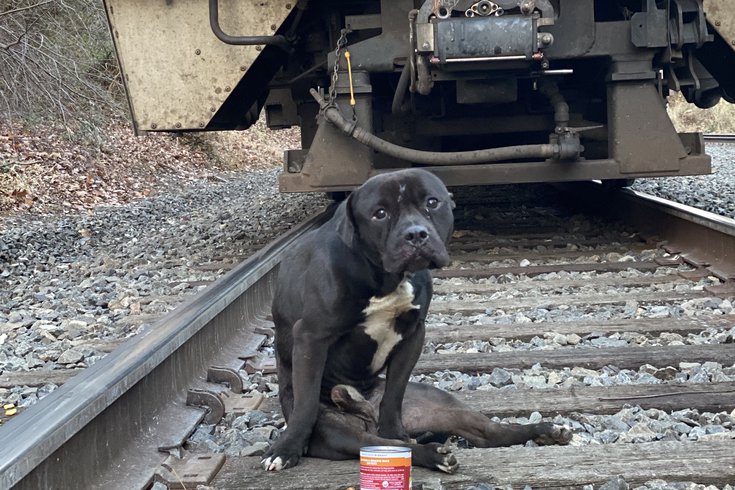 'Lucky,' the abandoned dog found with a severed spinal cord along SEPTA train tracks in Montgomery County last week, underwent his first therapy session Monday, according to Philly Rescue Angels, the organization that saved him.

Lucky, the paralyzed dog found last week on the SEPTA train tracks near Lawndale Station in Montgomery County, underwent his first therapy session Monday and was fitted for a harness, according to Philly Rescue Angels, the nonprofit organization that spearheaded his rescue.

The pitbull mix no longer is in the intensive care unit at the University of Pennsylvania's Ryan Veterinary Hospital, having responded well to injectable pain medications, the organization said.

On Friday, Lucky had received a 6-hour spinal surgery that placed two plates along his spine. The procedure was not intended to repair the dog's severed spinal cord; rather, it was aimed at reducing its pain. There is no chance that Lucky will walk again.

"He is not yet out of the woods, but the vets have stated he is doing well, and is not in any pain at this time," Sidara Son, a member of the Philly Rescue Angels, told PhillyVoice last week.

Lucky's spinal fracture was among the worst the vets at the hospital had ever seen, according to Philly Rescue Angels. His spinal cord no longer connects his brain to his legs, leading vets to believe he was hit by a train at some point during his time on the tracks.

Philly Rescue Angels have received inquiries about adopting Lucky once he's out of the hospital. The dog will require an experienced medical foster home that is willing to dedicate time to help Lucky. He will have to live in a wheelchair and will not be able to go to the bathroom by himself.

The nonprofit organization is seeking assistance covering the costs of Lucky's surgery, which totaled about $15,000, and his ongoing medical care.

"He's going to have a very long road to recovery; the doctor is saying it's going to be about eight weeks or so for him to actually recover, and then he's probably going to have to go to therapy," Son said. "So his ongoing care is going to be expensive ... And, you know, we want to give him a fighting chance, just like he fought to live on the train track. He wants to live."

The Philly Rescue Angels who retrieved Lucky gave the dog his name because he seemingly survived several days along the tracks.

"He would pancake down onto the tracks and the trains would just run over him again and again,"Son said. "So for two days, he was stuck on that train track, with trains just going over him and just fighting to survive. Like it's a miracle he lives ... it's a total miracle."

Son originally heard about Lucky's situation through a Facebook post detailing the dog's presence on the tracks. She immediately jumped in her car and headed to Lawndale Station, where she was escorted by a transit police officer on walk along the tracks. After 15 minutes, they came across the dog.

"He was basically scared but still sweet," Son said. "He was quiet, a little nervous. He couldn't move his back leg. It seemed like he was paralyzed from the waist down and has some damage to the spinal cord."

Son knew she could not risk moving Lucky at that time due to the danger of oncoming trains and the possibility of further damaging his spine, but help soon arrived.

"SEPTA called animal control as soon as the Regional Rail crew saw the dog," SEPTA spokesperson Andrew Busch said. "We stopped trains on the Fox Chase Lines to ensure the dog was safe while awaiting their response."

Once trains were stopped, two animal protection officers from the Animal Care & Control Team of Philadelphia safely transported Lucky to their vehicle. ACCT Philly collaborated with Philly Rescue Angels in the next steps for Lucky's care.

"The rescue had reached out to ask if they could take the dog, and as they were first on scene, we said yes, given that the dog was clearly severely injured and the alternative was taking the dog to a hospital and then the dog being moved to a different hospital," said Sarah Barnett, of ACCT Philly. "Our officers took the dog to Penn for the rescue. We are thankful to Philly Rescue Angels for taking Lucky into their care and we are glad we were able to work together to get the dog to safety. It's heartbreaking what this dog endured."

Rescuers believe Lucky may have been dumped on the tracks after being harmed by someone due to the presence of an unclipped collar and leash found nearby. He then likely was struck by a train, severing his spinal cord. It's difficult to come by conclusive evidence, though, because there are no cameras in the area.

"SEPTA relayed the information from the crews to animal control, but that was fairly limited because we didn’t see anyone put the dog on the tracks or otherwise have information on how it got there," Busch said. "We'll continue to assist in any way possible moving forward."

Now recovering at Ryan Veterinary Hospital, Lucky has become a favorite among the veterinarians.

"He's just really tugging at everyone's heartstrings, and the doctor told me that he's literally her sweetest patient she has right now," said Bridget Deacon, of Philly Rescue Angels.

While many have been working together to ensure Lucky's survival, the pup also has received love on social media from people across the globe looking for ways to help.

"It was a team effort to have the community pull together," Son said. "And I'm really happy that Lucky is getting love from everywhere. I mean, we've had people from the U.K. reach out, praying for him and wishing him the best. It's amazing how the community got together for Lucky."