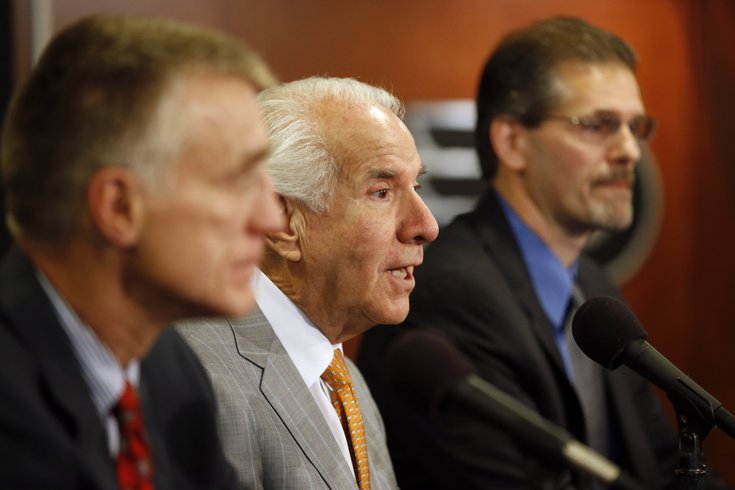 When news came down on Thursday that the estate of late Philadelphia Flyers founder Ed Snider had sold its remaining 24 percent share to Comcast, making them the sole owners of the franchise, the first thought for many Flyers fans was likely, "What does this mean for the players, coaches and, more importantly, the front office?"

According to Sam Carchidi of The Philadelphia Inquirer, the deal, which will be finalized next month and is expected to be approved as soon as this week by the NHL, will not impact personnel.

"We look forward to building on Ed's vision," said Scott, who, according to [chairman and CEO of Comcast Corporation Brian] Roberts, was "handpicked three years ago" by Snider to direct Comcast Spectacor.  [philly.com]

Part of the reason there won't be any big changes is because Snider's passing was not a sudden one, and he had a chance to prepare for the inevitable transition of power. And now it appears the man with final say on potentially franchise-changing decisions will be the one Snider felt best suited to carry on this part of his legacy: Dave Scott.

If that scares some Flyers fans out there, it probably shouldn't. It appears that he's been calling the shots for some time now, and plans to rely on the front office that Snider put in place prior to the onset of his illness.

Scott will work closely with Holmgren and Hextall - as he has done since Snider became extremely ill a year ago - and will be the person responsible for signing off on major decisions, such as signing a free agent.

"Dave will be the last word," Roberts said. "My personal belief is you trust your leaders, you empower them, and they make the best decisions they can make."

Roberts added that Scott will "rely on the experts" in the Flyers' front office. "We're very confident this will work well. This is what Ed wanted. That's the most important message. He wanted us to own 100 percent, and he wanted a smooth transition."  [philly.com]

Roberts also told Carchidi that Snider, whose family released a statement on Thursday saying they were "delighted," had been planning on eventually selling his shares to Comcast long before he ever became ill.

With the sale, Comcast will also take over sole ownership off the Wells Fargo Center.

Scott said the 20-year mortgage on the Wells Fargo Center was recently paid off.

"In all the 20 years, Comcast Spectacor has never been in better financial shape than it is right now," Roberts said. ". . . And when you put all that together, it's allowed the focus to be, 'Let's try to win the Stanley Cup in Ed's memory and make him proud.'"  [philly.com]

Stay tuned as we'll have more as it develops...

[Make sure to check out Sam's in-depth story, here.]