The adventures of wearing my underwear to the beach 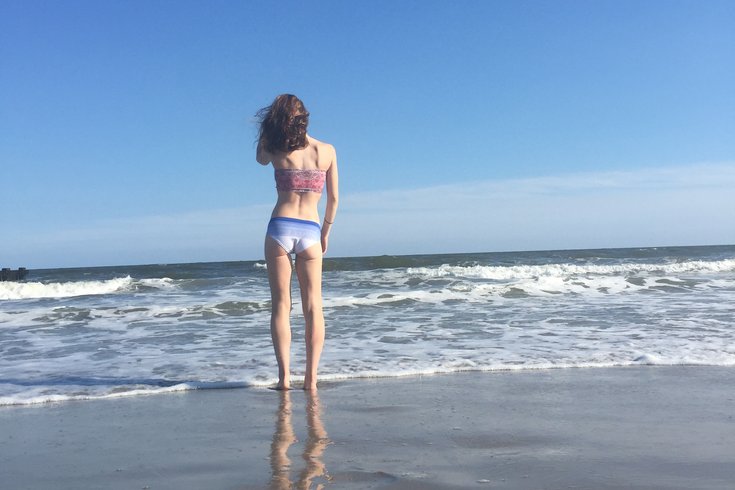 Elizabeth Licorish on the beach in her underwear.

After a summer spent battling health issues and struggling to keep up with work and social obligations, I finally squeezed in an afternoon at the Jersey Shore.

At 3:30 p.m., on the last day of August, my friend Chris and I packed a few towels and hit the road. I forgot my bathing suit.

Since denim cutoffs and a wrinkled cotton T-shirt aren’t the most comfortable beach attire and since I’d already been through hell this summer and couldn’t care less what my fellow beach dwellers thought of me, I decided to sunbathe in my underwear.

And so, while my day didn’t end in a dramatic display of feminist activism, it did teach me an important lesson. In pragmatism, in confidence, and in solidarity.

Chris was slightly scandalized by the idea.

“Are you sure you want to do this?” he whispered, like anyone could hear us over the roar of the ocean.

I wasn’t at the beach to parade my body, so I wasn’t terribly self-conscious. I just wanted to feel the sun on my skin.

Still, I will admit, it was a little weird stripping down to my skivvies in broad daylight, even though there is very little distinction between a pair of underwear and a pair of bikini bottoms. They constitute the same shape. They’re stitched from similar lightweight fabric. But they’re marketed differently; they’re sold in separate clothing departments. And they play different roles in mainstream society’s dress code: One is deemed “appropriate” beach attire, and the other is not.

What women should be permitted to wear at the beach is a hot-button issue today, in the wake of the (brief) French burkini ban that prohibited women from covering up. As I lay in the sand, wearing only a bandeau bra and striped underpants, I considered the potential consequences of violating society’s dress code at the other end of the spectrum. For many, enjoying the surf and sand in your underwear is too risqué, not because it shows more skin, but because of the cultural significance we attach to certain items of clothing.

A few teenage girls pointed and giggled at me as they packed up their lounge chairs and shuffled off for the day, but hardly anyone else seemed to notice or care about my slightly unconventional look. I thought maybe a mother or two might scold me for dressing too provocatively around their children, but they were too busy chasing after toddlers in diapers to pay any attention to me.

Then I recalled the recent image of French police forcing a woman to remove her burkini because others found it offensive, intimidating or otherwise inappropriate. The image is haunting. It should make us think about what it means to be a woman, enjoying a day at the beach, no matter where she’s from or what she’s wearing.

People all over the world celebrate fashion as a means of self-expression. The problem is many of us believe that women, especially, always want to communicate through their clothes. That they wish to elicit every stranger’s response.

We accept what we perceive to be a woman’s fashion statement so long as it sticks to the script. At the beach, we expect a woman’s choice of clothing to say, “I bought this bikini for public consumption. I hope you approve.” We don’t care if a woman is comfortable if she makes us uncomfortable. In fact, a woman’s pursuit of comfort is, in itself, offensive, because it suggests she prioritizes herself over everyone else.

Because we’re so attuned to reading women’s clothing for messages directed at us, we react. Because we see fashion as an invitation, we’re compelled to add our own two cents. We assume women wearing burkinis want to instigate a religious debate, just like we imagine women sunbathing in their underwear are trying to titillate.

Unlike the woman wearing a burkini on the French beach, no one harassed me.

But, just as I was beginning to completely relax and shrug off the idea of wearing my underwear in public as no big deal, I heard Chris catch his breath and whisper (he was still a little uncomfortable), “Hurry, put your shorts back on.”

I sat up and looked around. Two policemen had descended onto the sand.

Chris and I both drew the same conclusion: They must be here for me.

I momentarily considered putting my shorts (and shirt) back on. I didn’t want to go to jail. I didn’t want to cause a scene. I didn’t want to lose what remained of my single beach trip of 2016. But I didn’t budge. Instead, I lay motionless, ready to stand up for every woman’s right to wear whatever she damn well pleases.

As it turns out, the police had been called to remove an unleashed golden retriever, not a rebellious woman, from the beach. And so, while my day didn’t end in a dramatic display of feminist activism, it did teach me an important lesson. In pragmatism, in confidence and in solidarity.