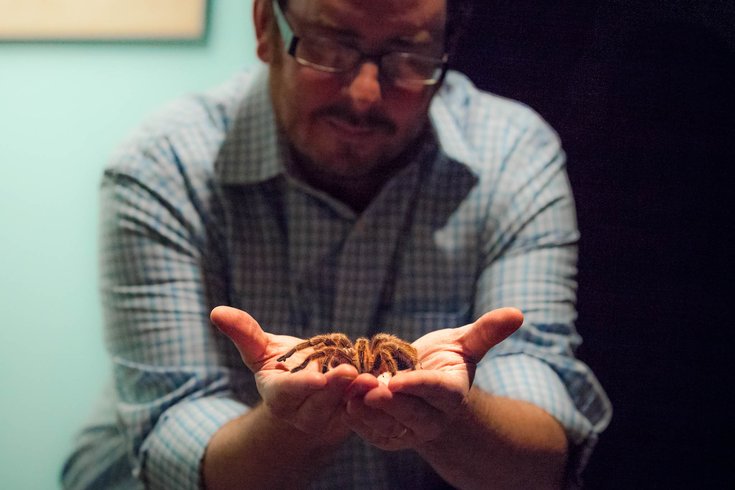 When an invertebrates specialist places a Rose Hair tarantula into your hands, the first thing you notice is how velvety delicate it is. Then, if you’re anything like I was at the Academy of Natural Sciences of Drexel University, you forget all about killer-spider fears you once harbored thanks to old episodes of "The Brady Bunch."

In advance of Saturday’s “Tarantulas: Alive and Up Close Exhibit” opening, the Academy hosted a media preview on Thursday morning.

Also on hand for the event hyping a chance to “come face-to-face with nearly 20 species of live tarantulas – fangs and all” was a fourth-grade class from the nearby Russell Byers Charter School and 5-year-old Victoria Spalding who traveled from Pennsville, New Jersey, with her mother.

“What does she like for breakfast?” asked Victoria, who then learned that tarantulas don’t eat meals in the same fashion as humans like her.

“If she eats a small mouse,” Verderame said, “she’d be good for the month.” 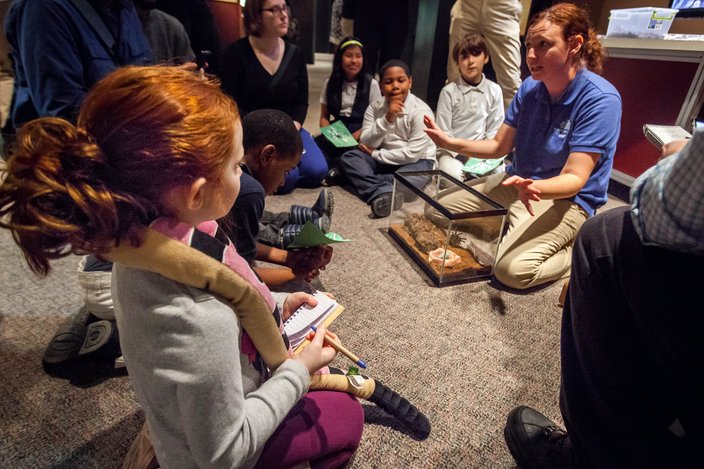 Victoria Spalding of South Jersey, left, takes notes and prepares a question for Karen Verterame, Invertebrate Specialist at the Academy of Natural Sciences about 'Danielle' the Curly Hair tarantula in the terrarium.

Granted, Verderame wasn’t keen on letting too many people hold the tarantulas, out of fear for both human and spider safety. (Full disclosure: I wouldn’t have wanted to hold the Goliath bird-eating tarantula in the first place).


But, the exhibit – which runs through May 30 at the Academy – will afford visitors the chance to get up close and personal with spiders with the reputation of being “terrifying, fast, hairy and scary.”

At 11:45 a.m. each weekend day, visitors can see the tarantulas out of their enclosures, with a “tarantula keeper” discussing its features and fielding questions like Victoria’s. The space is also filled with exhibitions designed to “present these eight-legged giants of the spider world in a new light.”

“This exhibit will be an eye-opener for everyone who has ever loathed or loved spiders,” said Jennifer Sontchi, exhibits director for the Academy.

On Thursday, Verderame spoke about reasons for tarantula fear – some breeds are “very fast, very aggressive and are solitary creatures; if I take two out at the same time, you’ll be left with one.”

Indy – the tarantula that she let me hold after the crowd dispersed – was not one of those, though. Thankfully.

“It feels exactly like velvet,” she said, accurately, noting that the exhibit won’t be as hands-on as Thursday’s experience since people don’t know they’re allergic to these creatures until they touch them. In extreme cases, people with bee allergies could have a reaction for which an EpiPen would be needed.

“We don’t want to take that chance,” she said of subjecting humans to allergies and spiders to potential injury or death if dropped by those unaccustomed to holding them. “They’re not considered deadly, but a bite would hurt.”

As for people’s inherent fears of spiders like those on display at the Academy, Verderame wasn’t really feeling it as she let Indy sit in my hands for a few minutes. (Full disclosure: I was worried for a little while that any itch was an allergic reaction but, six hours later, those paranoid fears subsided.)

“There are some dangerous caterpillars out there,” she said. “People who are scared of spiders should be more scared of those.”

“Tarantulas: Alive and Up Close” opens at the Academy of Natural Sciences (1900 Ben Franklin Parkway) on Saturday and runs through May 30. For more information, visit ansp.org.