What Jim Schwartz values in his cornerbacks is becoming clear 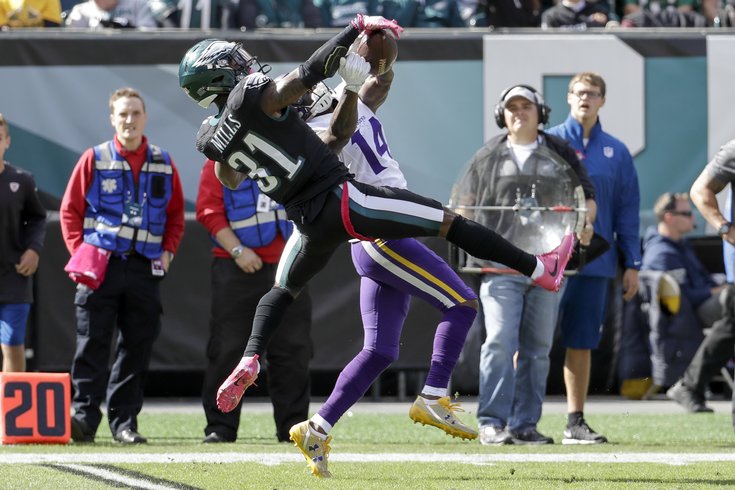 Jalen Mills exudes confidence, which has won over Jim Schwartz.

When the Eagles drafted Eric Rowe in the second round of the 2015 NFL Draft, they were getting a big 6'1, 205-pound corner who ran a 4.45 40 and had a 39" vertical leap. He was an outstanding example of the height-weight-speed parameters the Eagles valued under Chip Kelly.

Rowe has talent, and showed enough promise his rookie season that most assumed that he would be a shoe-in at starter in 2016 after the conclusion of the 2015 season. For example, he had an outstanding game against the Patriots last season. After watching the tape of that game, by my count, Tom Brady targeted Rowe 13 times. He was 4 of 13 for 37 yards, 0 TDs, and an almost interception. That would be a passer rating of 40.2.

In 2016 under Jim Schwartz, throughout OTAs, minicamp, and training camp, Rowe went from playing with the first team offense, to second team, to playing in the fourth quarter against third- and fourth-team offenses in preseason games. While it's been cited that Rowe may not have picked up the defensive scheme under Schwartz, his falling out of favor and eventual trade to the Patriots was most likely a result of Rowe's competitiveness and lack of confidence.

After the Eagles' fourth preseason game this season against the Jets, Rowe was asked if he thought he would make the team. He not only wasn't sure, but didn't seem to think it was an unthinkable proposition.

Confidence and competitiveness, it would seem, are huge selling points for Schwartz, who was asked how the Eagles have been able to stay afloat defensively despite a number of injuries at the corner position.

"I think the competitiveness of our corners, regardless of experience, has shown, and the safeties have been able to do a good job communicating, and in most circumstances do a good job of baling those guys out when they have given up a play," he said.

Asked later about how rookie Jalen Mills has progressed as a player, Schwartz spoke in glowing terms about Mills' competitiveness.

"From the time he's come here, there haven't been very many situations that have been too big for him, including this last game," said Schwartz. "If you were watching, we actually flipped sides with him for Julio Jones. I don't want to talk about May, but if you told me in May we'd take a seventh-round draft pick and be flipping sides with Julio Jones, but some of it had to do with Jalen, some of it had to do with where the health of our other corners were.

"But I'll go back, and Jalen -- when I talked about the competitiveness of our corners, in large part I was talking about Jalen. And when we were trying to manage our injury position at corner and at halftime we decided that we wanted to get him on, there was no hesitation. There was no, ‘Well, I don't know, that guy is really good,’ or 'What coverages are you going to call?' It was, ‘I've got him.’ Like I said, he didn't always make the play, but that's not what this league is about. You can't pitch a shutout to every wide receiver, particularly a guy like that, that is, if not the best, one of the best, wide receivers in the NFL with a hot quarterback.

"But he was able to -- his competitiveness carried that."

When asked why Schwartz has a history of success with later-round corners, and what he is looking for that "transcends the round that they get drafted," Schwartz brought it right back to... (drum roll)... competitiveness.

"Yeah, I think if we thought they were really good, we would have drafted them earlier," he joked. "You don't want to take too much credit for that. If you draft them in the first round, they're good, okay, good. Second round -- when you're drafted late in the draft, you're drafting traits. I'd rather not talk too much about those, but one of those is competitiveness, competitiveness not just as a -- what you would think, a guy that wants to win or a guy that's interested in playing, but competitiveness at the ball, a guy that can go and defend and isn't afraid to be on an island.

"I think if you went across, whether you were drafted in the first round, the seventh round, a free agent, fifth round, [like Seahawks CB Richard] Sherman, those guys all possess that. Sherman is an incredible competitor. He's out there. He wants to defend every pass. That shows. You don't need to be a scouting genius to see that. He's very competitive at the ball, and I think all good corners are that way."

Mills isn't as big or as fast as Rowe, but Schwartz trusted him to man up mano-e-mano a week ago against the best wide receiver on the planet. Conversely, Rowe was shipped to Boston for a fourth-round pick.

The Eagles are nearly certain to address the corner position this offseason. While size and speed will, of course, be important attributes, you can be sure the Eagles will be targeting competitive corners with high levels of confidence.