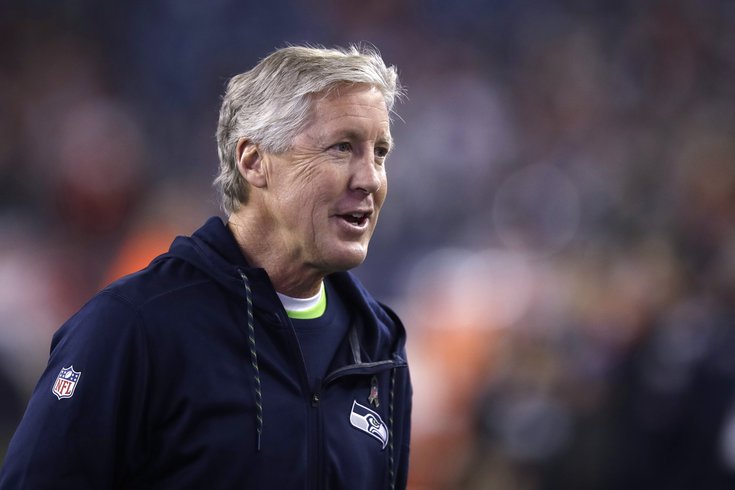 "Lol," said Carroll after getting off the phone with Philadelphia reporters. "They asked me if the Eagles' defense is as good as ours." Probably.

One of the things that the 2016 Philadelphia Eagles have proven so far this season is that their defense is legit, and is capable of shutting down some of the best offenses in the NFL.

The 2015 Pittsburgh Steelers were as explosive as any team in the NFL, gaining 6.3 yards per play, best in the league. In 2016, heading into their game last Sunday with the Eagles, the Atlanta Falcons were the top-ranked offense in the NFL, gaining 6.8 yards per play, which again, was best in the league. The Eagles faced both teams so far this season and held them to a combined 18 points.

This week, the Eagles will face a team that has easily had the best defense in the NFL over the last half-decade, which begged the question from Philly reporters on Wednesday, "Is the Eagles' defense on the same level as the Seahawks'?"

"I think so, if you look at the numbers," said Doug Pederson, who of course runs the offense and leaves defensive responsibilities to defensive coordinator Jim Schwartz. "It's one of top defenses in the National Football League. Not giving up many points. Yeah, it should. We should be mentioned. Sometimes you get overshadowed a lot by how your offense is performing. But that has, by no means, overshadowed anything that our defense has done in the first nine weeks."

"Yeah, they're probably ranked higher than we are," said Carroll. "This is a really good group. It starts up front with these guys. They're very aggressive. Coach Schwartz has got these guys humming off the football. They vary their stuff. They mix their coverages. It's a really nice group."

A quick look at the numbers this season:

While the Eagles' defense has indeed played well this season, it feels a little absurd to put them on the same level as the Seahawks. Here are the Seahawks' defensive rankings vs. the Eagles over the last four years, in terms of yards and points:

"Lol," said Carroll after getting off the phone with Philadelphia reporters. "They asked me if the Eagles' defense is as good as ours." Probably.

Of course, the Eagles' defensive numbers were skewed drastically as a result Chip Kelly's fast-paced offense, which forced the Eagles' defense to play more snaps than any team in the league. But clearly, the Seahawks have proven over a much longer period of time that they are an outstanding defense. In a small sample size, the Eagles' defense has been very good in 2016, but they have a looooong way to go before they should reasonably be mentioned in the same breath as the Seahawks'.