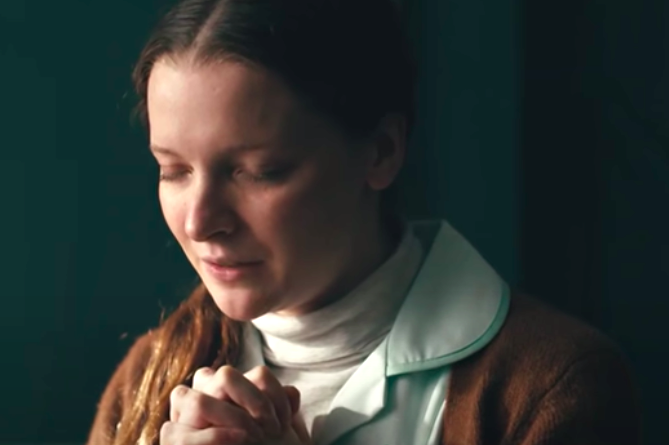 The highly-anticipated new psychological horror from A24, 'Saint Maud,' is coming to Hulu in May, along with a new batch of movies and television shows.

The highly-anticipated psychological horror "Saint Maud" is finally being released to major streaming services next month, along with a new batch of titles coming to Hulu in May.

"Saint Maud" follows a nurse named Maud (Morfydd Clark) who converts to Catholicism after experiencing an obscure trauma while working in a hospital. After moving to the private sector, Maud begins to care for Amanda (Jennifer Ehle), in the patient's own home.

From there, the story begins to twist, as Maud becomes increasingly obsessed with her newfound religion and believes her patient's soul needs saving.

The movie was purchased by the A24 film company — known for working with horror-movie director Ari Aster on summer box office hits like "Midsommar" and "Hereditary" — after "Saint Maud" premiered at the Toronto film festival in 2019.

A24 planned to release the movie in 2020, but the pandemic got in the way. "Saint Maud" eventually premiered in theaters in the United Kingdom, where the film is set, in October 2020. The movie is also the feature film debut of British director Rose Glass.

"Saint Maud" arrives on both Hulu and Amazon Prime on May 13. It is currently available on the cable service EPIX.

Along with "Saint Maud," other anticipated Hulu titles for May include Marvel's new animated television series "M.O.D.O.K," featuring the voice of actor Patton Oswalt. The final season of Aidy Bryant's comedy series "Shrill" will also be added to the streaming platform.

A handful of movies including "Almost Famous," and "Reservoir Dogs" will be available on the platform May 1, but both will leave by the end of the month.

Plenty of shows and movies are saying goodbye to Hulu as well, such as "Gone Girl," "Deadpool," "Four Weddings and a Funeral" and more. You can find the list of those below, along with everything that's arriving on the service next month.

Here are all the movies and shows coming to Hulu in May 2021:

Here are the movies and shows leaving Hulu in May: