Where are the Eagles deep, and not so deep, after the 2019 NFL Draft: Defense edition 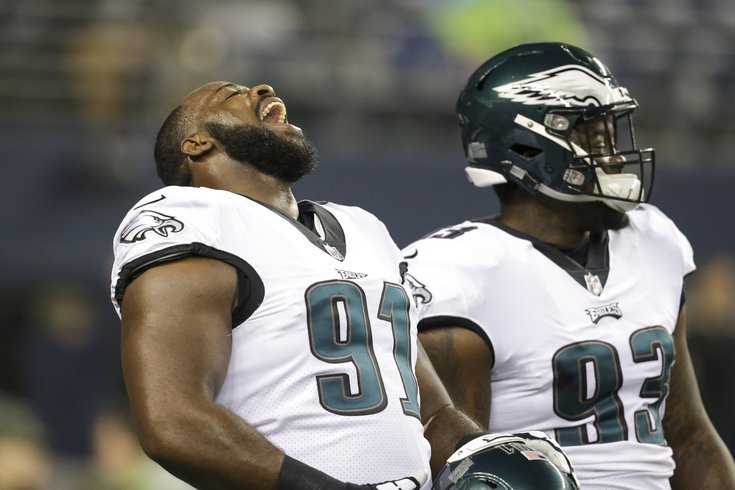 Fletcher Cox will be re-joined once again by his friend Timmy.

While Howie Roseman has promised that the Philadelphia Eagles aren't done adding to their roster, it is still probably somewhere around 90-to-95 percent set. Here we'll take a look at each of their positions, and determine where they are strong, and where they still need help. We started with the offense on Sunday. Today we'll finish up with the defense.

*To note, we are (mostly) not factoring in unofficial undrafted free agent acquisitions.

Going from Bennett to Curry is a downgrade, and there's no obvious "feel-good about it" candidate to take over Long's role if indeed he's gone.

In Jim Schwartz's heavy DL-rotation scheme, it is imperative that the front four is able to get to the quarterback without the aid of blitzers. The Eagles will still be able to do that when Graham and Barnett are in the game, but the combination of Curry and someone from the "maybe they show something" group could be a significant liability when they go in for their line shifts. If Graham or Barnett go down, the Eagles' pass rush could be in serious trouble.

• Did the Eagles' depth get better or worse this offseason? Worse, clearly, as shown above. We'll reevaluate if they add a guy, like, saaayyy, Ezekiel Ansah.

• Are the Eagles in good shape here relative to the rest of the league? Meh. Graham is still somewhat under-appreciated, and I believe that Barnett is underrated, as he was off to a very good start of the season in 2018 before he got hurt, but there are no stars here and the depth is currently a legitimate concern.

The foursome of Fletcher Cox, Malik Jackson, Timmy Jernigan (assuming his back has healed), and Treyvon Hester is a very, very good group. A season ago, Cox was forced to play more than he probably should. In 2019, better depth will allow him to get more breaks and stay fresh.

• Are the Eagles in good shape here relative to the rest of the league? Top five interior defensive line group, in my view.

The Eagles lost Jordan Hicks this offseason, but they added Zach Brown and L.J. Fort in free agency. Brown will likely start alongside Nigel Bradham, with Kamu Grugier-Hill retaining his familiar role as the third linebacker.

Fort, Nate Gerry, and Paul Worrilow serve as decent enough depth, and all three will be expected to contribute on special teams, if they make the roster.

We'll also make the rare exception of noting T.J. Edwards, who is not officially on the roster yet, but was reportedly signed as an undrafted free agent. He was projected Day 3 pick by most draft analysts, and will have an opportunity to make the team.

• Did the Eagles' depth get better or worse this offseason? In my view, Hicks is both a better player and better fit for the defense than Brown, but there's something to be said for players who can actually stay on the field. We'll call it a push.

• Are the Eagles in good shape here relative to the rest of the league? No, but linebacker is also easily the least important position in the Eagles' defensive scheme.

Cornerback: No star players by any stretch, but they're young and quite deep

Leading up to the draft, experts had the Eagles drafting a cornerback in the first round, which really never made any sense at all. While they don't have any star players by any stretch, the Eagles are loaded with young corners, many of whom have yet to realize their full potential.

• Ronald Darby (25), $2,825,000, was a surprise re-signing by the team this offseason, but he is perhaps the most gifted athletically of group. Tackling must improve.

• Sidney Jones (23 later this month), $1,674,564, was OK before he start having hamstring issues, but he wasn't the same thereafter. He has to prove he can stay on the field, but he has at least shown flashes of talent.

• Avonte Maddox (23), $726,478, had an outstanding rookie season, playing outside corner, slot corner, and safety, often times at a high level.

• Rasul Douglas (25 in August), $846,572, had a bad start to the season when he was forced to play due to injuries, but he rebounded and played very good football down the stretch.

• And finally, there's Cre'Von LeBlanc (24), $720,000, who the team added during the season last season, who turned out to be one of the pleasant surprises for the 2018 Eagles, filling in at the slot corner spot.

• Did the Eagles' depth get better or worse this offseason? Neither, however, they can feel better about a few of their corners than they did this time a year ago. It's also extremely unlikely that they suffer the same level of injury carnage at corner that they did in 2018.

• Are the Eagles in good shape here relative to the rest of the league? It's a unique situation because again, they don't have any star players at corner, however, I don't think they'd trade this group -- factoring in age and cost -- with many other teams' corner groupings.

Malcolm Jenkins will return as one of the best safeties in the NFL, but he is entering his 11th season. Opposite Jenkins is Rodney McLeod, who is coming off an ACL tear. There's little reason to believe Jenkins' game will suddenly fall off, but McLeod may not be the same in 2019.

Backing them up will be Andrew Sendejo (to be determined if he'll be a comp pick casualty), Blake Countess, Tre' Sullivan, Deiondre' Hall, and Godwin Igwebuike. And of course, if they need Maddox to fill in at safety, he showed in 2018 that he is more than capable.

• Others: Draftable UDFA Delvon Randall will reportedly join the Eagles as well.

• Did the Eagles' depth get better or worse this offseason? Worse. McLeod was healthy last year. This year, we'll see.

• Are the Eagles in good shape here relative to the rest of the league? Yes. There are some terrible safety tandems out there. The Eagles have one of the better ones, assuming McLeod doesn't experience some sort of drastic decline because of his injury.