Where are the Eagles deep, and not so deep, after the 2019 NFL Draft: Offense edition 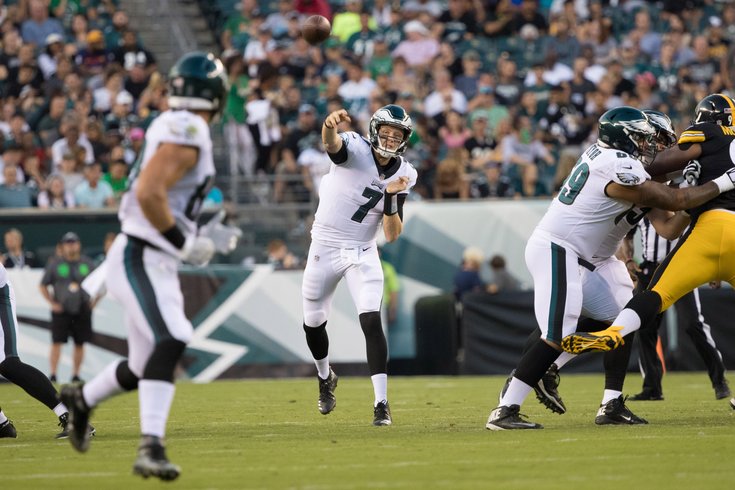 Nate Sudfeld will take over for Nick Foles as Carson Wentz's new No. 2.

While Howie Roseman has promised that the Philadelphia Eagles aren't done adding to their roster, it is still probably somewhere around 90-to-95 percent set. Here we'll take a look at each of their positions, and determine where they are strong, and where they still need help, starting with the offense.

*To note, we are (mostly) not factoring in unofficial undrafted free agent acquisitions.

Quarterback: Depends on what you think of Nate Sudfeld, obviously

Carson Wentz is a top-five quarterback talent in the NFL, but he'll have to prove that he can stay healthy after being unable to finish each of the last two seasons with major injuries.

The Eagles lost the best backup quarterback in the NFL this offseason, as Nick Foles headed south to be the Jacksonville Jaguars' new starter. Taking his place will be Nate Sudfeld, who has been developing behind the scenes for two seasons, as he was the No. 3 quarterback in 2017 and 2018. In my view, Sudfeld is ready to come out of the oven, and be the No. 2. He displayed legitimate skills during training camp, and was impressive during the preseason. He even threw a TD pass against his old team during the regular season.

Behind Sudfeld will be Clayton Thorson, the Eagles' fifth-round pick in the 2019 draft. Thorson will develop behind the scenes in 2019, like Sudfeld has for the last two seasons.

• Others: The Eagles also signed Luis Perez, who played for the Birmingham Iron in the short-lived AAF.

• Did the Eagles' depth get better or worse this offseason? Worse.

• Are the Eagles in good shape here relative to the rest of the league? Yes, Wentz is a supreme talent when healthy, and I'd gladly take Sudfeld over most of the backup dreck around the league.

Running back: Some new faces, but...

During the 2019 offseason, the Eagles made two significant running back acquisitions. They traded a Day 3 pick in 2020 for the Bears' Jordan Howard, and then spent a second-round pick in the 2019 draft on Miles Sanders. Howard, Sanders, Corey Clement (assuming he's healthy), and Wendell Smallwood should give the Eagles a solid rotation at running back. To be determined if the Eagles bring Doug Pederson favorite Darren Sproles back for one last season, if for no other reason than that they don't currently have a "tried and true" punt returner.

In theory, the Eagles are less likely to need to dive deep into their depth at running back this season than they were in 2018. Howard has never missed an NFL game due to injury, and Sanders is fresh, as he had just 276 career carries in college.

• Are the Eagles in good shape here relative to the rest of the league? While improved, they're still clearly in the bottom half of the league at running back.

Wide receiver: Deepest it's been in a long time

After fielding perhaps the worst wide receiver corps in the NFL in Carson Wentz's rookie season in 2016, the Eagles have since provided their young quarterback with one of the best, at least on paper.

Alshon Jeffery, DeSean Jackson, and Nelson Agholor provide an intriguing and diversified set of skills to the offense.

The Eagles also spent a significant resource on the position in the draft, taking J.J. Arcega-Whiteside in the second round. Arcega-Whiteside is similar to Jeffery in that he's a bigger contested catch guy who should help in the red zone. And then there's Mack Hollins, who is sort of the forgotten man. Hollins missed the entirety of the 2018 season with a sports hernia injury (and maybe more?). He's a bigger receiver, but with a different skill set from Arcega-Whiteside, in that he's a speed guy with some YAC ability. He'll contribute on special teams, and maybe Pederson will try to sprinkle him in on occasion in the regular offense.

• Are the Eagles in good shape here relative to the rest of the league? Yes. Easily top 10, possibly top 5.

Zach Ertz and Dallas Goedert are the best 1-2 tight end combination in the NFL, period. Ertz broke the NFL single-season tight end record for most receptions in a season, with 116. Meanwhile, it was pretty obvious way back in 2018 training camp that Goedert could play, and while his numbers (33-334-4) certainly weren't eye-popping because he didn't play as much as he should have, Goedert proved in his rookie season that he can get open and catch the football. However, the true pleasant surprise about Goedert's rookie season was his ability as a blocker, something he was not asked to do much of as the No. 1 passing game target at little South Dakota State.

There were no obvious holes in Goedert's game, a rare thing to say about a rookie tight end, and he would already easily be a top half of the league starter on a team that didn't also employ Ertz. By the end of the season last year, Goedert was playing around 60 percent of the snaps. I believe that's the sweet spot for him to begin the 2019 season.

This offseason, the Eagles also brought back Richard Rodgers, who had a very good training camp and preseason, but was lost for most of the season with a knee injury.

• Others: Josh Perkins, Will Tye.

• Did the Eagles' depth get better or worse this offseason? Same.

• Are the Eagles in good shape here relative to the rest of the league? It's the best tight end group in the NFL.

In 2017, Lane Johnson and Jason Peters were by far and away the best OT pairing in the NFL before Peters got hurt. Peters' game fell off a bit in 2018, and while he started all 18 of the Eagles' games in 2018, he struggled to stay in them. Still, there's a strong argument to be made that Johnson and Peters remain the best OT pairing in the NFL heading into 2019. To be determined if Peters' game improves in 2019, being an extra year removed from his torn ACL, or if his age finally causes him to drop off substantially.

Behind Peters and Johnson are a couple of guys who would be projected to start on plenty of other teams around the league in first-round pick Andre Dillard and fourth-year swing tackle Halapoulivaati Vaitai. Dillard is a stud prospect best known for his ability in pass protection, while Vaitai is an experienced tackle with left-right versatility who has appeared in 39 games in 3 seasons, starting 17, including Super Bowl LII.

Then there's Jordan Mailata, whose growth from the first day of training camp to the final preseason game was unlike anything I've ever seen in the NFL. He is a size-athleticism freak of nature with a high ceiling, but obviously, he is such an unpredictable study, seeing as the Eagles' first preseason game eight months ago was his first game, ever.

And finally, the team also likes second-year pro Matt Pryor, who they have been cross-training at RG and RT ever since they drafted him in the sixth round in 2018.

• Are the Eagles in good shape here relative to the rest of the league? Deepest OT group in the NFL. It will be a challenge fitting them all on the roster, frankly.

The Eagles' interior offensive line starters include the best center in the NFL in Jason Kelce, a RG coming off two consecutive Pro Bowls in Brandon Brooks, and LG Isaac Seumalo, who was solid enough in 2018, with the potential to take a step forward in 2019.

Of course, Brooks may not be ready to start when the season begins, as he is still recovering from a torn Achilles suffered in the Eagles' playoff loss to the Saints. Additionally, the Eagles declined to pick up a $3,708,334 option on Stefen Wisniewski, making him a free agent, though he remained unsigned.

Depth is lacking on the interior of the Eagles' offensive line. As noted above, Pryor is being cross-trained at RG and RT. Beyond him, there are no interior linemen currently on the Eagles' roster who finished the 2019 season on a 53-man roster.

The Eagles did (unofficially) add a slew of interior offensive line prospects as undrafted free agents, who will have a chance to stick, but there's a very good bet the Eagles will try to add a veteran.

• Did the Eagles' depth get better or worse this offseason? Worse

• Are the Eagles in good shape here relative to the rest of the league? That's tough to say. The Eagles clearly need depth, however, many NFL teams struggle to even field three legitimate interior OL starters.