Where to hit the rapids near Philly

For those who want a more thrilling boating experience 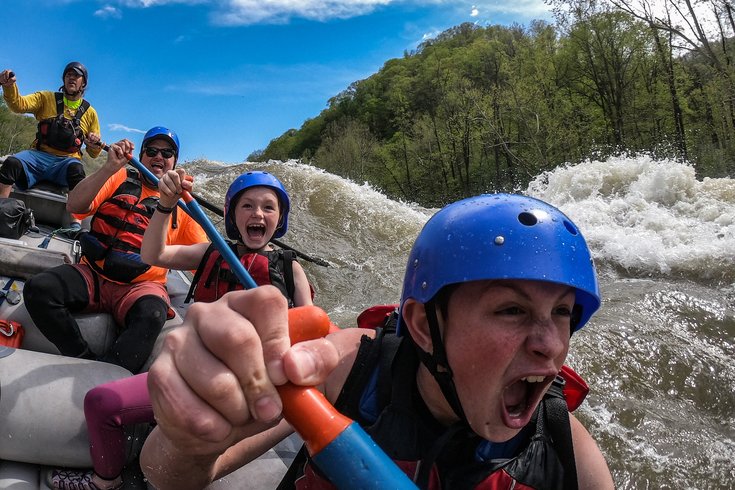 Some of the best white water rafting can be found within driving distance of Philadelphia.

Want to experience boating that's a bit more intense than what the Jersey shore can offer?

Some of the best whitewater rafting east of Colorado can be experienced within driving distance of Philadelphia, just a few miles from Fayetteville, West Virginia.

And for those who would rather not get wet, there's also an array of zip lines.

Here's what you need to know:

Where To Start With Whitewater: It all depends on what you're comfortable with and your age.

For adrenaline junkies, there is the Upper Gauley river,  which is as intense as game 7 of an NHL playoff game. All excursions with any reputable whitewater company includes a guide. However, you must be able to execute the technical runs with your raft mates on the Gauley, which has a minimum age of 16. Becoming a "swimmer," river parlance for man overboard, is possible, particularly around Pillow Rock a treacherous rapid. There's a reason photographers and videographers camp out at Pillow Rock.

The Upper Gauley isn't insurmountable. It's just the most challenging whitewater you'll experience on the Eastern half of the United States. The Lower Gauley isn't as intense.  There are serene breaks between Class V rapids.

The Upper New River is perfect for families. The minimum age is 6-year old. The most difficult rapid, the aptly named "Surprise," which is more powerful than it looks, is a Class III. The best part of the Upper New experience is "Ducky Wars." Dive into the New River and overturn a kayak. Two people climb on the kayak and dance around until someone falls into the drink. You can also stop by "Jump Rock," which depending on water levels, can be a 15- foot leap into the New River. A generation ago a Mountain Dew commercial was shot at "Jump Rock."

The Lower New River experience, which is for those 12 and up, is thrilling but not frightening. It's a great run for those, who are just above novice level but would like to feel the power of the venerable New River, which actually is one of the oldest rivers in the world.

Prepare to get drenched as you navigate through such challenging rapids as "Dudley's Dip," where you sink to a lower echelon and are clobbered by unrelenting waves. Rapids such as "Greyhound Bus Stopper" and "Old Nasty" are punishing but satisfying.

Each of the river runs are approximately 6-hours long. Prepare for a long day by applying sunscreen.

It's an aesthetically pleasing day as the river banks are lined with trees. West Virginia is filled with green vegetation.

You'll also learn quite a bit of the local history thanks to the knowledgable guides along the New River, which flows south to north. Southern West Virginia is the source of coal and lumber from the late 1800s to the mid-20th century. The Titanic was primarily powered by coal from the area.

One of the nation's first auto manufacturing plants was opened in the vicinity by Henry Ford. While drifting down the New River you can see abandoned buildings and coal carts from a bygone era in the middle of trees.

Zip Away:  Speaking of trees. There are a number of zip lines in Southern West Virginia.

The most popular is the TreeTops' Zipline Canopy tour. The weight minimum is 90 pounds and the max is 260. There are ten zip lines, five sky bridges and a fun 60-foot rappel at the end of the trip. Some of the zips are up to 700 feet. It's easy to get lost in the moment and just stare at your destination in the treetops but part of the fun is gazing out into the bucolic forest or looking straight down at the pretty creek. There are two other zips: Timber Trek, an aerial obstacle course, and Gravity, which is designed for those who love speed and long distance zips.

The Timber Trek is no walk in the park. There are four-acres of wooded area on over 60 platforms with bridges and ziplines. It's a challenging athletic experience, which is excellent for kids. Those 4 and up can participate.

The introductory levels, yellow and green paths, are for everyone but if you graduate to the black diamond courses, you deserve a pat on the back. It helps to have good upper body strength, balance and stamina. Teens and millennials tend to favor Timber Trek, which is an aerial obstacle course.

Where to Eat: Tasty bar food is served up at Chetty's. The BBQ pork sandwich with maple syrup and the chicken slathered in Alabama White sauce taste as Southern as biscuits and gravy. Smokey's, the venerable area restaurant, has been remodeled and features gourmet dishes.

Visit one of the Coolest Small Towns In America:  According to Matador Network, Fayetteville, West Virginia is one of the most happening small towns in the country. The charming city with a population of less than 3,000 has a couple of art galleries, a theater and some fun restaurants, such as Pies and Pints, great for artisan pizza (try the pine and swine or the Thai) and the Cathedral Cafe, a quirky former church converted into a cafe.

Where to Stay: Accommodations ranging from camp grounds to luxury cabins are available from local excursion companies such as Adventures on the Gorge, Rivermen, New River Gorge CVB and Hemlock Haven Cabins.

For more information go to: