Why do so many couples wear matching T-shirts at Disney World?

Garments that reference significant others are all the rage in Orlando, apparently 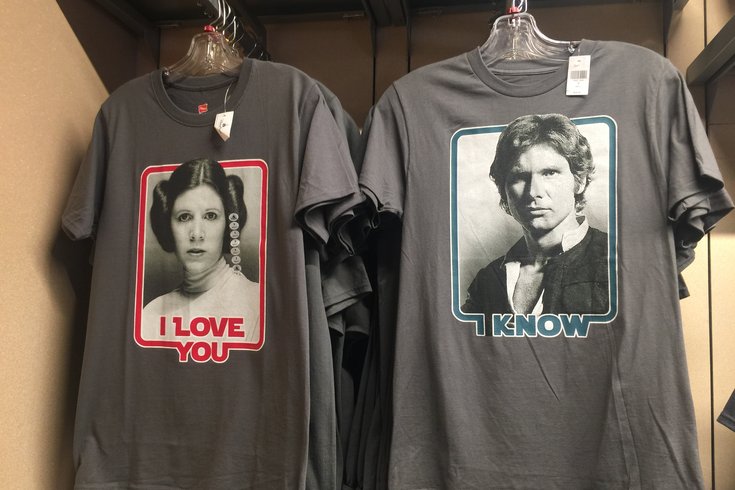 With a new Star Wars land opening at Disney Hollywood Studios later this summer, the Han Solo/Princess Leia couple's shirts will likely fly off the racks.

Far be it from me to pass judgment upon strangers – cue laugh track – but while vacationing at a slew of amusement parks in Orlando, Florida last week, one question was on loop in my mind.

Why do so many couples wear matching outfits or T-shirts that refer to one another?

That led to a slew of follow-up contemplations.

Is it territorial marking? A desperate plea to let people know they are an item? Did they fall victim to predatorily reasonable pricing amid a genius level of product placements throughout the parks?

If you’ve been to the family of Disney and (to a substantially lesser extent) Universal parks, you’ve likely seen them. Unless you were them, you may have wondered the same things.

(Side notes: This does not include the family hierarchy shirts – i.e. Mom, Dad, Son, Daughter, Grandmom, and Aunt and/or King, Queen, Prince, Princess – or relations as they stand in connection to birthday girls or boys. I get that. After all, my kid made off with so many souvenirs that we had to ship a box home rather than pay extra for baggage on the flight.)

We’re going to disney springs in matching outfits because we’re That Couple pic.twitter.com/hrwo3cR31k

Much has been written about the psychology behind couples who wear matching clothes (see here, here and here) so I needn’t delve too deeply into that.

Fine, if you're not going to check those links, here's an explanatory quote from relationship expert Nikki Goldstein, per HuffPo Australia:

"We tend to want to fit in with the person we are dating. Yes we are all unique but we want to, as a couple, look united and as if we 'fit.'"

Anyway, rather than casting aspersions upon the loving couples, I made peace with the fact that they were in a place of happiness, and that is how they chose to publicly express said happiness in the Happiest Place on Earth.

While that might not be a thing that I or you would do, it’s rude to make fun of it. Nobody should think they’re better than those who find peace in expressions of mutual happiness for all the world to see.

Still, I was transfixed to the point of not only snapping a few pictures of said garments, but noticing them everywhere I turned.

With no further ado, here’s a collection of nine of the more intriguing examples of this phenomenon that I saw. (For more, you can check out the Shop Disney site, because there are numerous offerings.)

I also invite you to share your stories of seeing matching-garment lovers in the wild, or your tales of strolling around town wearing clothes that drew attention to your lover and, perhaps, a reaction from onlookers.

Not quite sure what the reference is here other than – unless it’s a reference to Dr. Seuss’s Thing 1 and Thing 2 – waving a banner that says, “Yo, we’re totally happy together!” 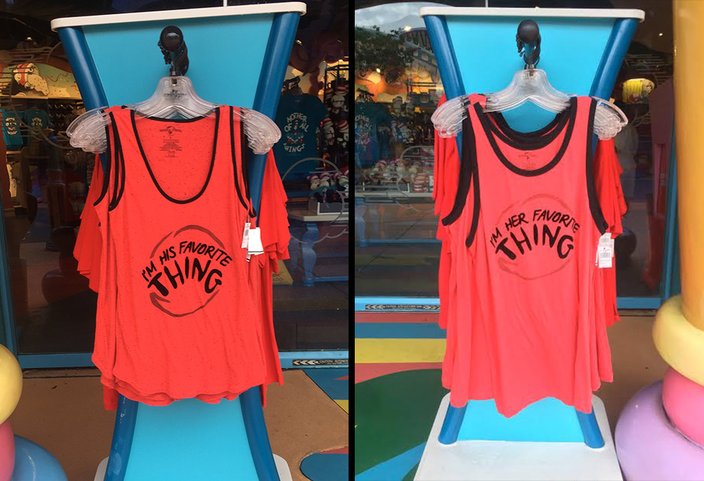 Couples T-shirts are all the rage at Disney parks in Orlando, Florida. Since it's the 'Happiest Place on Earth,' we shouldn't question the psychology behind it, should we?

I'M IN LOVE WITH THAT THING!

Oh yeah, it’s all about the Seussian Things, and this couple's T-shirt set comes complete with the same text, but the laughing Things pointing in the opposite directions. 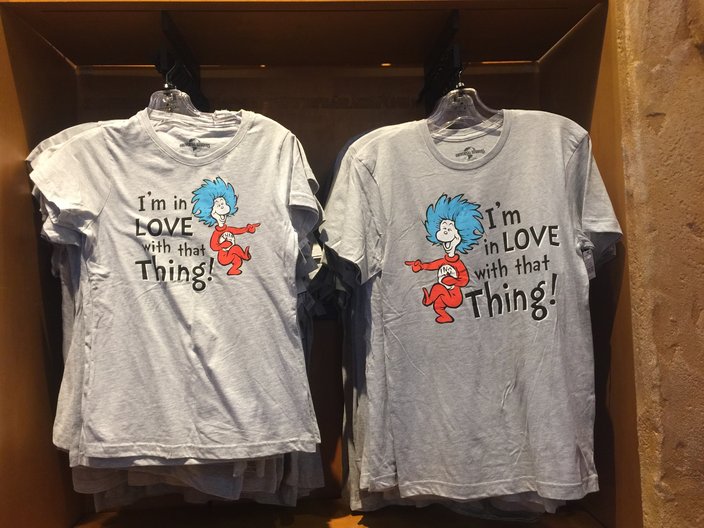 Thing One and Thing Two, sitting in a tree...

WE FINISH EACH OTHER'S ... SANDWICHES

This comes from the lyrics to “Love is An Open Door” from the Disney movie "Frozen."  The first part comes from Hans and the second from Anna, with a pithy play on the “we finish each other’s sentences” phrase. Aw.

TO INFINITY ... AND BEYOND!

This is Buzz Lightyear’s catch phrase from the "Toy Story" franchise and a for-better-or-worse garment mainstay indicating that those wearing it had found eternal love.

Turns out it goes beyond mere apparel – though there is a lot of that, too.

This couple took their love "to infinity and beyond" when they tied the knot in Chicago this summer https://t.co/twJpSbbnhQ pic.twitter.com/8VyU495QOZ

HER KEEPER ... HIS CATCH

You just can’t beat fishing puns when it comes to love everlasting, can you? 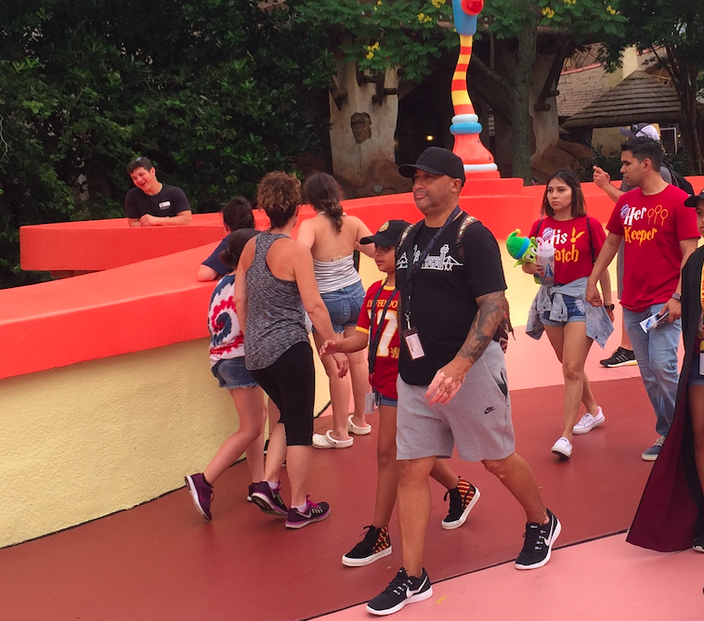 This classic exchange between Han Solo and Princess Leia comes near the end of “The Empire Strikes Back,” just moments before the former is frozen in carbonite at the hands of Darth Vader, who will then give the frozen body to Jabba the Hutt.

(Spoiler alert: Leia will help defrost her lover in the opening scenes of “Return of the Jedi.”)

Considering that Star Wars: Galaxy’s Edge is slated to open at Disney’s Hollywood Studios by summer’s end, I reckon these shirts will become the most popular garments for couples in Orlando, at least for a couple of months.

This one is all about "The Lion King," an animated favorite from Disney, complete with imagery calling attention to characters Simba and Nala. 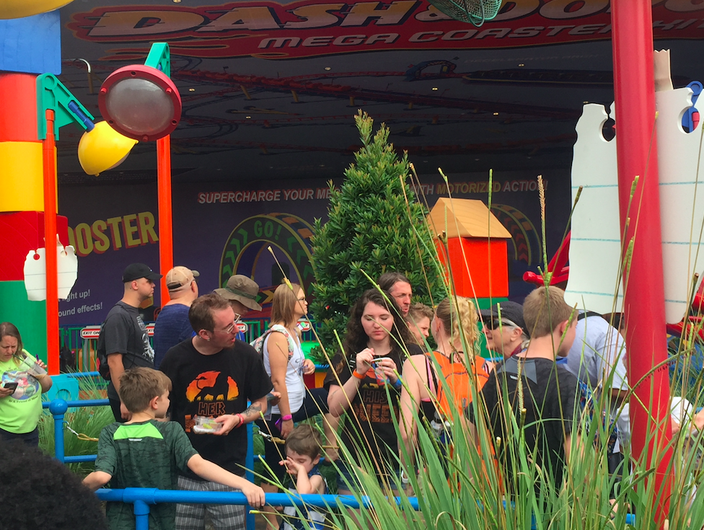 The circle of romantic-garment life in Orlando! 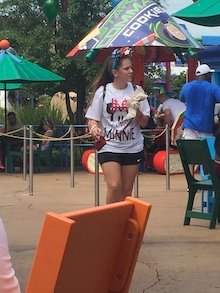 She's looking for her Mickey in a food court at Disney Hollywood Studios.

This one’s self-explanatory, if not a wee bit desperate.

Are you not her Mickey or his Minnie already?

And if not, are you walking around an amusement park with such messaging in the hopes that a stranger will walk up and say, “Yo, y’all look really cute together. You should TOTALLY be Mickey and Minnie together!”

Should that happen, you should think about upgrading to Mickey and Minnie matching gear.

The shirts, which look like this, are far from the only merch available for Pixar/Disney's "The Incredibles," apparently.

Should you be interested in seeing a multi-minute video reviewing all of said merch, you can do so via this link.

These two – inspired by the seagulls in Pixar/Disney's "Finding Nemo" – were the ones that made us laugh the hardest at the concept of matching shirts, thanks to the sheer aggressive messaging. 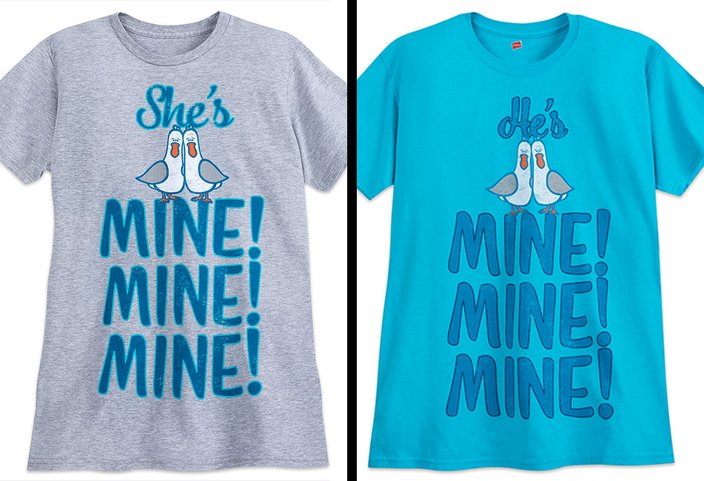 Seems a lot cuter in context, though.