You see them all the time, but what color of hospital garment is best? 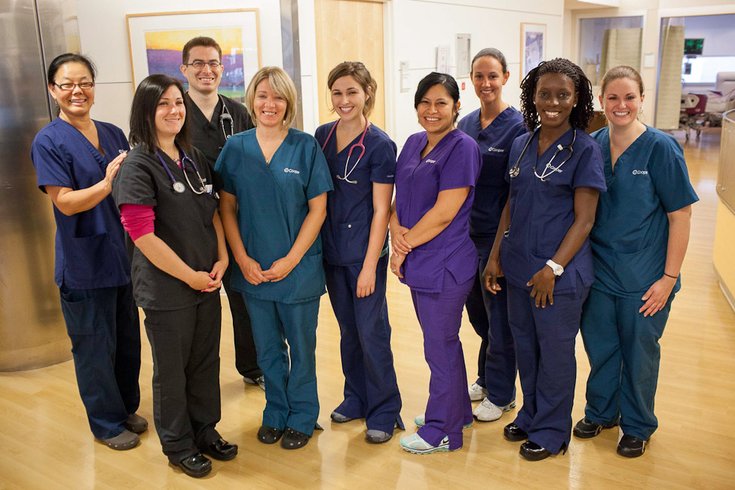 Scrubs come in a variety of colors, including those worn by staffers at Cooper University Hospital in Camden.

If you’re ever near and/or inside one of Philadelphia’s 76 million hospitals, you’ve seen them, but probably paid them little mind. We’re talking about scrubs, those comfortable garments made of various fabrics including polyester and cotton.

For the pop culture-minded folks, they’ll be on display on the Fox series “Scream Queens” this season, as well. For sticklers to the rules, they’re also the topic of dress-code and germ-spreading debates. For the charitably minded, well, they come into play for humans and pooches as well.

While many people liken that color coding to a caste system of sorts, the uniforms come to define wearers' positions within their places of employment. The garments also non-verbally communicate the employees’ roles with patients and their families.

This post is not about status, though. It is about fashion aesthetics. Specifically, it’s about ranking scrubs hues by how pleasing they are to the eye.

There are many places one can purchase their scrubs in the Philadelphia area, but the fine people at Nurses Uniform Place, 1104 Chestnut St., allowed us to browse their showroom filled with racks and racks of scrubs to compare and contrast colors available to the local medical community.

In addition to asking those who don scrubs to work for their favorites and least favorites, we also spoke with several local hospitals to determine which positions wear which colors between their walls. When applicable, those details will be included in the listings. (Numbers listed in parentheses indicate popularity by sales statistics, courtesy Cherokee Workwear, the worldwide leader in scrubs.)

We invite you to share your thoughts and personal rankings either in the comments section or via Facebook and Twitter, whether you're coming from a scrubs-wearer or scrubs-observer perspective.

With no further ado, here are the definitive rankings of selected Scrubs Colors (non-patterned/flaired division):

14. Red (9th most popular by sales data). Blood is red. Do you really want to see the human embodiment of blood walking toward you when you’re laid up at the hospital? Didn’t think so. Caveat: If they’re worn in an awareness campaign, red scrubs are just fine. 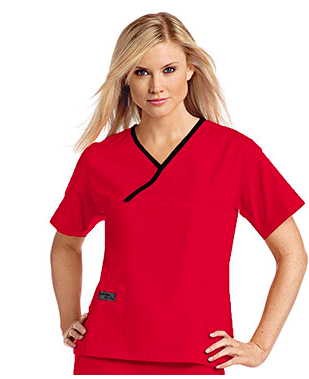 13. White (5). Says a local nurse, “I sometimes see people in all white scrubs. They are often seasonally inappropriate and definitely impractical for someone dealing with human beings. Poop, blood and worse should not be outfit accents, and patients sometimes have trouble keeping those things to themselves.” And she’s totally right.

Stephanie D. Conners – Senior Executive Vice President, Hospital Chief Operating Officer and System Chief Nursing Officer at Cooper University Hospital in Camden, New Jersey – says there was a move back toward white nursing scrubs about 10 years ago, but the nurses “weren’t particularly fond of” the hue because “they’re uncomfortable and turn yellow.” She’s totally right, too. 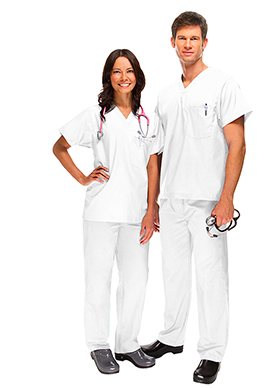 12. Khaki (8). You’re in the hospital, hopefully not a war zone or prison. Military and inmate hues are too stressful for a healing environment. And then, there’s this review from a local nurse: “At the hospital where I worked, it was voted that RNs wear khaki colored scrubs. Looks like vomit. I voted for ceil blue. I hate the color khaki, army green or any shade that resembles what gets secreted or excreted from the body!” 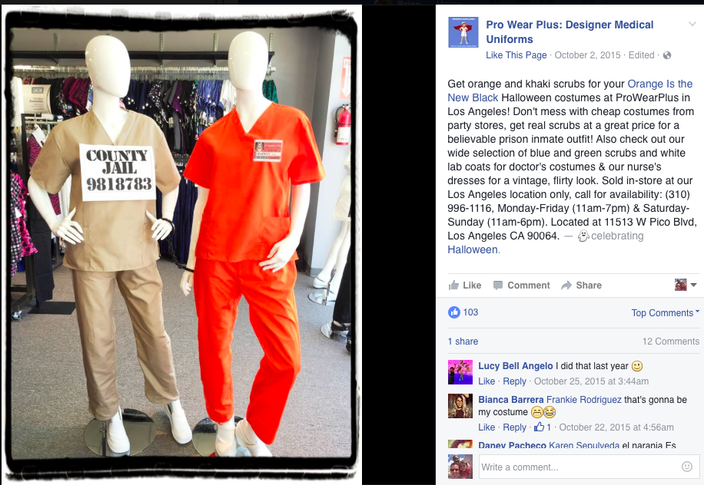 11. Burgundy/Wine (7). A nurse anesthetist at a hospital in the University City area immediately selected burgundy as her least favorite color of scrubs. Why? “I really don’t have a good reason,” she says. “There are just so many other good colors.” Sometimes, fashion sense doesn’t translate well in the spoken word. 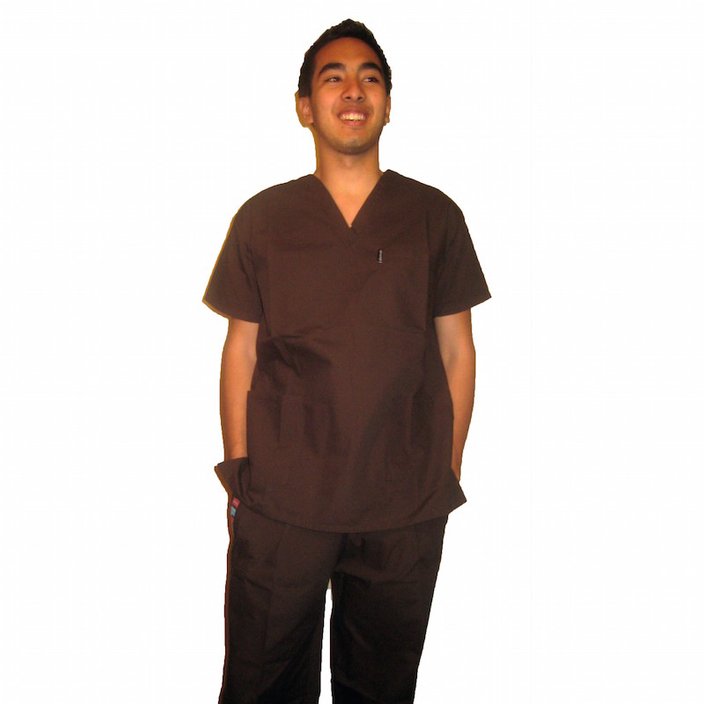 8 (tie). Shocking (or Regular) Pink. Too much of a central-casting vibe for my tastes, but hey, some people like it, and I get that. It’s soothing. Not sure how I’d feel wearing it if I were a nurse, but I’m not. 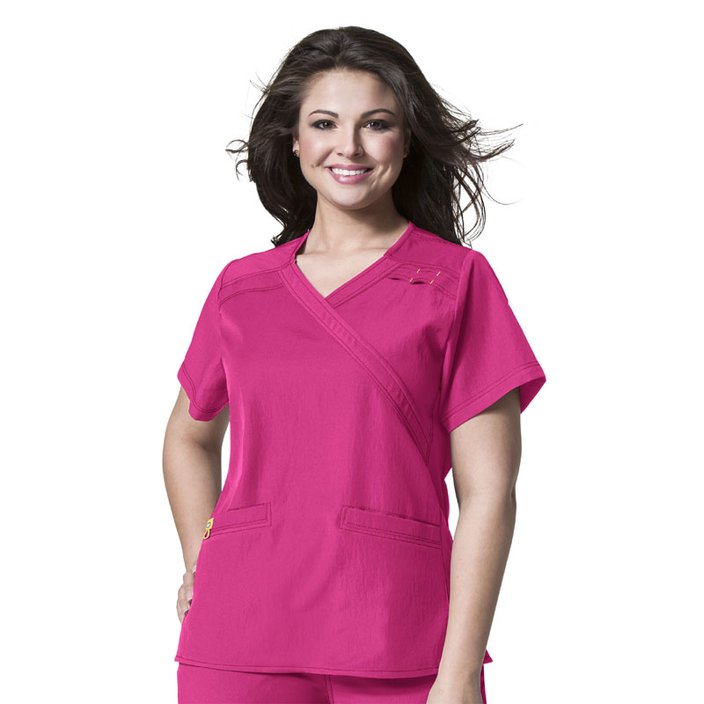 Purple/Eggplant. Fashionable, yes! Reminiscent of food, absolutely! But good on the eyes and likely empowering to wear. It's a unique hue, a good hue. 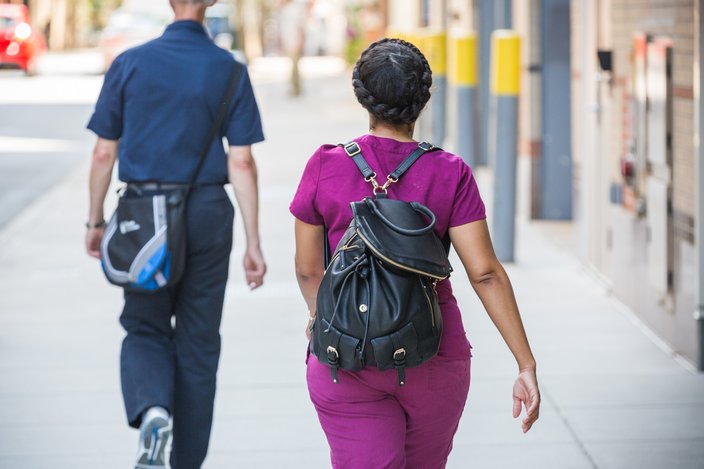 Purple scrubs near the intersection of 8th and Walnut Streets.

We are oh so happy to see these purple scrubs back on campus! And to our first-semester students: You've got this💛💜 pic.twitter.com/3edRHwaTpk

7. Celadon/Green. Say you’re a tall surgeon and you’re asked to wear this – or any non-dark shade of – green. “You end up looking like Gumby or the Jolly Green Giant,” says a 6-foot-7 trauma surgeon with ties to the region. 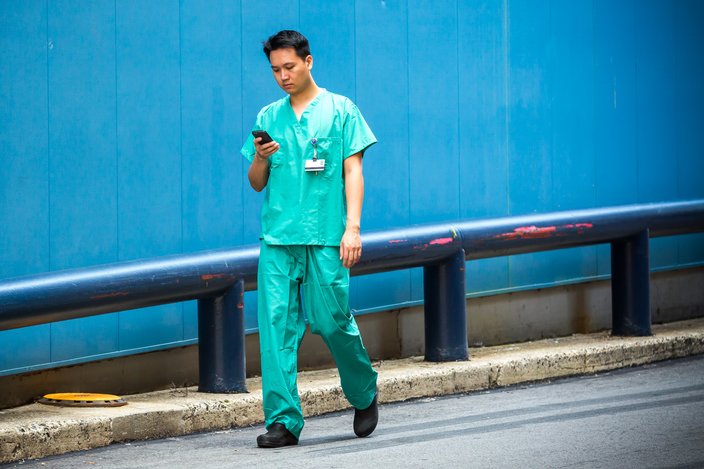 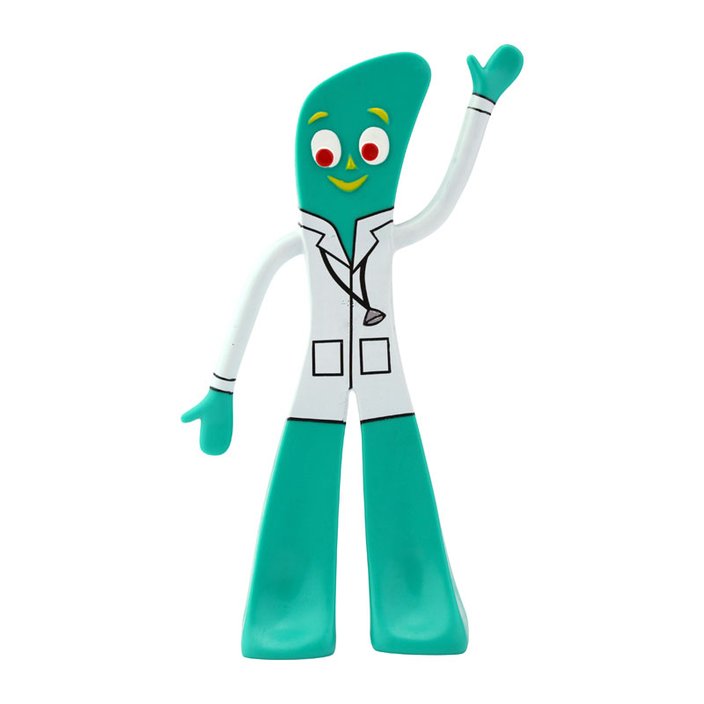 6. Gray (11)/Taupe/Pewter (3). Neutral colors are good. Many nurses/doctors/techs spoken to during the reportage for this listicle deemed others their favorite, but credited this hue, as well. It’s like in sports when they tally up the second and third place votes for the MVP award. 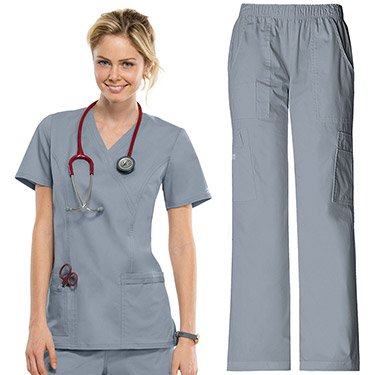 5. Hunter Green (14). Explains a medical sales rep, “Sometimes, they make us wear orange scrubs like we are some kind of prisoners so I HATE those. I have a hospital that has a lovely, deep, forest-green scrub that I think are nice. I like them because darker colors are slimming and scrubs aren't exactly known for being flattering.” 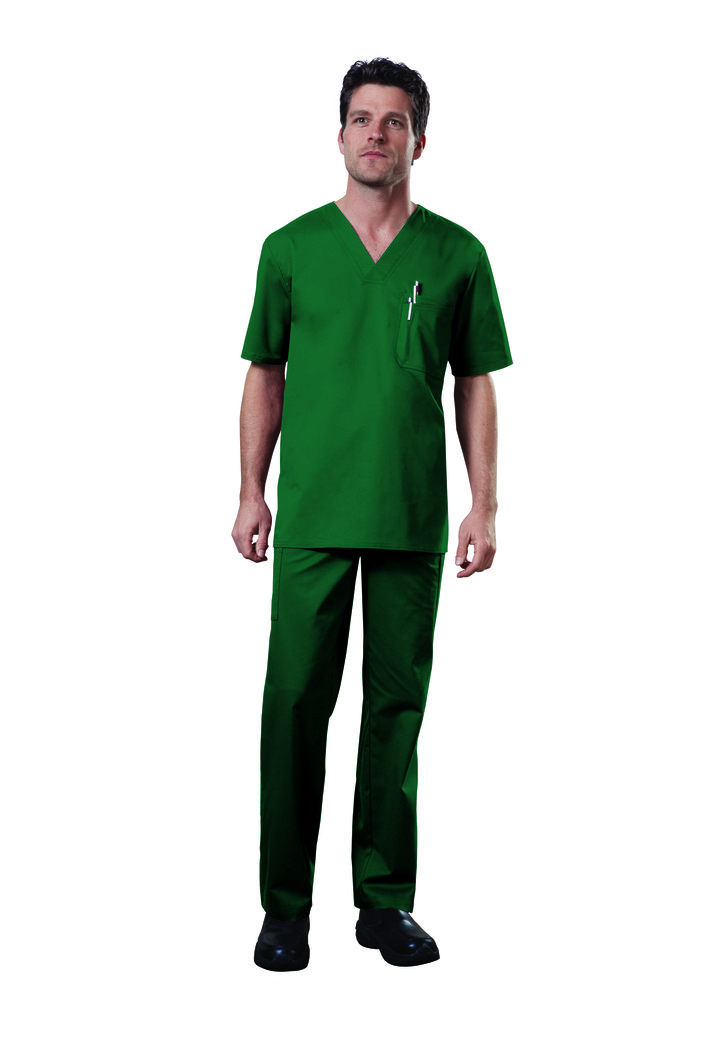 4. Navy (2)/Royal Blue (4). Says a male nursing student in Philadelphia, “Navy blue is manly, and I look like a sailor. Lavender wouldn't have the same effect.” He makes a good point. So does a trauma surgeon who noted that “blood doesn’t show as much” on dark-blue scrubs. Navy blue is also a strong color, and when you’re healing up, you need all the strength you can get. In fact, notes Conners, navy blue scrubs remain the most popular shade amongst Cooper nurses. 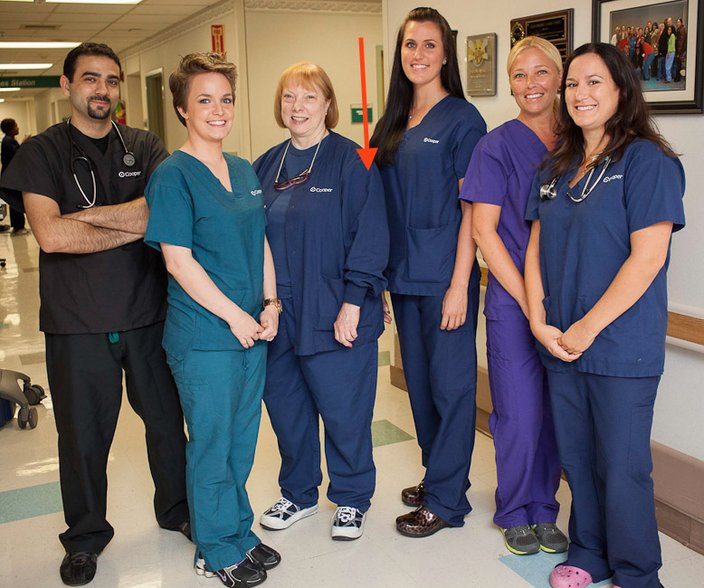 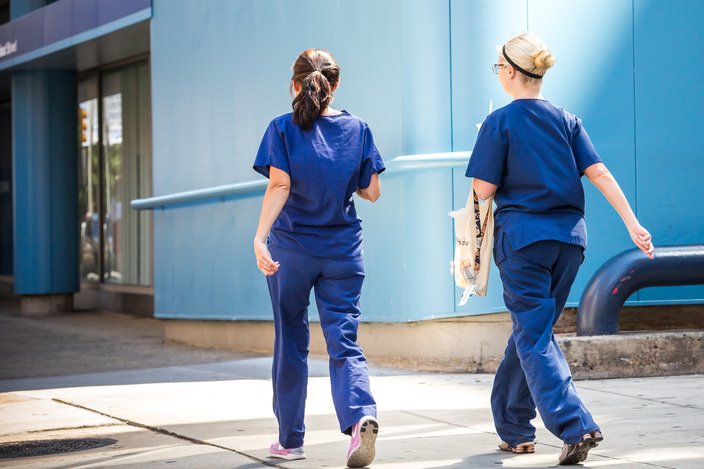 What you lose in bodily fluid cover-up ability, you make up for with the stylishness of easygoing hues. I would be happy to go to work dressed in these colors, even after Labor Day. Yeah, yeah, that's all about white pants, but pastels do work better when the temperature goes higher. These are don't-worry-be-happy garments worn in places of anxiety and fear. A noble counterbalance. 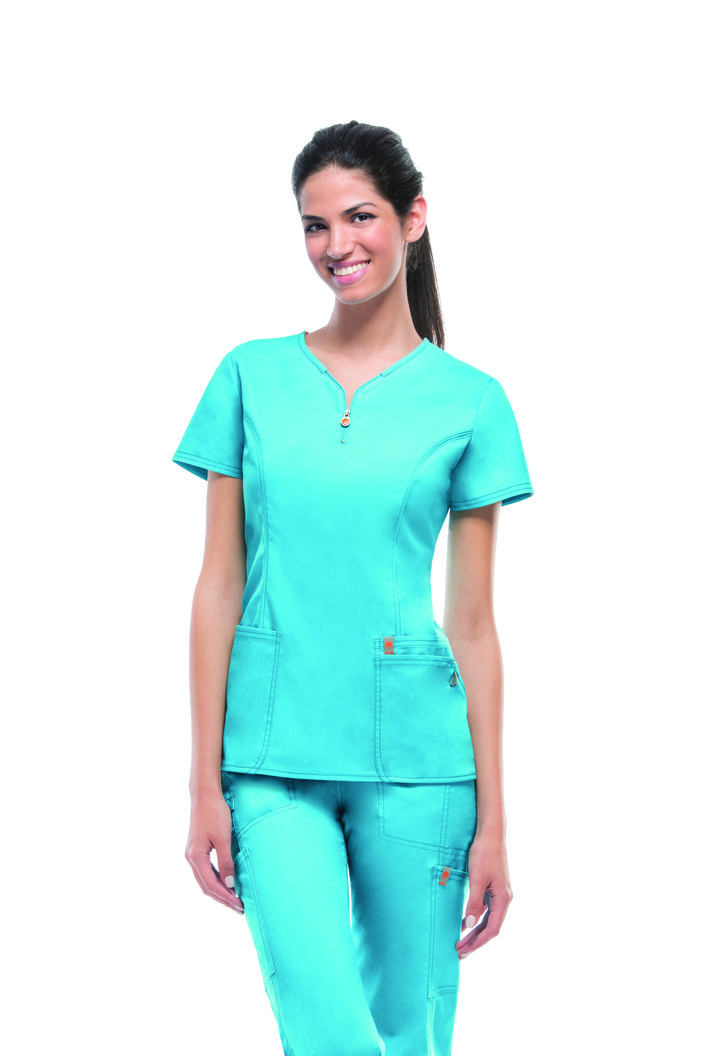 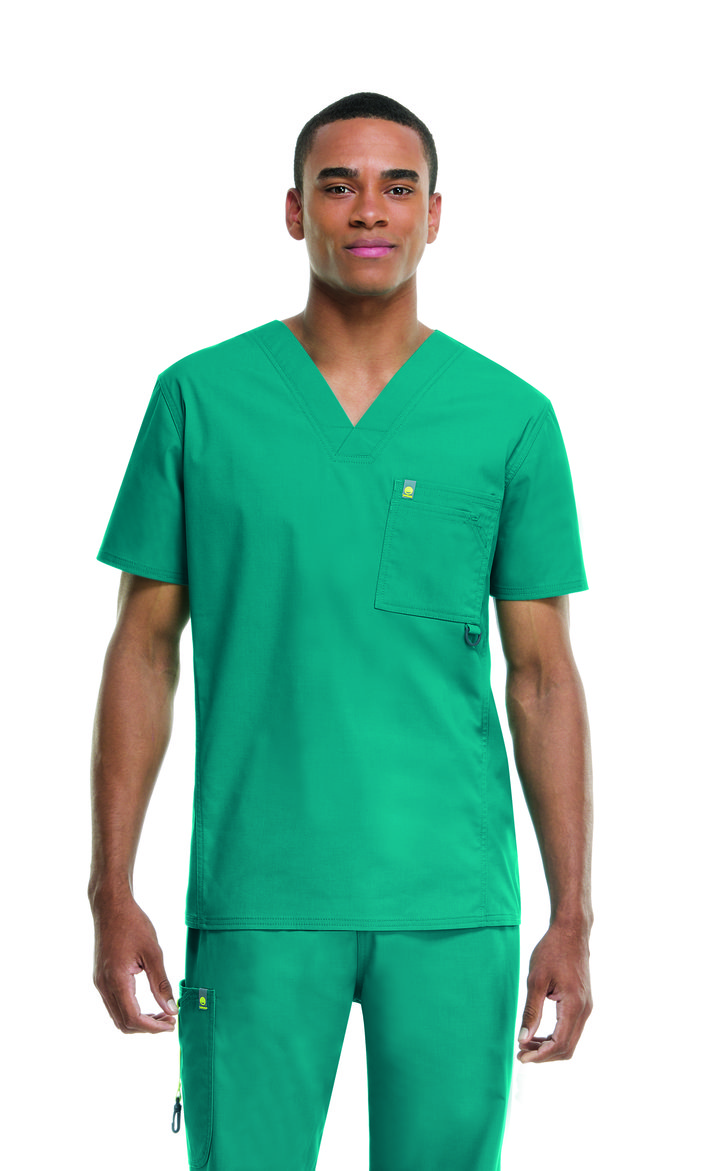 2. Ciel (6). These are a little darker than those under the TTCLB umbrella that ranked No. 3. Says one local nurse: “Ciel blue and peridot green color: Those are like modern classic in the hospital scrub world. They’re my favorite.” She is not alone. This, from a nurse at Temple: “Temple only has blue scrubs, so those are my favorite because wearing them means you're part of an amazing team! Go Owls!” Pride and eye-pleasing shades. Can’t get much better than that. Also, more authoritative than the previous blue-hue entry. 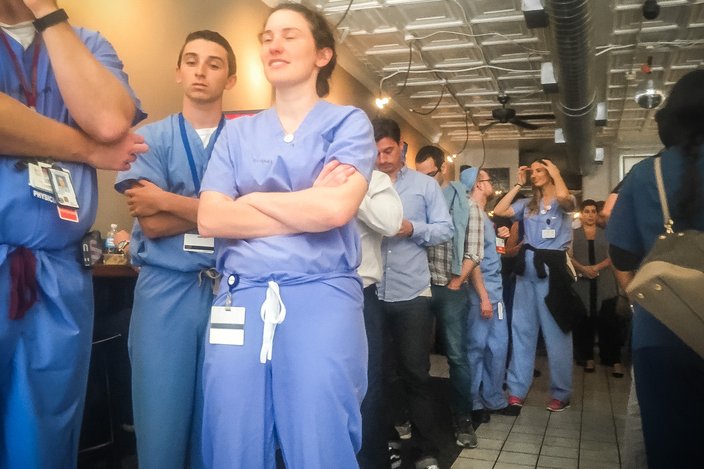 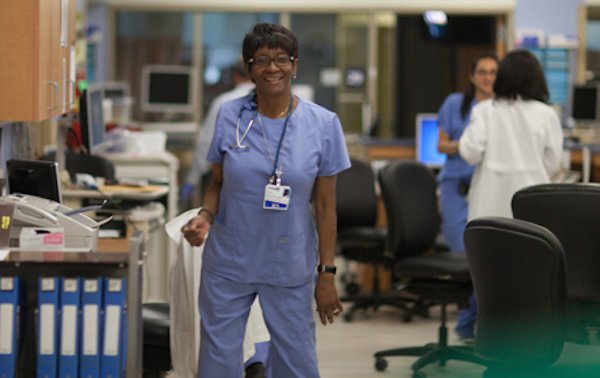 1. Black (1). Authoritative and slimming. These are good qualities for workplace attire, but especially when your profession requires an air of authority. We're talking about life and death here, and while black is often worn to funerals, those who wear it at work are in the business of delaying those events. 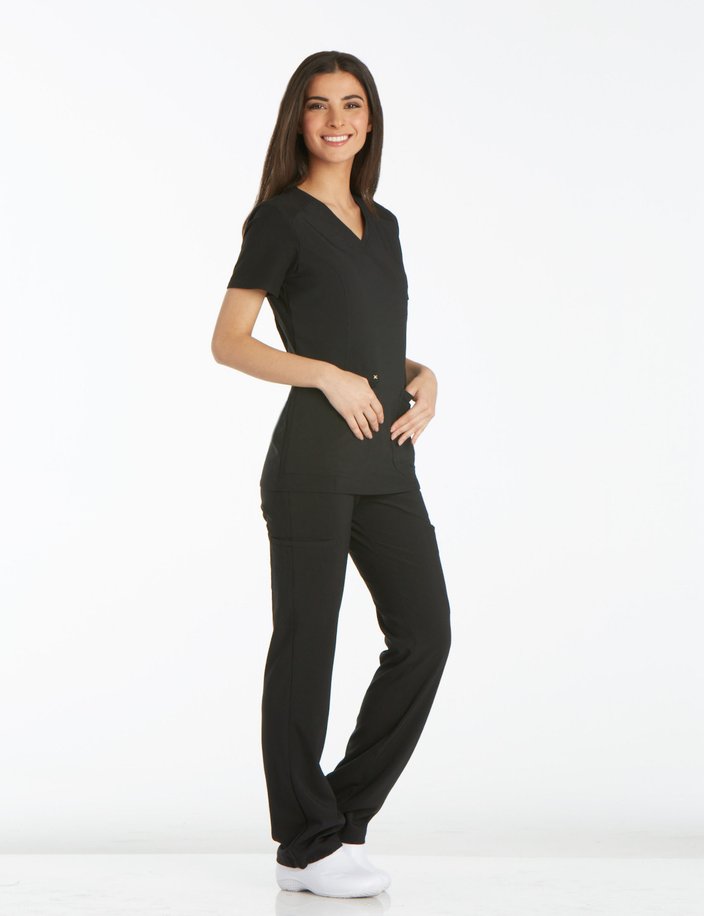