The outsider candidates would have both benefited from mutual support, but only one side recognized that potential 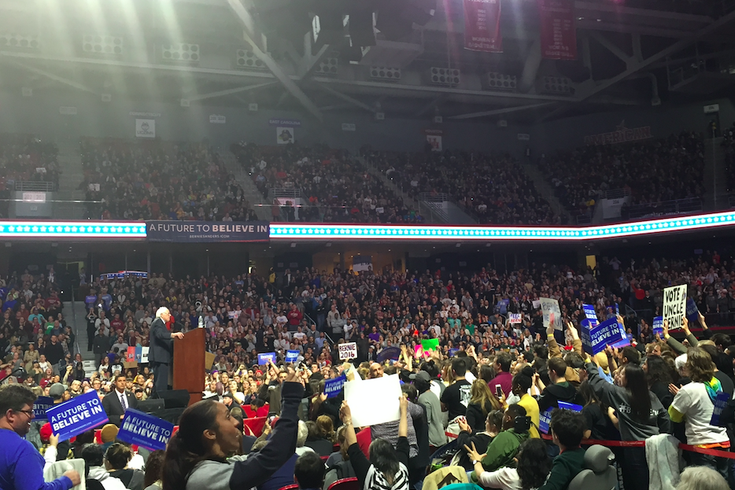 Presidential candidate Bernie Sanders brought a familiar message to Temple University's Liacouras Center in April, and the crowd ate it up.

Well, you’re finally on the clock, active-voter Pennsylvanians who will soon tell the world you who think should represent the two major political parties in the general election for president.

Chances are you’ll collectively answer Hillary Clinton and Donald Trump. That’s fine, I suppose. Majority rules (excluding, of course, those instances when delegate calculations carry more weight than the will of the people).

For now, let’s talk about another race that Pennsylvanians will also decide, that being the Democratic Party’s primary for the right to face incumbent U.S. Sen. Pat Toomey in November.

It pits Rhawnhurst native Katie McGinty against former U.S. Rep. Admiral Joe Sestak and current Braddock, Pa. Mayor John Fetterman. (Fun facts: Both McGinty and Fetterman stopped by my Quizzo in East Falls during the campaign; while Sestak declined, he did send a handwritten thank-you note for covering a speech he gave in Philly. Which is to say, because of interactions tangentially tied to the campaign, I think they’re all decent people.)

Well, a Monmouth University Poll released Wednesday has McGinty and Sestak in a dead heat (tied at 39 percent) with Fetterman drawing 4 percent and the remainder undecided. The leaderboard doesn't shock me, but that low Fetterman number sure does.  (Edited to add: Another poll has Fetterman with higher numbers, but he still trails both by a considerable margin.)

I first met the atypical mayor of Braddock in September when he was just launching his foray into national office. He struck me as a remarkably smart man who represented the ideal candidate at a time when Americans are seeking a break from the status quo. He didn’t sugarcoat answers, and he spoke from the heart. That our politics align on more or less every issue we discussed didn't hurt much, either.

As the campaign progressed from there, the one thing he didn’t have was discernible momentum to overcome his opponents' resumes, establishment ties and deep campaign coffers.

When I saw him meeting voters outside a Bernie Sanders rally at Temple University earlier this month, he told me that this is the audience he needs to shock the world, and that he had faith that it would happen. As was the case at Quizzo, droves of people wanted to take selfies with him to the point that staffers told me of a "rockstar" vibe at many events.

Here's what he said to me that night outside of the Liacouras Center: “Who else can draw this kind of crowd? Anyone who thinks Bernie won’t win in Pennsylvania aren’t plugged in to what’s going on out here. … We’re moving up in the polls, and connecting with Sanders’ voters is critical to that. [The campaign is] going largely as we had hoped and anticipated it would.”

At least according to the Monmouth poll, it decidedly has not, and that bummed me out to the point of contemplating the rationale behind it. While observing the campaign this spring, there was a nagging thought: Sanders hadn’t done a lick to help a candidate who fits the mold of what I think he’d like to have in the Senate if he were to win the presidency.

I couldn’t quite fathom why Sanders (for whom I will also be voting because he also represents the status-quo rejection this nation needs; and, fair warning, I won't respond to story comments that reference "socialism"). Turns out I wasn’t alone in thinking that.

It was illogical and spoke to a detachment on behalf of the man seeking to best Hillary. That detachment speaks to why Sanders’ “revolution” warrants quote marks around the word itself.

Had Sanders – or at least his campaign – jumped aboard the Fetterman bandwagon, as the behemoth mayor so vocally did for him, maybe neither would be trailing in the polls in Pennsylvania. Since they do, it’s easy to slip into a mindset that says “my votes have been rendered irrelevant next Tuesday.” It's as if Bernie propagated a self-fulfilling prophesy that holds outsider candidates (Donald Trump-excluded category) can't win.

It's disappointing enough to make me rethink my Sanders vote and just cast a write-in for Lionel Messi seven months earlier than anticipated.

Maybe Sanders and Fetterman will separately be able to work around the establishment support that went their foes’ way from Philly to Pittsburgh.

Maybe polls really don’t get much response from the folks who lined up around a square block to hear Sanders give a speech (that has started to feel like a record on loop, it must be stated).

It sure doesn’t feel like it, though, and this Pennsylvanian who thought John Fetterman offered the best chance to shake up D.C. and a distinctly fresh – intimidating, even – mindset to Capitol Hill blames nobody but Bernie Sanders (who is wrong for opposing the soda tax, by the way) for not recognizing, and embracing, that prospect.