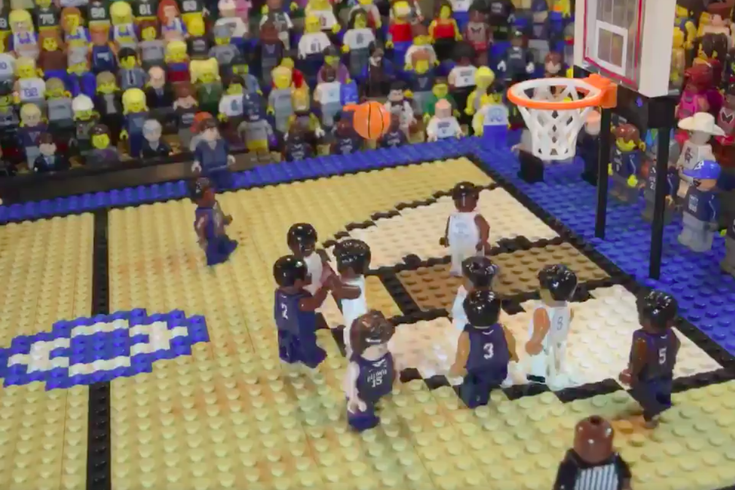 Somehow, Jay Wright is just as stylish as a Lego character.

They say that having children will change your outlook on life – I'm not there yet, but that's what I've been told all my life. Apparently, not only is that true, but it also appears to extend into one area that's as personal and sacred to some as music or politics or religion: sports.

What else could drive a man to spend 40 hours reliving one of his favorite team's most heartbreaking moments of all time other than his love of his child?

By day, he's a marketing specialist for a building materials company called Franklin Building Supply in Idaho. By night, he's a stop-motion animator who got his start re-making scenes from "Breaking Bad" but now focuses on sports.

He's also a father of three ... and a University of North Carolina basketball fan.

"I'm not really sure [why I became a UNC fan]," Jacobs told PhillyVoice on Wednesday night, adding that he didn't go to school there and never lived in the area. "That was the team I picked when I was a kid and it just kind of stuck."

Despite her dad being a longtime UNC fan, Jacobs' oldest daughter, Jovie, is a Villanova fan. But how?

"She just picked them in her bracket last year and they won the whole thing in dramatic fashion," he said. "And so now she'll probably be a Villanova fan for life."

So for Jovie's 11th birthday, Jacobs decided to recreate a moment that represents something totally different to her than it does to him: his beloved Tar Heels' last-second loss to Villanova in last year's national title game.

Oh, and did I mention he does it with nothing but Lego pieces?

Even though I am a @UNC_Basketball fan I made this for my daughter because she cheers for @NovaMBB and today is her birthday. #Marchmadness pic.twitter.com/PM4LL1Ecr7

Even if you didn't already know, the quality of that video and attention to detail – check out Jay Wright's reaction to Kris Jenkins' shot – makes it quite obvious this was not Jacobs' first attempt at one of these. In fact, he's made more than a few.

"I've probably made 50 stop-motion videos over the last four years," Jacobs said, adding that his "Breaking Bad" videos "developed a bit of a cult following when some of the actors started sharing them on social media."

Nowadays, he sticks mostly to sports. And he's gotten so good at it, that it's no longer just a hobby. It's a part-time job.

"When ["Breaking Bad"] ended, I transitioned into sports videos," he said. "It started with golf videos and after a few of those went viral, I started getting paid to do football and basketball videos."

His favorite? A toss up between his most recent video and this on of that wild BYU Hail Mary.

His work has been featured on ESPN and other news outlets, which is made even more impressive by the fact that he's pretty much entirely self-taught.

"Trial and error, really," Jacobs said when asked how he learned to make these tedious and time-consuming videos. "There was a stop-motion artist named PES that I always watched on YouTube. I found a stop-motion app for my phone and then edited the sound on my computer and merged the two together."

Since he started getting paid for all that work, Jacobs has upgraded his equipment and even has a small Lego studio in the corner of his apartment, which is home to 500 mini Lego characters and what he says are "more bricks than I can count." 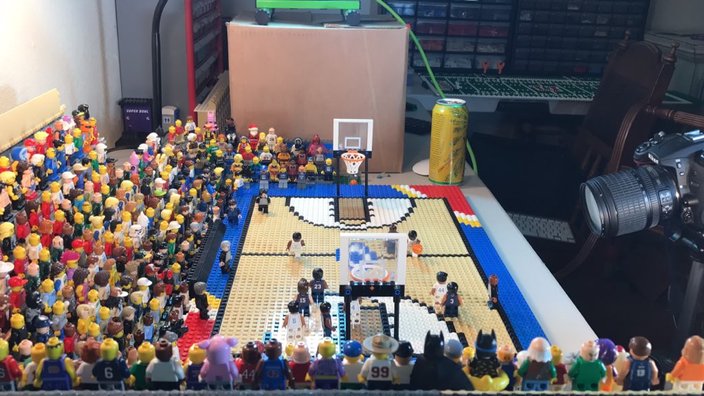 A look at Jacobs' Lego studio during filming.

That's where he spent about four hours each night over the past couple of weeks – 40 hours in total – creating the Villanova video you see above, which he says was probably the most difficult to date and included about 400 of his Lego people. That's a lot of time to spend re-living a moment you'd probably rather forget.

The things parents do for their kids...

If you want to watch more of Jacobs' videos, you check him out on Instagram: @goldyeller.