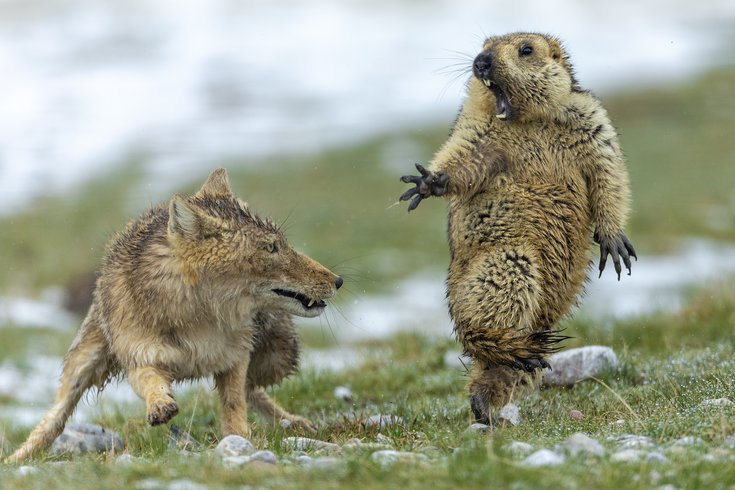 Yongqing Bao/Wildlife Photographer of the Year

Academy of Natural Sciences new exhibit 'Wildlife Photographer of the Year' features 100 of the world's best wildlife photographs. Pictured above is 'The Moment' by Yongqing Bao of China. It depicts a fox and a marmot.

A new exhibit showcasing amazing animal photos is coming to the Academy of Natural Sciences of Drexel University.

"Wildlife Photographer of the Year" will open Sunday, March 29, at the museum on the Benjamin Franklin Parkway.

RELATED: Philadelphia Orchestra to perform free concerts at venues across the city

Launched in 1965, Wildlife Photographer of the Year is the longest running nature photography competition in the world. It's organized and produced by the Natural History Museum in London.

The Academy of Natural Sciences will be the first institution on the East Coast to display the exhibit of 100 images from the 2019 contest. A panel of international experts selected the images from nearly 50,000 entries.

Visitors can view the overall winner, "The Moment," captured by Yongqing Bao from the Chinese province of Qinghai. The image shows a standoff between a Tibetan fox and a marmot.

Also on view will be the now famous image of two mice fighting in London's Underground, captured by Sam Rowley from the United Kingdom. "Station Squabble" won the People's Choice Award.

"The scenes captured by these talented photographers tell thought-provoking stories about our planet and prompt us to think differently about the natural world and our responsibility to protect it," Academy of Natural Sciences president and CEO Scott Cooper said.

"Wildlife Photographer of the Year" will be on view from Sunday, March 29 through Sunday, Aug. 23.

"Wildlife Photographer of the Year"