Will Philly DNC delegates be greeted by a nude, all-male art exhibit? 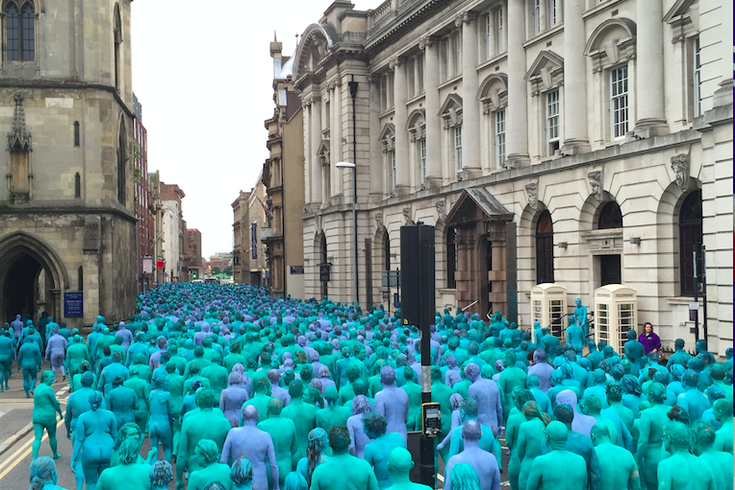 Artist Spencer Tunick will host a similar-minded photo shoot outside the Republican National Convention host building this week. He considered doing one in Philadelphia for the DNC as well.

Back in May, artist Spencer Tunick’s plans to photograph 100 nude women holding large, round mirrors outside the Republican National Convention in Cleveland made for the sort of headlines that one would expect when an artist photographs 100 naked women in proximity to Donald Trump.

"I could never have imagined there would be such a heightened attention to the male-versus-female dynamic of this Cleveland juggernaut of a convention, but I feel like doing this will sort of calms the senses. It brings it back to the body and to purity," he told Esquire magazine at the time. "The mirrors communicate that we are a reflection of ourselves and the world that surrounds us."

The exhibit is called “Everything She Says Means Everything,” and it will be the subject of many headlines come early next week. But, it also got us wondering – amid all the chatter about protests and security zones – whether we’d missed the pretty big scoop that a lot of flesh would be publicly exposed in Philadelphia during the Democratic National Convention.

Tunick, who is widely known for his nude shoots, told PhillyVoice via email this week that he harbored plans to do a similar shoot in Philadelphia, going as far as purchasing the website www.spencertunickphiladelphia.com at the same time he established the Cleveland site.

Alas, it didn’t pan out.

“I just didn't have the on-the-ground contacts and help with organization as I did in Cleveland so I had to pass on making an artwork for the DNC,” he wrote. “It would have been all men and the concept/idea was going to be different.”

Well, that would’ve been something.

Tunick shared that information after he'd just returned home from a shoot in Hull, England and was preparing for an eight-hour drive to Cleveland in advance of the shoot, which will take place on Sunday.

He did have some kind words for the DNC host town, though.

“I hope to do a work in Philadelphia one day,” he wrote. “I love the city and the streets and the architecture.”