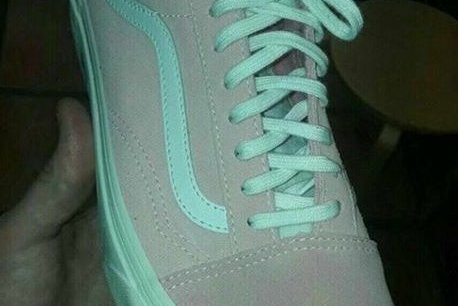 Will Smith posted a picture of a Vans Old Skool sneaker on his Instagram account on Monday that supposedly changes color based on a person's left or right brain dominance. This isn't how the brain works, however. As long as we have an intact corpus callosum — a tract of fibers that form the connection between the right and left hemispheres — we use both hemispheres of our brain.

Remember how fun it was to fight with everyone you knew about the "correct" colors of that viral dress in 2015?  Yeah, well it's coming back in the form of a sneaker thanks to a Will Smith post ... and it returns with all the incorrect pop psychology anyone could ever dream of.

The picture has reemerged after originally being posted by a Twitter user named Alicia Marie back in 2017. It shows a Vans Old Skool sneaker that supposedly changes color – either pink and white or grey and green (or teal) – based on a person's left- or right-brain dominance.

Will Smith posted a video discussing the image on Instagram on Monday. “What colour do you see? Show five or six people around you and ask them what they see. I think you’ll be surprised," Smith says. “There’s no right answer. But ... it’s definitely not pink!”

Which colors do you see?? 🧐

Lizzo posted the same photo with the caption, "I see grey and teal, but my whole team sees pink and white, help."

But the truth is, our brains have something called the corpus callosum, which connects the right and left hemispheres. This structure in the brain allows the two hemispheres to work together to not only construct what we see but how we see it. In reality, most people use both sides of their brain 100% of the time.

So, while you may see green and grey (which is correct), just remember that it doesn't necessarily make you more analytical than the person who sees pink and white.