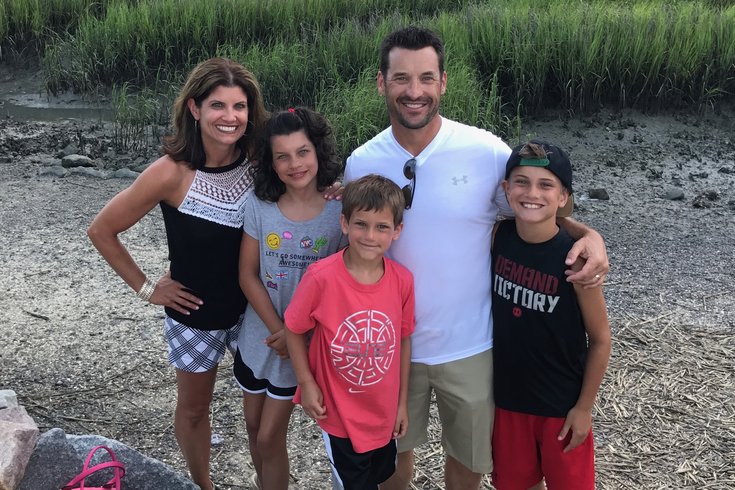 John and Kristine Boruk with their daughter, Jade, and two younger sons.

John, the sports anchor and Flyers Insider at NBC Sports Philadelphia, and Kristine wondered why Jade wasn’t gaining weight or getting taller. Why she was having problems eating and sleeping; why simple noises would easily startle her; why she wasn’t able to do the things other toddlers were able to do.

It’s a gut punch... I got home from that appointment and I broke down and I tried to wrap my head around everything, as did my wife.

It took nearly two years to figure it out, as the Boruks ran the gamut. Doctors and nutritionists were seen. But no answers. Until, finally, a co-worker of Kristine’s suggested they see a geneticist. After meeting renowned Dr. Elaine H. Zackai, the Director of Clinical Genetics and the Director of the Clinical Genetics Center at Children’s Hospital of Philadelphia, John and Kristine were introduced to a new word and a new reality on February 11, 2008, “Williams syndrome.”

Discovered by New Zealander John C. P. Williams in 1961, Williams syndrome, which affects one in every 10,000 people, is defined by medical journals as “a developmental disorder that affects many parts of the body. This condition is characterized by mild to moderate intellectual disability or learning problems, unique personality characteristics, distinctive facial features, and heart and blood vessel (cardiovascular) problems.

“People with Williams syndrome typically have difficulty with visual-spatial tasks such as drawing and assembling puzzles, but they tend to do well on tasks that involve spoken language, music, and learning by repetition (rote memorization). Affected individuals have outgoing, engaging personalities and tend to take an extreme interest in other people. Attention deficit disorder (ADD), problems with anxiety, and phobias are common among people with this disorder.”

The Boruks have been aware of it the last 10 years. They saw their daughter deathly afraid of the sound of vacuum cleaners, and they had to be very observant when she walked up and down the steps because of visual-spatial issues. Jade still has to put on headphones during thunderstorms and has issues with fireworks, since a byproduct of Williams is acute hearing issues.

Jade, who will turn 13 in September, attends regular classes at Charles F. Patton Middle School in Kennett Square, Chester County, with some learning support sprinkled in. Overall, she’s highly functioning, energetic and in many ways typical of other 12 year olds, after undergoing years of physical, speech and occupational therapies.

Though it’s a decade ago, for John, the father of three, Jade and two younger sons, one who will turn 11 next week and another 6, hearing his precious baby girl had Williams was a devastating time.

“It’s a gut punch,” said John, who’s originally from Arlington, Texas, and has been a stalwart in the Philadelphia sports market since July 2006. “I was more in denial in the sense that she was so young, and children mature at different ages, they adapt and they learn things eventually over time. Then it hits you. I felt so badly for my daughter that she would have a life full of challenges. That’s where my head was at the time — that this wasn’t fair to a 2-year-old, and she didn’t know what was in front of her.

“I was in a disbelieving state of shock, because you’re always under the belief that every child you have will be healthy, and not have issues and setbacks, and a typical lifestyle. So when they tell you a normal Williams kid doesn’t drive a car, or go to college, that sort of thing, it was really hard for me to stomach all of that on that particular day. I got home from that appointment and I broke down and I tried to wrap my head around everything, as did my wife.”

Kristine, a regional sales trainer for a large pharmaceutical company, was already two steps ahead of John, thinking and planning of what needed to be done. One important component for the Boruks about Jade, which they continue to do, is treat her like they would any 12-year-old. She gets into tiffs with her siblings, like brothers and sisters do. She attends school and has friends. She also possesses a great ability to recognize songs within seconds. She can lead a productive life, go on to college and live independently when she gets older.

There’s also something very special about children with Williams syndrome.

“One thing also prevalent with children with Williams is that they’re very outgoing, very social, they want friendship and closeness with other people,” John said. “There is a very sweet, genuine side to kids with Williams that makes them very endearing to be around.

“Jade has been a blessing. She’s such a sweet kid. Jade needs more help and support, so when people don’t understand that and sort of lose their patience, that’s what gets me irritated. I can’t say enough good things about the Unionville-Chadds Ford School District. They have been tremendous. The people around us have been great. You need to have patience and understanding, and Jade’s helped me become better in those areas.

“People come up to us all of the time to say how much they love being around Jade.”

Tonight, Jade will receive her black belt in karate, the first person with special needs to do so at the East Coast Karate Institute, Glen Mills, Delaware County.

Click here for more information on the Philadelphia Walk for Williams.