It's grape season, and Lenny Procacci is selling them by truckloads 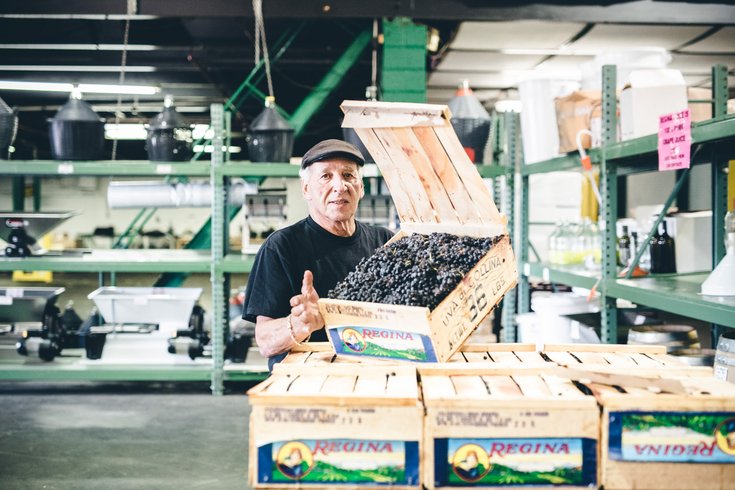 Lenny Procacci, the last grape merchant in Philadelphia, sells 27 varieties of the fruit from a warehouse a block away from the Stadium Complex. During the grape season – Labor Day to Columbus Day – he works 12-hour days, seven days a week.

On Sunday morning, three hours before the kickoff of the season opener, Eagles fans surrounding Lincoln Financial were sending up sweet barbecue smoke from their tailgating parties.

Meanwhile, two blocks east of the stadium, men and women driving SUVs and pickup trucks were fighting their way through game day traffic to reach the site of another fall ritual.

The start of grape season.

At Procacci Bros., on the corner of Pattison Avenue and South Lawrence Street, hundreds of home winemakers made the annual pilgrimage this weekend to buy grapes and grape juice for next year’s wine.

Standing at his desk, Lenny Procacci, the master of ceremonies, was fielding phone calls from anxious customers, who begged him not to close the doors of his warehouse until they got there to pick up their orders. Some home winemakers showed up as early as 6 a.m. to beat the rush.

“My people are in this traffic,” Procacci said, looking worried. “They’re all trying to get here before the game starts.”

Fernando “Fred” DiStefano of Delaware County was one of the home winemakers who came to see Procacci this weekend.

“Lenny, I bring you a bottle of wine,” DiStefano said, as he handed over a bottle in a paper bag.

“How’d it come out,” Procacci asked, as he took a sniff of DiStefano’s concoction.

“Not too strong for me,” Procacci said as he opened the bottle and poured some wine into a plastic cup.

Procacci is a sturdy 70-year-old former Marine dressed in a blue USMC t-shirt, jeans and sneakers, and a “Parris Island Alumni” cap. He said the wine, which smelled of blackberries, brought back memories from nearly 60 years ago.

“This is delicious,” he said, turning to the other customers gathered around him.

“This is exactly the wine that I used to help my grandfather make” when just 12 years old, he said.

Procacci raised his glass in tribute to the wine, as well as his late grandfather, Luigi.

“Every year we made 10 barrels,” Procacci said.

PHOTO GALLERY: Sunday with Lenny: A visit to Procacci Bros.

DiStefano made his wine from three grape varieties: Muscat, a white grape with a big taste and a distinctive flavor; Thompson seedless, the bland white grape they sell in grocery stores; and Alicante Bouschet, a red grape known for its dark color.

DiStefano’s wine is a traditional blend affectionately known among Italian-Americans as “Dago Red.” Serve it with pasta and meat, DiStefano told Procacci, and, “You can’t go wrong.”

Procacci corked the wine and stuck it back in the bag.

“I’ll put this behind my desk,” he said.

As DiStefano watched Procacci’s crew load his grapes into the back of his pickup truck, DiStefano’s son David was flexing his shoulders, getting ready for a busy afternoon.

“He makes the wine,” David said of his father. “I do a lot of the lifting. My arm gets the workout with the crusher.”

He was talking about the old fashioned, hand-cranked wooden machine that his father uses every fall to crush the grapes. Like that hand-cranked crusher, Lenny Procacci is another antique. He’s been selling grapes since Lyndon Johnson was president. 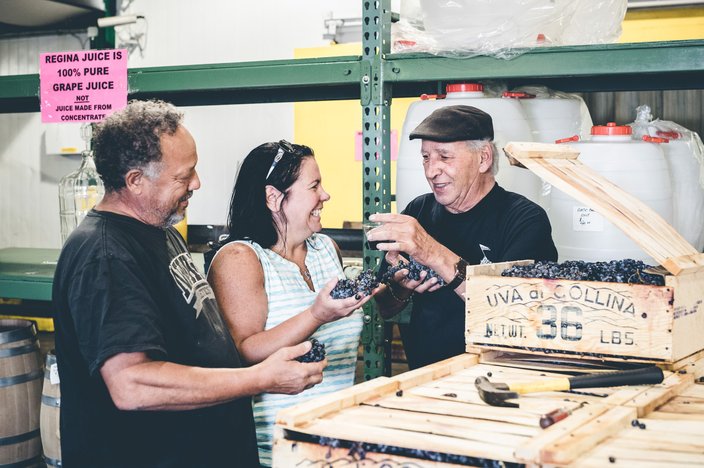 Customers Connie and Frank Dinardo have been purchasing grapes from Lenny Procacci for 18 years to make wine for personal drinking and special occasions, like their daughter's wedding. They stopped in at Procacci Bros. on Sunday. 'Visiting Lenny every year is like Christmas. It's a wonderful time and a highlight of my life,' says Connie Dinardo.

'ALL THESE HAPPY FACES'

When he started back in 1964, Procacci was a teenager helping out his father, Cataldo, a huckster who sold produce in Camden.

“My father would take me every weekend to work with him,” recalled Procacci, adding his job was to drive a pickup truck and make grape deliveries, not only in Camden, but along a route that included West Philadelphia, Wilmington, Delaware, and Kennett Square, Chester County.

On his route, Procacci would sell grapes outside barber shops, a shoemaker’s store, and local Italian-American clubs where men drank wine and played bocce.

For the Procaccis, grapes are the family business.

Fifty years ago, while Lenny Procacci was making deliveries from a truck, his uncles were selling grapes out of railroad cars in the Camden train yards. In those days, there were plenty of places to buy wine grapes.

This time of year, it’s always a party at Procacci Bros. Over the weekend, a picnic table was outfitted with provolone, salami, soppressata, and olives, and sliced Italian bread.

Across the river, in Philadelphia, merchants used to sell grapes out of the B&O railroad yard on Delaware Avenue. On Passyunk Avenue alone, there were at least 10 grape dealers.

But today, the only guy left selling grapes in Philadelphia is Lenny Procacci. He also caters to plenty of customers coming over the bridge from South Jersey, because Procacci’s nearest competitor is in Hammonton, Atlantic County.

When he was a kid, “I hated when grape season came,” Procacci said. “I couldn’t wait till it got over.” That’s because grape season only meant work.

But in the early 1990s, he moved across the bridge and began selling grapes down on Pattison Avenue on behalf of his cousins, Joe and J.M. Procacci, who own the No. 1 wholesale produce distributor in the country.

Lenny began to see his job in a different light.

“Things started getting better for me in the late '90s,” he said. Every fall, “I couldn’t wait for the wine grapes to start up. You’d see all these happy faces coming back every year to make their wine.”

At Procacci Bros., it’s always a party. This weekend, Lenny had a picnic table covered with plastic containers filled with provolone, salami, soppressata, and olives, along with a basket full of sliced Italian bread.

Next to the appetizers was a barrel of wine with a spigot. Customers helped themselves to a homemade mix of Zinfandel and Merlot grapes. While they sipped wine from plastic cups, they filled out order forms.

Wooden crates of grapes and plastic buckets of juice were stacked in four enormous coolers, where the ceilings were up to 40 feet high and the temperature maintained at a chilly 33 degrees. Only a few customers were brave enough to venture into the coolers, to sample the grapes.

Under three flags that hung from the rafters -- America, Italy and Portugal – Procacci was waving order forms and bellowing for his workers.

Ricardo rode off on a hydraulic pallet jack, zipping into one of the coolers, to load some grapes. 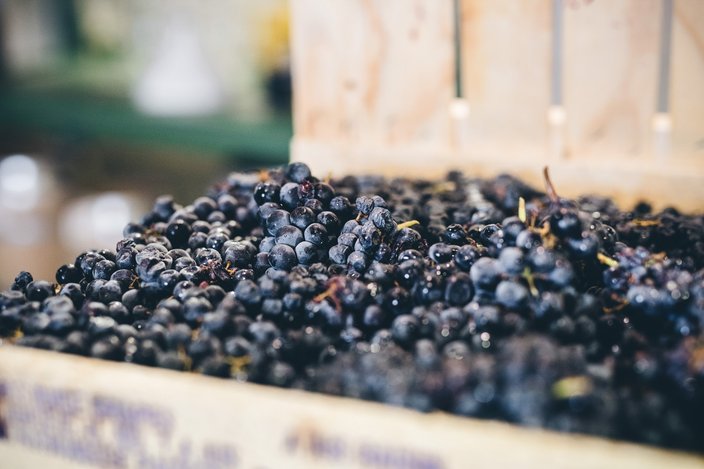 Procacci's grapes come from California. Each crate contains about 36 pounds of the berries. Only a few customers were brave enough Sunday to venture into the enormous 33-degree coolers to sample the merchandise.

'IT GETS UNDER YOUR SKIN'

Procacci’s customers range from beginners, who make wine from 100 percent [not from concentrate] grape juice, to old masters who prefer to crush their own grapes.

“I love Lenny, said Heather McGurrin, who showed up with her friend Sherry Hamburg this weekend to buy the juice to make Petite Syrah and Cabernet Sauvignon.

Procacci greeted the young ladies with a kiss on the cheek.

“I love the fact that it’s pure and there’s no artificial stuff in it,” McGurrin said of her homebrew. It’s a popular gift.

“You bring a bottle of homemade wine and it’s like family,” she said.

McGurrin and Hamburg spent a couple of hours at Proccaci’s this weekend, sampling homemade wines and talking to other customers. They left with smiles on their faces.

“I hope we didn’t overstay our welcome,” McGurrin told Procacci as she was leaving.

Besides the juicers, Lenny caters to the grape guys. Like Vince Novello, who’s been buying wine grapes from Procacci Bros. for 20 years.

“It gets under your skin,” Novello said about winemaking.

Novello is so good at winemaking that he won eight straight best-of–show awards at South Philly’s annual Vendemmia festival at Girard Estates Park, where they judge the best homemade wines. Then, they promoted Novello to master winemaker of the Vendemmia, so he could be a judge.

This year, Novello is making a traditional Bordeaux blend out of Cabernet Sauvignon, Merlot and Petit Verdot grapes. 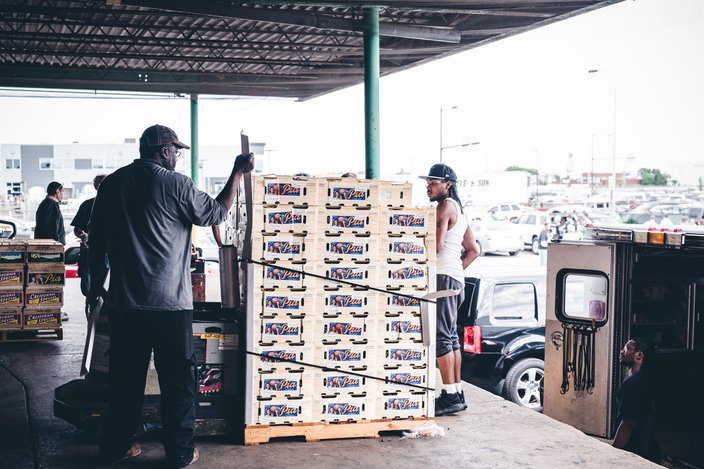 All day long, during grape season, vehicles are loaded up with crates of the fruit destined to become wine. It's not unusual for customers to drive off with thousands of pounds of grapes.

Procacci’s biggest customers are the guys who run the local wine clubs. The clubs began to proliferate during the 1990s, because winemaking equipment was expensive, and not everybody had a big enough place to make wine.

So people began banding together to form wine clubs, where they would share the labor, the cost of the equipment, and of course, the vino.

Billy Yocco heads up the Camden Crush, which began in 1995 with a few friends making a couple of barrels of wine in a garage. This year, some 85 guys working in a warehouse will make 40 barrels of wine.

“We’ve got little boys from 5 years old up to a guy who’s 90 years old,” Yocco said. They always crush their grapes on the first Sunday in October.

“I didn’t know squat. Lenny took me under his wing. He taught me everything I know.” – Danny Angelozzi, who runs the Vino Degli Amici wine club

Yocco, a demolition contractor, didn’t know much about winemaking when he started the club. But he knew where to go for advice.

“Any time I had a problem, I’d ask Lenny,” Yocco said.

He and Guy Ferranti established the club in 2005, working out of a garage. It now has 22 members who make wine in a Pennsauken warehouse.

At Procacci’s on Sunday, Angelozzi placed an order for more than 800 boxes of grapes. This year, his club will bottle more than 2,000 gallons of wine.

Like Yocco, Angelozzi, who sells BMWs for a living, wasn’t exactly a wine expert when he got started.

“I didn’t know squat,” Angelozzi said. “Lenny took me under his wing. He taught me everything I know.”

Angelozzi doesn’t know what he’ll do if Procacci ever retires. But Lenny admits that after more than a half century of selling grapes, it’s something he thinks about.

Selling wine grapes is a marathon. It begins in August when Procacci flies out to California every year to personally inspect the grape crop. Then, on Labor Day, Procacci begins working 12-hour days, seven days a week, usually starting at 6 a.m. He keeps at it until Columbus Day, until he’s taken care of the last of some 4,000 customers.

And every year, Lenny keeps telling himself the same thing, “I hope I can make it through this season.”

At night, when he goes home in Pennsauken, Peggy, his high school sweetheart and wife of 48 years, holds dinner, no matter how late he shows up. Often, he’s so tired he falls asleep on the couch.

Then, after Columbus Day, when grape season is over, he goes fishing.

“You know, as long as I’m healthy and able to do this, I’ll continue,” Procacci said. Because if and when that day comes when he finally has to retire, he said, “It’s going to be a heartbreaking day for me.”

And for all his customers.