The 2014 winner will compete, but it's all in good fun 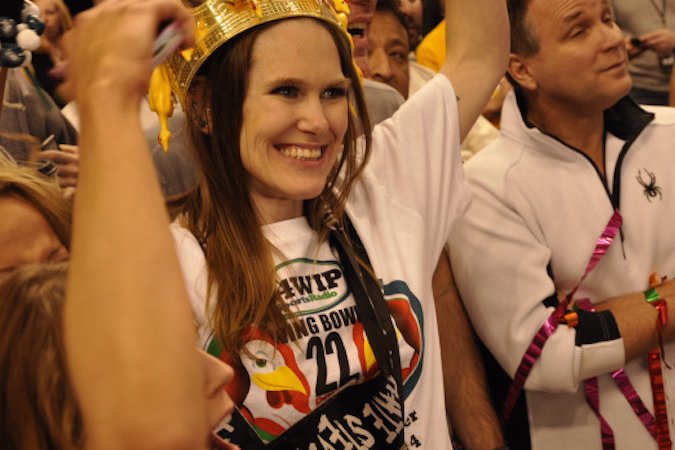 Competitive eater Molly Schuyler wowed the 94WIP Wing Bowl crowd last year when she scarfed down 363 wings in half an hour, beating all previous Wing Bowl records. Granted, the crowd may have been a little delirious and a bit drunk at the time, but the 5'7" mother of four made waves nonetheless. This year, she's coming back for more.

Though Schuyler had completed plenty of food challenges before 2014's Wing Bowl 22, she hadn't competed in a wing competition of its magnitude. When she saw a link about it on her Facebook feed, she knew she had to sign up. One livestream qualifying round later and Schuyler was on her way to the Wells Fargo Center.

For the uninitiated, Wing Bowl is an annual event held by radio station 94WIP where competitive eaters duke it out for big prizes while raucous, usually drunk fans look on. Scantily-clad "Wingettes" escort the competitors to the stage while spectators often throw food and/or drinks at them from above. Oh, and all of this starts around 6 a.m.

This hullabaloo, though, is Schuyler's favorite part.

"When you get into that arena, you’ll never experience that unless you’re part of a Wing Bowl. It’s just crazy. I mean, wow. It’s like you’re on a major sports team and you’re against the world. All these people are just shouting at you. Even if you don’t win it’s ok because you're part of [it]," Schuyler said.

Competitors in Wing Bowl 23, which is Mardi Gras themed and already sold out, will be chowing down buffalo wings from P.J. Whelihan's, though Schuyler prefers garlic parmesan ones on her days off. The overall champ will get a 2015 Harley-Davidson FLSTF Softail Fat Boy Motorcycle, a championship ring and $10,000. The runner up will also get $10,000.

But Schuyler isn't too concerned with the outcome.

"It’s not about winning, it’s about having fun," she said. "I’m just going to go out and have a good time! Win or lose, it’s cool."