Witness: We found a live rat inside a dead body at Philly morgue

As a 'John Doe' was prepped for autopsy, those in the room saw more than they bargained for 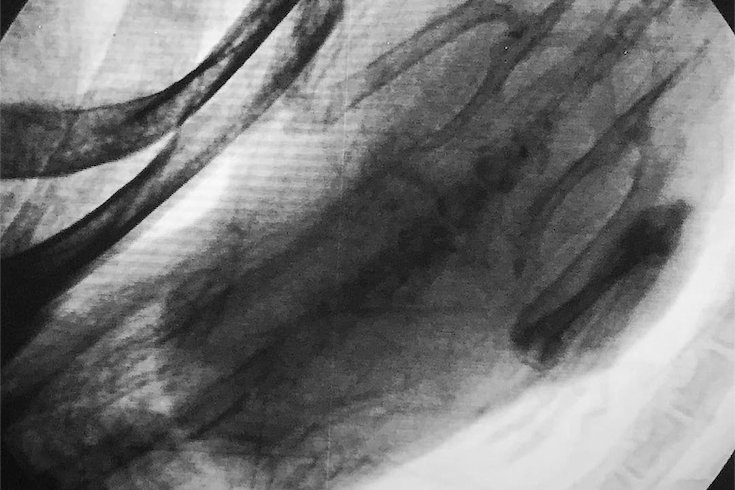 An X-ray image said to capture a rat inside a corpse at the Philadelphia Medical Examiner's Office on February 27, 2019.

The body, decomposed beyond recognition, made its way to a table at the Philadelphia Medical Examiner’s Office in University City for a February 27 autopsy.

Unzipping the body bag, a handful of forensic examiners in the room saw something they’d never seen before.

Something was moving around in the torso of the rotting, still-clothed cadaver with a “decent-sized cavity” where the chest and internal organs once resided.

“There was a rat in the body,” said a witness to a scene straight out of a horror movie. “And it was alive.”

It’s the sort of thing that baffled even those well versed in the nuances of crazy autopsy stories.

It’s also a situation so damn rare we’ll present accounts from first- and second-hand witnesses so it can be entered onto the public record.

The traditionally tight-lipped medical examiner's office would not confirm the story told to  PhillyVoice by the witness in the room, who wished to remain anonymous.

With additional corroboration from secondary sources, here’s what we’ve learned about this unusual case over the past few days.

'DAZED BUT NOT DEAD'

On that Wednesday afternoon, personnel at the medical examiner's office were getting started with an autopsy of an intact, unidentified corpse.

“One of the techs saw movement inside the torso,” according to a source, who heard about the case later that day directly from someone in the examination room. “They quickly and correctly ascertained that one of our town’s prolific Norway rats was living ... in that semi-exposed torso cavity.”

The next move? After an investigator tried to remove the rodent with a metal pole, they zipped up the body bag so it couldn’t escape and called for the city Department of Public Health’s Vector Control Unit to come deal with the rodent they are so familiar with.

After a Vector representative arrived, along with two new hires who remained outside the room, the group brainstormed how best to remove the rat, which had apparently developed a taste for human flesh and organs.

The first effort involved “zapping” the corpse with a "semi-portable X-ray wand" for a minute or two.

“The rat was dazed, practically immobilized, but not dead,” reported a second-hand witness, who added the humans in the room at the time donned safety vests.

"The rat had to be terminated. It was old enough to reproduce. One stomp, and then it was bagged up and thrown away." – Eyewitness

“Because of the radiation, it was not as lively as before,” said the witness in the room, an account mirrored stories being told several days later at the University City offices. “From the way the body was decomposed, the flesh decomposed, the body hollowed out, it looked as if the rat had been in there for a little while.”

Someone from Vector proceeded to yank the animal from the body by hand and – after being asked “you’re not going to kill it, are you?” – stomp it with a boot. This move, while brutal, helped stave off public-health concerns about a rat roaming the city with bloodlust coursing through its veins.

“The rat had to be terminated,” said the eyewitness, noting that no photographs or videos were available of the intruder's appearance but for an X-ray image posted on Facebook. “It was old enough to reproduce. One stomp, and then it was bagged up and thrown away. Everything took about 15 minutes.”

This is quite an unusual tale, and we wouldn’t have believed it ourselves unless the eyewitness confirmed the details we’d heard whisper-down-the-lane style.

Sure, there were stories of “rat torture” from the Middle Ages, World War I’s “trench rats,” and rats entering corpses at a Washington, D.C. hospital in 2014.

Still, what reportedly happened in Philly less than two weeks ago came as a shock to those familiar with the wilder side of autopsies and deaths.

Sara Chavez, director of The Order of the Good Death, which has a mission of “making death a part of your life,” could only come up with one point of comparison.

“Well, that's unusual. The only story similar to this that I can recall is from 1910 about a girl who had several lizard eggs in her stomach that hatched,” Chavez shared. "A postmortem examination showed that the wall of the stomach had been attacked by the animals. I have trouble believing any of this, but Dr. Judy is the one to ask about autopsies!" 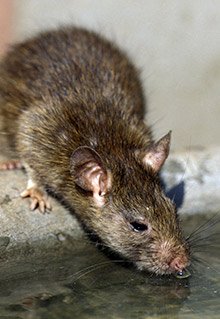 A rat (but not this particular rat) caused a stir recently at the Philadelphia Medical Examiner's Office.

That's Dr. Judy Melinek, a board certified forensic pathologist from San Francisco who’s worked for 18 years in “big city morgues” like New York City, Oakland and in her current hometown.

“I have never seen a rat emerge from the inside of a dead, decomposed body, even though I have seen evidence of rodent depredation on cadavers,” she shared, but left “wondering whether this is just a myth or a prank.”

The eyewitness account lent substantial validity to an otherwise unbelievable tale, though.

So how did the rat get there? Nobody can be exactly sure, but there are some hints.

The medical examiner's office isn’t overrun by rats, so it’s likely that the rodent got caught up when the corpse – which remained unidentified as of Monday – was placed in the body bag and brought in for purposes of autopsy and identification. It then got inside the corpse and the rest is stomach-churning history.

As for the mood in the room once everything settled down, the witness in the room said dark humor prevailed.

“Everybody was kind of giddy,” the witness said. “It’s exciting to see something you’ve never seen before.”