The discovery was made at the Betzwood Trailhead in Lower Providence Township, authorities say 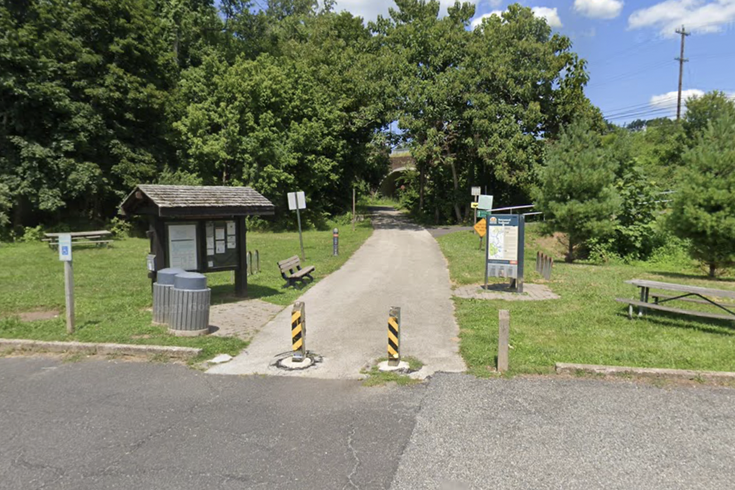 A woman's body was found Sept. 16, 2021, at the Betzwood Trailhead in Lower Providence Township. Her death is being investigated as a homicide. The Betzwood Trail is a 6-mile stretch along the Schuylkill River Trail through Montgomery County.

Read More
UPDATE: Montgomery County prosecutors have charged an Upper Darby man with the fatal stabbing of 23-year-old Karina Torres, whose body was found near the Betzwood Trailhead in Lower Providence Township.
Investigators allege that Freddy Remigio Mendieta Pando, 23, killed Torres on Sept. 11 and moved her body to a location off the trail before confessing to police in Upper Darby on Sept. 16. Mendieta Pando is charged with first-degree murder and related offenses.

The death of a woman whose body was found in a wooded area of the Schuylkill River Trail on Thursday is being investigated as a homicide, Montgomery County prosecutors said.

The victim's body was located by authorities in the area of the Betzwood Trailhead in Lower Providence Township.

Investigators said a man walked into the Upper Darby Police Station in Delaware County to report the apparent homicide.

The man who reported the discovery remains in police custody but has not been charged with a crime at this time, prosecutors said.

The identity of the woman has not been released pending notification of her family. An autopsy by the Montgomery County Coroner’s Office is scheduled for Friday morning.

The Betzwood Trail is a 6-mile path that runs along the Schuylkill River within the boundaries of Valley Forge National Historical Park.

Anyone with information about this incident can call the Montgomery County detectives’ tip line at (610) 278-3648.