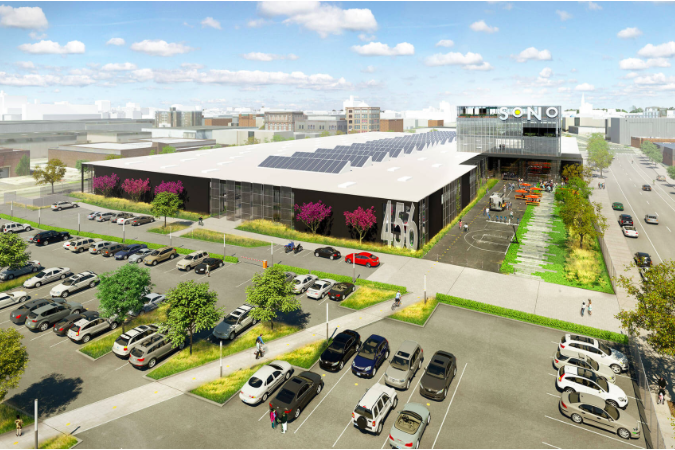 An aerial view of the planned 260,000 SoNo facility to be located at 5th and Spring Garden streets.

In a 2014 study from the Pew Charitable Trusts, demographic research revealed that Philadelphia saw the nation's biggest increase in 20- to 34-year-olds since 2006, as measured by percentage change in millennials relative to each city's overall population. The U.S. Census Bureau estimated that about 100,000 millennials came to Philadelphia between 2006 and 2012, about 26 percent of the city's population, raising the city to around the national median.

The study found several caveats, however, that could influence whether this influx of younger residents plans to be here ten years from now. One of the top concerns the younger generation cited was the city's prospects for work and career development.

Earlier this week, The New York Times reported on the planned renovation of a 250,000 square foot facility located at 5th and Spring Garden streets. The workspace, called SoNo for its location just south of Northern Liberties, is expected to accommodate up to 8 tenants employing between 1,000 and 1,500 workers, according to developer Alliance Partners HSP.

The building, now occupied by a distributor of maternity clothing, aims to become a center for media, advertising and technology companies that will be attracted to the millennial population of Northern Liberties, which continues to develop at a breakneck pace.

Over all, the building’s location and design are intended for a “live-work-play” lifestyle in which young urban professionals live near their workplaces and the shops, restaurants and entertainment sites that spring up to meet that demand in Philadelphia and other cities, said Richard R. Previdi, operating managing partner of Alliance Partners HSP.

The project is another example of recent development efforts, such as micro-housing, geared toward luring millennials and retaining college grads from Philadelphia universities, according to Next City.

A virtual tour of the planned SoNo facility reveals that the 5-level space will include a bike room, a cafeteria, a gym, common spaces, and work environments with 24 foot ceilings.

While there is some concern that the projected cost of office rent in the low $30s per square foot may discourage prospective tenants from choosing the Spring Garden area over Center City and West Philadelphia locations with comparable rents, Philadelphia's deputy mayor for economic development, Alan Greenberger, told the New York Times the area is on track for significant redevelopment in the next 5 to 10 years.