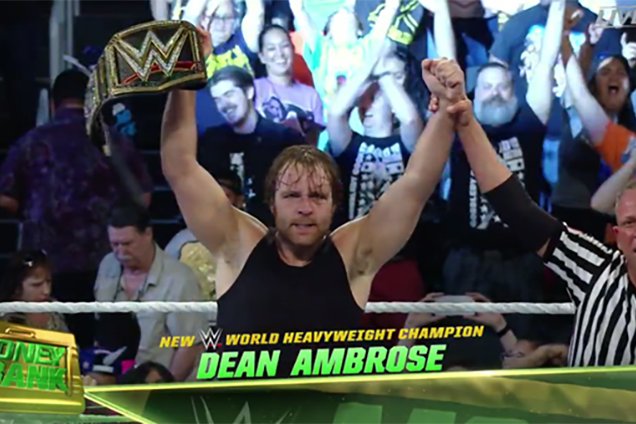 Dean Ambrose won the Money in the Bank briefcase Sunday night and wasted no time cashing in against an old nemesis.

Money in the Bank on Sunday night was promoted for weeks by WWE as being the best Money in the Bank pay-per-view ever. Before buying into the hype, this reminded me of how World Championship Wrestling used to tout every Monday Nitro on TNT as being the “best ever in the history of our great sport,” thanks to Tony Shiavone.

At the T-Mobile Arena in Las Vegas Sunday, it truly was the best Money in the Bank pay-per-view ever. CM Punk’s win against John Cena in the 2011 main event, effectively leaving the company without a contract as WWE Champion, is now a close second.

The pay-per-view started out slow, but that was to be expected with what the kickoff preshow gave us and the Fatal Four Way match for the WWE World Tag Team Championships being an underwhelming opener. Add to the fact that the NBA was presenting Game 7 of the NBA Finals on network television and WWE had quite an uphill battle on their its. But as Game 7 kicked into high gear, so did Money in the Bank.

Let’s check out what happened Sunday night in Vegas:

The Golden Truth [Goldust and R-Truth] vs. Breezango [Tyler Breeze and Fandango]

Though, Breeze and Fandango being burnt due to Goldust and R-Truth hiking their tanning bed temperature up is kind of funny. I’ll give this storyline that much time.

The Golden Truth got the win after R-Truth hit the Neutralizer on Breeze and Goldust hit the Final Cut on Fandango to get the win.

Your winners: Goldust and R-Truth

The highlight of this match was Mauro Ranallo exclaiming, “’Game of Thrones’ isn’t the only show that has flying dragons!” Ah, high flying wrestlers. Gotta love them. The Lucha Dragons got the win after Kalisto hit the Salida del Sol on Bubba Ray as Sin Cara tagged in and hit a swanton bomb, to which Ranallo referred to as the Dragon Bomb, to get the victory.

The New Day © vs. Enzo Amore/Big Cass vs. Karl Anderson/Luke Gallows vs. The Vaudevillains

Enzo Amore, Big Cass and The New Day bookended the entrances with pretty good promos. I know they’re great at promos, but it was pretty glaring that The Vaudevillains and Gallows and Anderson didn’t get any mic time.

But that didn’t ruin the match. Some bad botches and missed spots put a damper on this one as the official opener for the pay-per-view. Kofi Kingston missed Trouble in Paradise because of a miscue from Amore, and Gallows just stood there as Big E took his partner up for the Big Ending and instead of Gallows trying to attack him, he just stood there waiting and then went after another wrestler. Didn’t make much sense, and someone definitely missed their spot there.

After watching Breaking Ground: Reloaded on the WWE Network earlier Sunday, I was pulling for Baron Corbin to win this match in convincing fashion. That seemed to be what happened after he hit Dolph Ziggler with End of Days and got the win. Not much else to say about this match. Hopefully, Corbin can move into a better feud now.

Charlotte and Dana Brooke vs. Natalya and Becky Lynch

I didn’t have big expectations for this match simply because I wasn’t feeling the storyline. Charlotte should be involved in a higher profile storyline right now and compared to the three biggest matches of the night, a match involving the Women’s Championship or even a shot at the Women’s Championship in the future would’ve held a much higher standard than this tag team match.

For what it’s worth, the tag match was good. I never doubted that. And I actually liked the angle after the match was over. The finish came when Natalya had Charlotte locked in the Sharpshooter, but Brooke came in and grabbed her hair to try and get her off. Lynch tried coming in and pulling Brooke off, but Brooke made a nifty move and shoved Lynch into Natalya, leading to Charlotte hitting the Natural Selection on Natalya for the win.

Your winners: Charlotte and Dana Brooke

Apollo Crews made his first main card pay-per-view debut on the main roster against Sheamus. I thought the two had a pretty good story going into the match, but it’s taken a long time for it to come to fruition. Maybe a little too long.

But that didn’t stop Crews from making an impact and kudos to Sheamus for helping in that process. After hitting Crews with White Noise from the middle rope, Crews kicked out and took advantage of Sheamus sitting there in shock to roll him up with a crucifix and pin him for his first pay-per-view win.

And it’ll be the first of many for him.

This match had a huge dream match feeling to it going in, and that’s probably because WWE has been hyping it as such. I think they convinced me I’ve wanted to see this match forever. But it’s definitely a big match that could’ve taken place at a WrestleMania, much like the night’s main event.

So, I figure we’re lucky to get to see it. And we were.

Both guys put on a world class performance in a match that told a great story with both guys countering each other, hitting their signature moves only to have the other kick out. Styles also countered an Attitude Adjustment attempt into a Calf Crusher, which was pretty phenomenal. No pun intended.

The infamous referee bump occurred when Cena went for another Attitude Adjustment and Styles’ feet kicked the ref unconscious outside the ring. It was then that Anderson and Gallows made their way to the ring and hit the Magic Killer on Cena. If you’ll remember, Styles signed a contract that wouldn’t involve his teammates from The Club, and it seems like they were pushing that Styles didn’t know his teammates interfered.

Styles got the win after Anderson and Gallows threw him on Cena’s lifeless body for the three count.

If Styles did know his teammates interfered, he sure doesn’t care.

Money in the Bank Ladder Match

This match was just about what we’d expect from a Money in the Bank Ladder Match. There were lots of high bumps off the ladders and turnbuckles and bumps on the ladders. There were teases as to who would capture the briefcase like there always are, and they almost had me fooled at one point. I thought Sami Zayn would come away with the briefcase, but Jericho wouldn’t let that happen.

In a pretty cool spot, two ladders were set up in the foot space between the ladder in the middle of the ring so they could connect to the middle turnbuckles. We saw all six competitors fight on all three ladders which made for a neat visual.

Owens would hit his bullfrog splash onto Ambrose who was lying on a ladder and also powerbomb Zayn onto another ladder, but my favorite to win the match would be out of it after Ambrose got the better of him as he crashed through the ladder set up in the turnbuckle. The Lunatic Fringe then unhooked the latch to become the 2016 Money in the Bank briefcase winner.

Your winner and new Money in the Bank contract holder: Dean Ambrose

I felt bad for these guys, mostly because I didn’t see this match at all. I was watching the end of Game 7. Rewinding back, I’m almost glad I skipped this. Unfortunately, this match was in the death spot even for people inside the arena.

Titus O’Neil had his sons at ringside and gave them both hugs and kisses before taking on Rusev for the chance at becoming United States Champion. Once the bell rang, Rusev went out to stare down O’Neil’s kids before both wrestlers ran into each other with double clotheslines.

As the match went on, Rusev yelled at O’Neil’s kids in Bulgarian, which seemed to ignite a fire in the former WWE World Tag Team Champion, but it wasn’t enough. Rather quickly, Rusev retained the United States Championship after making O’Neil tap out to The Accolade.

After the match, Rusev confronted O’Neil’s children and told them he was a loser.

This match was supposed to take place at Survivor Series last November before Seth Rollins injured his knee, and WWE wasted no time in putting this back together when Rollins was cleared with Roman Reigns as champion. These two have had great chemistry on opposite sides over the last two years since Rollins turned on The Shield, effectively breaking up the group.

Sunday night was no different. The match was good, but was met with some apathy from the crowd since the event went a bit long and I’m sure many were paying attention to the ending of that amazing Game 7.

Reigns went for the spear, but Rollins countered with the Pedigree, but the champion kicked out at two. Shocked, but not shaken, the challenger then grabbed his nemesis off the mat and hit him with a second Pedigree and pinned him to become a two-time WWE World Heavyweight Champion.

But that wasn’t all. We were already 20-plus minutes past 11 o’clock when the Lunatic Fringe’s music hit and the Money in the Bank briefcase winner cashed in his contract. Attacking from behind instead of coming through the main entrance, Ambrose hit Rollins in the head with the briefcase before officially cashing in the contract with the referee, who was on the outside checking on Reigns.

After Lilian Garcia made the official announcement, Ambrose hit Rollins with Dirty Deeds and won the WWE World Heavyweight Championship.

All three members of The Shield held the world’s biggest title on June 19, 2016. What an amazing moment, which occurred shortly after the Cleveland Cavaliers’ won the NBA title.

Rollins won the title cleanly over Reigns. Who even thought that would have happened? This seemed to be the reign to solidify Reigns as the top dog in the company, maybe even eclipsing Cena. Losing his title this quickly wasn’t something I even thought was possible.

But WWE threw its own rulebook out the window Sunday night. Ambrose is the champion, but for how long? Reigns lost clean to Rollins, so will he get that back down the road? I’d guess yes.

But, for now, we should all enjoy this. Will Ambrose’s character take a turn? What happens with Reigns? Rollins won cleanly in his first match since November. There are plenty of questions heading into Raw tonight. Maybe we’ll get some answers in the Raw roundup on Tuesday. Stay tuned.