WWE Fastlane results: Goldberg is 'The Man' once again 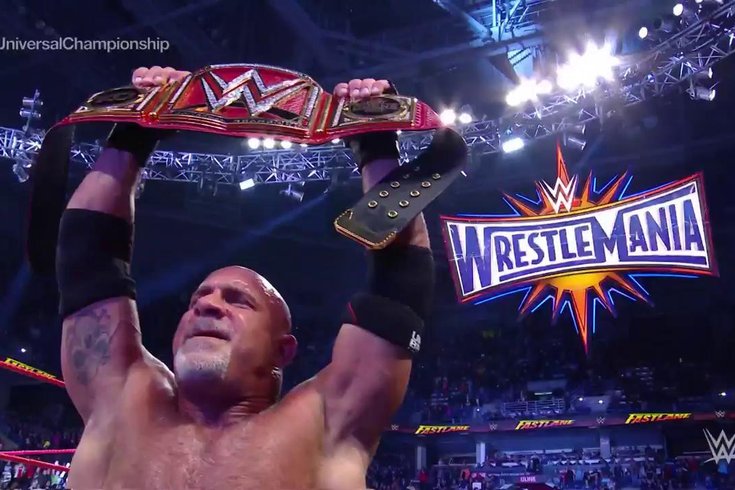 In his first championship match in WWE in over 13 years, Goldberg defeated Kevin Owens to win gold on Sunday night.

The BMO Harris Bradley Center in Milwaukee was the site for WWE’s March pay-per-view offering on Sunday night, the Raw brand’s Fastlane. The card looked very good on paper, but as the matches played out, it left a lot to be desired. Let’s get to the results:

This was a good cruiserweight tag team match. Swann got the win after hitting the corkscrew 450 splash on Dar. Good stuff from these guys.

This was Samoa Joe’s first WWE pay-per-view, and there was no doubt in anyone’s mind that he wasn’t coming out of it the winner. This was a good opener – not the best match the two have had by any means – but it made Joe look like The Destroyer’s he’s been portrayed as. Zayn put up a valiant effort, but Joe is just too good and was just brought up to the main roster. He’s not losing anytime soon.

Here’s a match I was looking forward to, but it could have been much better. I pegged this as the possible Raw Tag Team Championship WrestleMania match, but now I don’t think a rematch between these two teams will do the trick. It wasn’t a bad match, but the tag team division as a whole seems to be looking for an identity ever since The New Day lost the titles. Amore and Cass are still pretty over, but has the moment to put the titles on them passed?

The champions retained the titles after Gallows shoved Amore’s leg off the ropes while the referee counted Anderson’s pin.

Here’s somewhat of a surprise. Jax didn’t demolish Banks as she’s done in the past, and Banks got a rollup win over her nemesis. This may lead to Jax demolishing Banks once again either Monday night on Raw or in the next few weeks. Or, it may lead to Banks becoming a more viable threat in the women’s division and we could possibly see a four-way match at WrestleMania? Either way, this was a better match than I expected with a surprise ending.

During the Kickoff Preshow, Raw general manager Mick Foley said that Rusev and Jinder Mahal, who are now no longer a tag team, would each get an opponent and it’d be up to them to decide who wrestles first. Cesaro just so happened to be Mahal’s opponent, and the Swiss Superman got the win after a tremendous uppercut to Mahal.

Shortly after the previous match, Rusev beat down Mahal and got rid of him, prompting the Big Show’s music to hit. Show absolutely dominated Rusev most of the match, and hit three chokeslams and a knockout punch to get the victory.

Is Shaq in Big Show’s future? We’ll soon find out. But that was a pretty impressive showing for the big man.

The Cruiserweight division debuted in September 2016, and it seems to finally just be getting its identity on television. 205 Live has been better in recent weeks on the WWE Network, and the Kickoff Preshow tag team match was very good.

Not to be outshined, Neville and Gallagher really brought their working boots to Milwaukee on Sunday night. The moves were crisp, the story of the match was good, and the two had the best match of the night up to this point by far.

Neville got the win after hitting the Red Arrow on Gallagher after countering a high-risk maneuver attempt.

This was easily the match of the night. Strowman has evolved so quickly since the fall season that I actually look forward to every match he’s booked in now; even when he faces jobbers. Strowman and Reigns had a great match with various kickouts from finishers and a huge splash attempt by Strowman from the top rope that still leaves me somewhat flabbergasted. How is a guy his size able to do that? Strowman bumps like a champion, too. I feel before this calendar year is over, Strowman will be holding a World Championship on either Raw or SmackDown.

This had the makings of a classic heading into Sunday night, but this match severely underperformed. It was a good match, despite a clear botch by Bayley and Charlotte in the middle of the match, until Banks came down to the ring for whatever reason. Flair wasn’t exactly cheating her way to victory until Banks came to ringside as she rolled up Bayley with a handful of tights that allowed Banks to grab the referee’s attention and give him a heads up. Bayley would eventually hit two Bayley-to-Belly suplexes on Flair, one on the outside of the ring and one in the middle for the three count to retain the Raw Women’s Championship and end Flair’s pay-per-view winning streak at 16.

As the pay-per-view rolled on and on, it was fairly obvious that the main event would not take up too much time. Adding segments such as the Rusev/Mahal matches and The New Day’s promo, the writing seemed to be on the wall when the main event was slated to begin after 10:50 P.M. EST.

Owens didn’t even wait for the bell to ring to start the match before he headed to the outside of the ring to play a little mind game with the challenger. In fact, he did it three times. Great stalling tactic, and big time heel move considering most of us were excited to see Fastlane just end. But there were a couple more surprises.

When Owens was ready to go and told the referee to ring the bell, Chris Jericho’s music hit and he came out to the entrance stage and glared a hole into his former best friend, distracting Owens enough to allow Goldberg to capitalize instantly after the bell was rung. One spear. One Jackhammer. And we have a new WWE Universal Champion – Goldberg.

Jericho walked to the back as Goldberg celebrated with his family.

It was a very underwhelming WWE pay-per-view offering on Sunday night. There were many misses in what was actually not a bad card on paper.

Joe-Zayn could’ve been so much better than it was given what we know and how we’ve seen these two perform in the ring together in the past. It was still a good opener, but it sort of set the tone for the lackluster show we saw after.

WWE could have saved both Bayley’s Women’s Championship win and ending Charlotte Flair’s pay-per-view streak for WrestleMania. Yes, I get that. It doesn’t really bother me as much as it does others simply because I’m not going to allow myself to be annoyed by things that happen on a program I have no control over happen before they’re “supposed to.” That being said, I understand why fans are perplexed why certain “WrestleMania moments” were given to us before the show, but it doesn’t make the moment any less great to me.

I’m glad they ended Flair’s pay-per-view streak. It likely wasn’t something they decided to do before her first pay-per-view on the main roster, and they needed to end it so it didn’t really interfere with any other possible storylines in the future. Kind of how Undertaker’s WrestleMania streak ended.

Strowman is amazing. We’re finally seeing why WWE was high on this guy a couple of years ago, and he’s improved drastically inside the ring.

Goldberg winning wasn’t exactly a surprise, and at least it didn’t make Owens look like a complete fool. Sure, I find it funny when wrestlers still are distracted by theme music, but in this case, it made complete sense. Owens laid out Jericho for what he thought was for good. Jericho’s back. Owens should be mystified. And he was.

Goldberg and Brock Lesnar now vie for the WWE Universal Championship at WrestleMania. Their first title match against each other. It should be a good one.