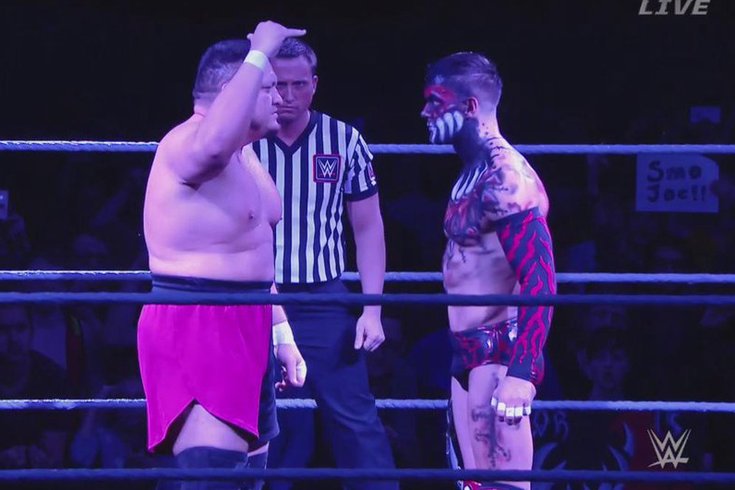 NXT invaded London, England on Wednesday at the SSE Arena for their last WWE Network special of the year. From the beginning of 2015, nobody could have guessed how far NXT would come in one short year – the developmental brand begun going on tour, including a stop in Philly in May, they’ve had specials before big pay-per-view events, and they’ve now toured overseas without the main WWE roster. They certainly are a separate brand.

London would be the place that NXT Champion, Finn Bálor and Samoa Joe would start their war, as the former tag team partners have been on a collision course since Nov. 4, when Joe turned on Bálor after his NXT Championship match against Apollo Crews.

Known all over the world from their previous stops in professional wrestling, Bálor [known previously as Prince Devitt] and Joe would engage in the first match of what could possibly become one of the best and most historic feuds in NXT history. Their main event match on Wednesday was surrounded by a lot of hype, and the two delivered.

The official attendance for the event was announced as 10,079 and completely sold out. Sure, it’s not a sold out Barclays Center in Brooklyn, but it’s still awesome for these future superstars to have this opportunity and make the most of it.

Here’s what went down in London on Wednesday:

Asuka has been one of the best female wrestlers in the industry for the last ten plus years in Japan, and now that she’s bringing her style and grace to the WWE ring, it really makes everyone that much better. If you remember Emma, the last time she was an important part of the main roster was when she was partnered with Santino Marella as a comedy act. She’s shown she can be so much more than that, but, unfortunately for her, this match was all about Asuka.

.@WWEAsuka just has that look in her eyes... #NXTTakeover pic.twitter.com/t0nLZZ2EPi

Asuka dominated a lot of the match before Emma was able to get any offense in. Dana Brooke, who wa in Emma’s corner, tried to get involved multiple times, but Asuka was able to overcome those attempts. Emma was able to manipulate the referee’s placement in the ring and “accidentally” back into him in the corner, forcing Asuka to let go of the hold. Brooke would throw an object in the ring just as the ref was coming to, but Asuka took hold of it, and it looked like the ref was about to disqualify her.

Emma would use this opportunity to roll up Asuka for a pin attempt, but she kicked out and was able to latch on the Asuka-Lock again, and let go when Emma tapped out while the referee was distracted by Brooke. Asuka would hit Emma with a lethal spinning heel kick right to the jaw for the win.

After @DanaBrookeWWE got ejected from ringside, @WWEAsuka caught @EmmaWWE with a HUGE kick for the win! #NXTTakeover pic.twitter.com/lV1il2Q5ta

This match is just another example of why we don’t need just one women’s match on a card nowadays, especially in NXT. This was a fantastic opener and really made Asuka a household name in America if she wasn’t already. She’ll definitely fit well in WWE as long as they use her right. And by that, I mean keep her away from the main roster as long as possible.

Not in London, apparently. During this fantastic tag team match, the crowd had quite a few original chants through the duration of the contest, and it didn’t take away from the match – it made it better.

Try to use @CarmellaWWE as a human shield, and THAT'S what happens! #NXTTakeover @ScottDawsonWWE pic.twitter.com/Bn9nIad03h

With Amore wearing the flag of the United Kingdom on his ring gear, and the near fall after he hit a big splash from the top rope was really well done. I had thought we had new NXT Tag Team Champions. However, Dawson was able to break up the pinfall attempt, send ‘Big Cass’ into the ringpost on the outside, and then hit a Shatter Machine with Dash to put Amore away and retain their tag titles.

This was supposed to be a grudge match based off Corbin interfering in Crews’ NXT Championship match against Bálor on November 4th, so I was looking forward to it.

"You should have stayed back home in the States! Not even shown up!" - @BaronCorbinWWE to @ApolloCrews #NXTTakeover pic.twitter.com/ozWsfsGjoz

One of the best moments of the match was when Corbin was yelling at Crews after he sent him to the outside, saying he should have stayed in Ring of Honor and stuck to wrestling in gyms instead of being in the ring with him.

Crews would gain the advantage with a standing moonsault, but Corbin would eventually find a way to hit the End of Days and pin Crews for the win.

This outcome surprises me, but Corbin was on track for a win, and this one was big. This would be Crews’ first loss in NXT – he wasn’t going to go undefeated forever.

Nia Jax has already made an impact in NXT, and her destroying Bayley for the NXT Women’s Championship wouldn’t have been that surprising given the height and weight difference between the two competitors.

Before the match, Jax was giving a promo backstage before she was distracted by Asuka, who was just staring at her off camera. When confronted, Asuka just walked away, so it looks like that’ll be the next big women’s feud in NXT, even if it’s for the title or not.

The power of @NiaJaxWWE is on full display... #NXTTakeover @itsBayleyWWE pic.twitter.com/LMVCeGZCLc

Jax, however, looked impressive in this match. Bayley, of course, always looks impressive. The two had a tremendous match that had a lot of great spots, and they saved the best for last. Bayley would lock in a guillotine chokehold as Jax was looking to put her away, and Jax would eventually fight out of it.

The champion is WRENCHING that guillotine in! #NXTTakeover @ItsBayleyWWE pic.twitter.com/hU5vbCGcz4

But Bayley wasn’t done. She locked back on the choke and faded Jax to the point she eventually tapped out.

I’m honestly surprised they had Jax tap out to that, but at least it made some sense and it made both women look great. That’s the thing about NXT – even in a loss, they somehow make the person losing look golden.

As always, Bálor’s entrance was one of the best parts of the buildup to the match.

While Bálor and Joe were only tag team partners for the Dusty Rhodes Tag Team Classic tournament, the two have known each other for a long time. The way this feud was built up was perfect storytelling, although I would have preferred Joe not admit in the promo that what he did to Bálor was terrible, but he would do anything for the NXT Championship. Yes, he should do anything for the NXT Championship, but why say it was a terrible thing to do? He’s a great heel at this point and he should be sticking to the “I’ll do anything I can to win the title” mentality and that nothing short of that is terrible.

This match delivered everything. I’m not sure I can say it any simpler than that. The Demon made his amazing entrance, but that didn’t deter Joe from putting a beatdown on the champion early and often. A few times Joe would go for the Muscle Buster, but Bálor was able to counter and the two would trade jabs back and forth that would make a mother punish both of her sons. Joe locked in the Coquina Clutch, which has been Bálor’s kryptonite, and it looked like we were going to crown a new NXT Champion.

Bálor wasn’t having it. He was able to counter, somehow, and prevent Joe from getting him in the Muscle Buster again off the top rope, slamming Joe to the mat and hitting the Coup de Grace from the top rope to retain his NXT Championship.

After the match, Bálor was celebrating his title win as Joe slowly walked backward up the ramp with the referee’s help.

Back in the ring, Bálor looked a bit out of sorts. He could have been selling the bodily injuries from the match, but he pointed at his head and looked like he was telling the WWE doctor he was dizzy, perhaps due to a concussion. I wouldn’t be shocked if this was just part of a storyline or angle, but I also wish Bálor the best if he is indeed hurt.

The next NXT special will take place two days before WrestleMania in Dallas, on April 1st.

This is the ticket you’re gonna want…@WWENXT the takeover continues. #NXTTakeOver:Dallas. April 1. Tix on sale 12/19 pic.twitter.com/sM6PhHHSW2